1 The strategy of controlled interference is the basis for using mutants to understand development Controlled interference: modify just one part of a complex system and examine how the modification effects development. In the past, embryologists used controlled interference classically to remove certain parts of the embryo to show their importance in development (Spemann’s organizer). Modern developmental biology focuses on individual genes. The genes are altered by inducing mutations or through recombinant methods, and effects on development are studied. Genetic analysis provides much finer understanding than does surgery, however, there are still problems. Pleiotropy: one gene (genetic change) may alter several genetic traits. Polygenic traits: many traits may be influenced by more than one gene Genetic analyses have been effective and represent the future of developmental biology. Mutations are developed by 2 general methods: 1.saturation mutagenesis to create mutations randomly 2.use of recombinant DNA to purposefully create a specific mutant.

2 Saturation mutagenesis Saturation mutagenesis: method for developing mutations in all genes that effect a specific trait. Large numbers of organisms are mutagenized and then bred. Offspring are carefully screened for changes in a particular trait. Loss of function mutants: lessen the function of a gene (most common) Null mutants: completely lose function Gain of function mutants: activate gene in the wrong place or the wrong time Features that are necessary for saturation mutagenesis are small numbers of genes, organisms that are cheap and easy to breed and maintain, short gestation, tolerant of mutagenesis. Drosophila and C. elegans have been used frequently for this work. Mice are not appropriate due to the longer gestation time, expense, smaller litter size, and larger genome size.

3 Drosophila have been used to study pattern formation. Pattern formation: array of elements in a distinct sequence. Drosophila has an intricate body pattern with segments and numerous appendages. They are useful for saturation mutagenesis because they are resistant to X-rays, they have a short gestation, and they are cheap to keep. A large number of Drosophila mutants exist. Estimates are that 200 different genes control overall body pattern in flies. C. elegans: a small nematode (1mm long), that is used to study cell lineage. The most interesting fact about C. elegans is that they always contain the same number of body cells (959) plus about 2000 gametes. This makes it easy to follow a cell to understand its lineage. The are excellent subjects for saturation mutagenesis because they are easy to keep, they mature in 3 days, and they have a tiny genome. They are also transparent so one can see the inside.

4 Arabidopsis thaliana: mouse ear cress, is the model for plant mutagenesis and development. It has a very small genome and it can reproduce in test tubes. It is possible to use saturation mutagenesis with this plant. Zebrafish: Danio rerio, is the best suited to study development in vertebrates. It is small and cheap to grow. It is tolerant to saturation mutagenesis. The embryo is free living and clear, so it is possible to see developmental changes on the inside.

5 The house mouse, Mus musculus, is an excellent genetic model of vertebrate development. Mouse and human development are very similar, and many genetic diseases in humans have a counter part in mice. Unfortunately, saturation screens are not possible due to the expense of maintaining animals, smaller litters, longer maturation time, and their larger genome. White spotting Piebaldism However, more direct methods have been used with great success to study mouse development. Genes can be specifically mutated in the lab and directly introduced into mice. This results in a transgenic mouse that contains the transgene in all cells of the body. Alternately, genes can be knocked out to see what happens to development when they are missing. How can specific genes be altered in mice?

6 Strategies for overexpression, interference, and knockout of specific genes Loss of function, null, or gain of function mutations in many genes can be created very specifically using molecular biology. The first step is to isolate the gene and clone it into an expression vector. The gene can be modified several ways: 1. Overexpression (gain of function): the normal gene can be attached to a strong promoter so that high levels of protein are produced. Expression can also be directed to any tissue by cloning it into a tissue specific promoter (ie, express a muscle cell gene in liver). The gene is then introduced into an appropriate cell. An embryonic stem cell to study in vivo function or any cell line to study function in vitro.

7 Overexpression of growth hormone produces giant mice An example of this technology was a early experiment performed with with growth hormone gene cloned into the metallothionine promoter. This promoter targets expression to the liver or any cell in the presence of heavy metal (zinc). The normal promoter was cut off and the metallothionine promoter was inserted in front of the growth hormone gene. When the transgenic mice were weaned, they were fed water supplemented with zinc. This turned on the promoter in all cells of the body and resulted in a giant mouse, about twice as large as normal. Why do these mice have stubby tails?

8 2. Antisense RNA (similar to a loss of function mutation): Just flip the transgene so that the complementary strand is transcribed. When the flipped gene is expressed, it naturally hybridizes to RNA from the normal gene. This inhibits translation of the RNA into protein. The complex of dsRNA is also unstable and rapidly degraded. Less of the gene is expressed. 3. Dominant negative mutants (also similar to loss of function): Engineer a gene so that it makes a defective peptide. When the peptide is expressed, it will interfere with the function of the normal protein. For example, if you are studying a protein that dimerizes to function, you might modify one part of the sequence so that it encodes a protein that cannot dimerize, or dimerizes incorrectly. Less of the function is present.

9 Mammals can be transformed by injection of a transgene directly into the egg pronucleus This method allows the scientist to modify any gene, to introduce it into all cells of the mouse, and then examine the effect on development in a species closely related to humans. The fertilized egg is removed and a transgene is injected into the nucleus. The gene may recombine with host DNA. The developing embryo is transplanted to a surrogate mother = poor efficiency. Somatic and germ cells of offspring are tested for the presence of the transgene. This is done using Southern analysis with a transgene-specific probe. The transgenic mice can be bred to form a colony. If 2 transgenics are crossed, you may obtain mice with 2 copies of the transgene.

10 Transgenic or knock out mice can be made from embryonic stem cells An alternate method for producing transgenic mice involves culturing embryonic stem cells from the inner cell mass of the blastocyst. A transgene is introduced into the stem cell and it is transplanted back into the inner cell mass of the blastocyst from another mouse (often a different species with different color). The cell forms a chimeric mouse. Chimeric mouse: a mouse composed of cells of 2 genotypes. If one species is pigmented, it is easy to see which offspring are chimeric. This technology is used to generate knock out mice, where all copies of a specific gene are knocked out or made non functional. This method is more efficient than injection into pronuclei. How is this done?

11 3. Homologous recombination to create a knockout (null mutation): a cloned gene is prepared with one or two exons replaced by an antibiotic resistance gene (neo). The flanking homologous sequences are retained. When introduced into cultured stem cells, the transgene recombines with the normal gene and knocks out its function. This occurs in only a few cells but these can be selected by growing the culture in antibiotic. The purified stem cells are injected into the inner cell mass of another mouse, and the embryo is transplanted to a surrogate mother. Some of the resulting chimeric mice should express the transgene in the germ line. Since only one allele is knocked out, you cross 2 heterozygotes and hope for 25% homozygous offspring. In practice, you often get none because the knocked out gene was important for embryonic development.

12 Cre lox recombination system A new technology can overcome the problem of blocked development. It allows one to study what happens when the gene is suddenly knocked out in adult cells (similar to a mutation that might contribute to cancer). It is useful for studying many important genes that are required for embryonic development. Cre: a recombinase isolated from bacteriophage lambda. It cleaves at all sites in a DNA sequence that have a specific lox site. Construct a cre gene driven by an inducible promoter such as metallothionine. Lox: genetically engineer the gene to be knocked out such that it is flanked by lox sites. Make one transgenic mouse for cre and another for lox. Breed the mice so that one pair is homozygous for lox and also has a cre gene. When these mice are treated with zinc, the metallothionine promoter is turned on and the cre recombinase that is produced in all cells cuts out the transgene flanked by lox sites. This creates a knockout in the adult mouse that would not be possible with conventional methods.

14 Promoter trapping Knockout mice are constructed by homologous recombination, targeted introduction of the transgene to a specific DNA sequence. However, most transgenic mice are constructed by nonhomologous recombination. The transgene can insert anywhere in the genome. Sometimes this creates a problem if the transgene integrates into and disrupts an important gene. Promoter trapping is a variation of transgenic mice developed by nonhomologous recombination. It is designed to identify and isolate genes that are expressed in specific tissues during development. Promoter: a regulatory sequence that precedes all genes. It binds specific transcription factors and turns genes on or off during cell differentiation. In promoter trapping, the transgene consists of a reporter gene (lacZ) that has no promoter and can not be expressed. When this gene is transfected into a stem cell, it integrates randomly into different areas of DNA. If one of these areas is a promoter for a tissue specific gene, the embryo will be colored blue in a selected area (its promoter drives the lacZ transgene). If the transgene is also tagged with a small piece of non mouse DNA, the interrupted gene can be isolated and cloned.

16 Transgenic mice in basic and applied science Analysis of gene regulatory regions: transgenic mice are often made with certain transcription factors or promoter sequences knocked out. This allows one to determine unequivocally that this DNA sequence is involved in tissue specific gene expression. Role of a specific gene in cancer: transgenic or knockout mice are constructed that overexpress or lack specific oncogenes or tumor suppressor genes, respectively. These mice are good tools to identify whether the genetically engineered mice are more sensitive to cancer. A model for human genetic diseases: When certain genes are knocked out in mice, the resulting phenotype often resembles a human inherited disease (i.e. loss of steel factor receptor in mice leads to a phenotype similar to piebaldism in humans). These mice are an excellent model to study how gene therapy can be used to restore the normal gene and correct the disease. 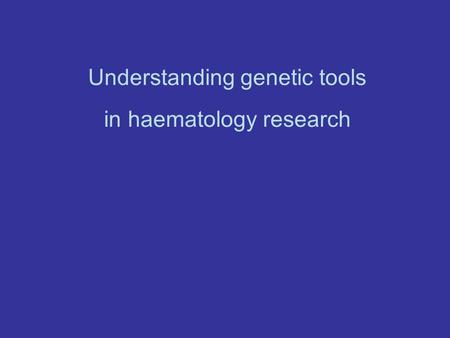 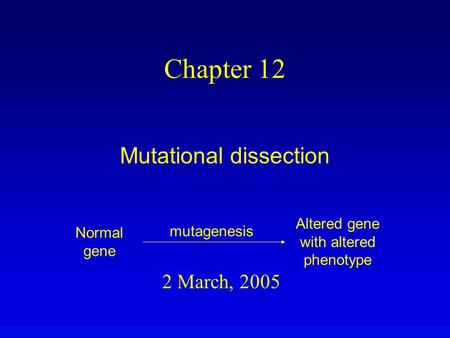 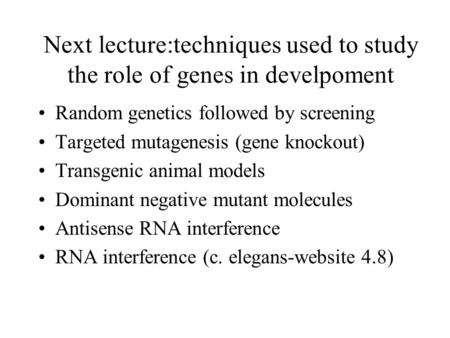 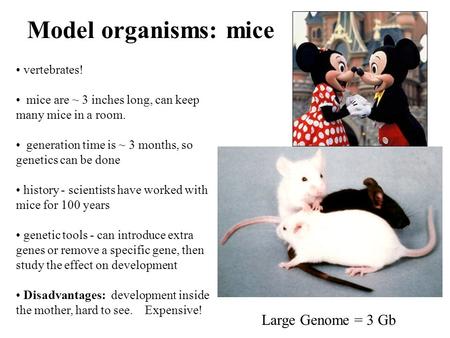 Model organisms: mice vertebrates! mice are ~ 3 inches long, can keep many mice in a room. generation time is ~ 3 months, so genetics can be done history. 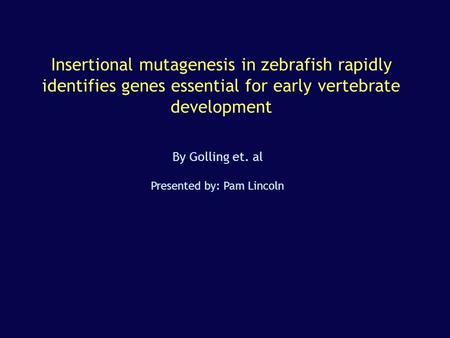 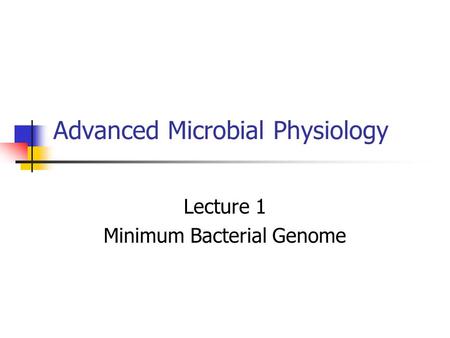 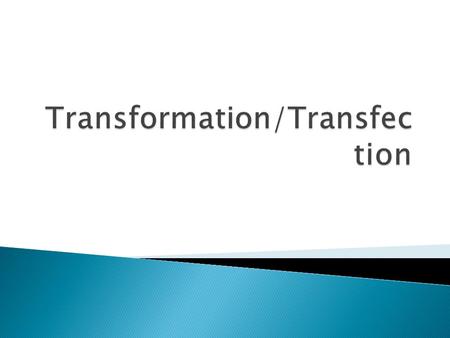 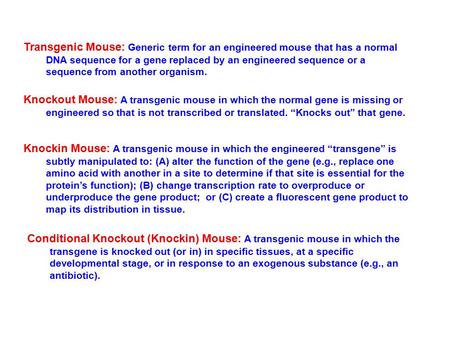 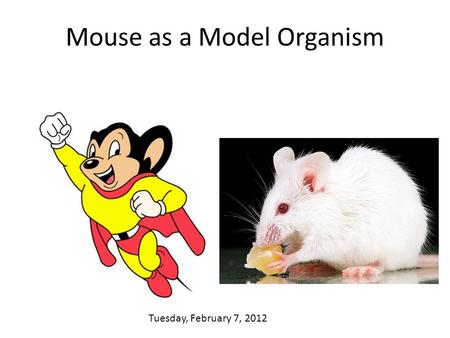 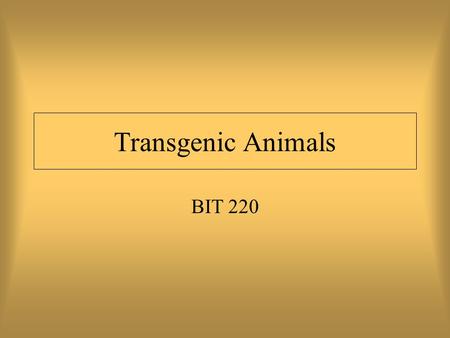 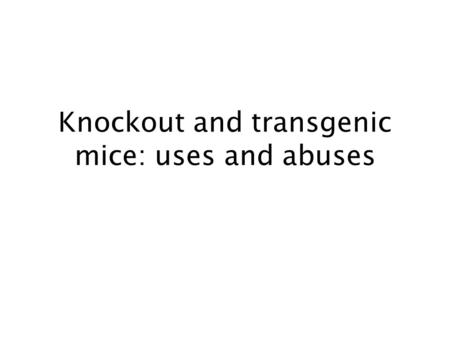 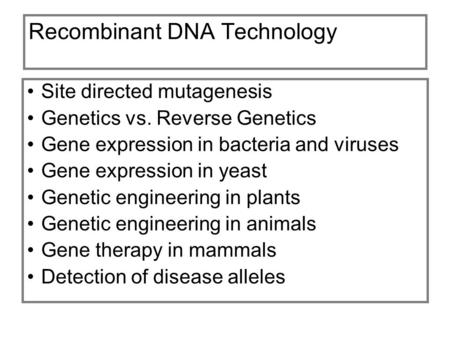 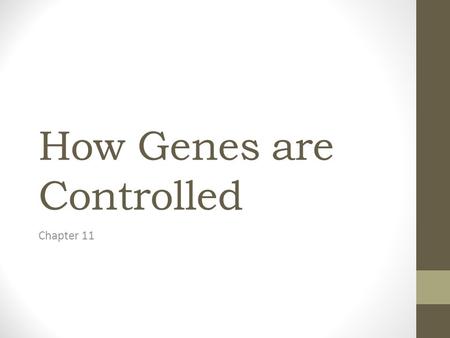