4 In the sixties Warhol started painting daily objects of mass production like Campbell Soup cans and Coke bottles. Soon he became a famous figure in the New York art scene. From 1962 on he started making silkscreen prints of famous personalities like Marilyn Monroe or Elizabeth Taylor. The quintessence of Andy Warhol art was to remove the difference between fine arts and the commercial arts used for magazine illustrations, comic books, record albums or advertising campaigns.

5 The Factory The pop artist not only depicted mass products but he also wanted to mass produce his own works of pop art. Consequently he founded The Factory in 1962. It was an art studio where he employed in a rather chaotic way "art workers" to mass produce mainly prints and posters but also other items like shoes designed by the artist. The first location of the Factory was in 231 E. 47th Street, 5th Floor (between 1st & 2nd Ave). Warhol's favorite printmaking technique was silkscreen. It came closest to his idea of proliferation of art. Apart from being an Art Producing Machine, the Factory served as a filmmaking studio. Warhol made over 300 experimental underground films - most rather bizarre and some rather pornographic. His first one was called Sleep and showed nothing else but a man sleeping over six hours.

6 Nearly Murdered In July of 1968 the pop artist was shot two to three times into his chest by a woman named Valerie Solanas. Andy was seriously wounded and only narrowly escaped death. Valerie Solanas had worked occasionally for the artist in the Factory. Solanas had founded a group named SCUM (Society for Cutting Up Men) and she was its sole member. When Valerie Solanis was arrested the day after, her words were "He had too much control over my life".

7 70's and 80's After the assassination attempt Warhol made a radical turn in his process of art production. In stead of mass producing his art, he now spent most of his time making Individual portraits of USA's rich and famous, such as Mick Jagger, Marilyn Monroe and Elvis Presley. He also started a magazine called "Interview", which is still published today, and even opened his own night club. In 1975 he published his book "The Philosophy of Andy Warhol". Warhol spent his latter years promoting other pop artists such as Keith Haring and Robert Mapplethorpe.

8 When people describe who I am, if they don't say, 'Andy Warhol the Pop artist,‚ they say, 'Andy Warhol the underground filmmaker.' Andy Warhol, POPism Andy filmed from 1963 to 1977 about 150 films. His first film was called Sleep. Sleep is consists of long take footage of John Giorno, his lover at the time, sleeping for over five hours. The film was one of Warhol's first experiments with filmmaking, and was created as an "anti- film". Warhol would later extend this technique to his eight-hour-long film Empire. Andy Warhol's Bad is a 1977 film directed by Jed Johnson (who died on TWA Flight 800), starring Susan Tyrrell and produced by Andy Warhol. It is infamous for a scene where a baby is thrown out a window of a skyscraper by Susan Blond and dies on the pavement. The opening screening in March 1977 attracted over 750 people, including Warren Beatty, Jack Nicholson, Julie Christie and George Cukor.

9 Andy Warhol died February 22, 1987 from complications after a gall bladder operation. More than 2000 people attended the memorial mass at St.Patrick's Cathedral. The pop art icon Warhol was also a religious man – a little known fact. Two years later, in May 1994 the Andy Warhol Museum opened in his home town Pittsburgh in Pennsylvania. 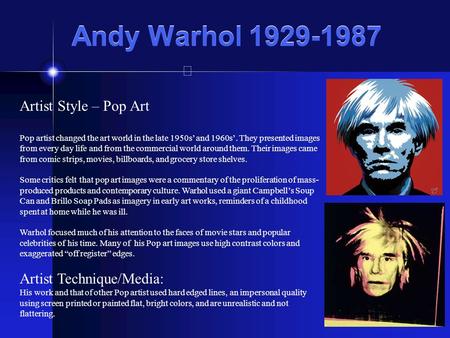