2 Shutter Button1 Pressing the shutter button down halfway focuses the camera’s lens and holding it will lock the focus at that distance. Doing this also displays the current aperture and shutter speed, and gives you a warning if the photo will be over/underexposed or blurry (something will typically blink or flash red, often an ap/ss number). In AUTO FOCUS, your camera will choose from a number of focal frames (rectangles). MANUAL FOCUS mode allows YOU to control the focusing, with either a lens ring, or buttons.

5 Macro Mode2 MACRO MODE is used for taking close ups, it allows you to focus on objects that are closer to the lens than normal focus mode will allow.

8 Aperture4, 5, 6 An APERTURE is an adjustable opening in a camera’s lens. It controls the amount of light that passes through the lens, and functions in much the same way as the pupil of an eye. Bigger opening = more light Smaller opening = less light Aperture size controls DEPTH OF FIELD (DOF), the amount of the picture, from foreground to background, that is in focus. Large apertures (small numbers) = shallow DOF Small apertures (large numbers) = large DOF

12 Depth of Field9, 10, 12 Short for “the depth of the field of focus” refers to how much of a photo from foreground to background is in focus. Smaller Aperture f/11 = Larger DOF Background more in focus Large Aperture f/2.0 = Shallow DOF Background out of focus

13 Shallow DOF 10 Blurriness due to a shallow DOF can also occur in the foreground depending on where you focus!

14 Large Depth of Field11, 13 Everything is in focus from foreground to background. Good for landscapes Small aperture f/16 or f/22

20 Warning, shutter speed is too slow!22 Your picture will be blurry because even the subtle movement of the camera in YOUR hands will be recorded. Typically occurs at less than 1/60 sec with a 50mm lens SLR, but digital cameras now have IS or image stabilization features that counteract the effects of camera shake allowing you to take clear pictures at slower speeds.

26 Exposure compensation (EV +/-) is a quick way to increase or decrease the amount of light entering the camera 1-2 stops in order to achieve correct exposure. It makes the photo appear lighter or darker on your LCD screen. Use it to fix an under or overexposed photo while you’re “in the field” taking pictures. It’s always better to get correct exposure with your camera than to correct it with editing software. Exposure Compensation35

27 Exposure Compensation35, 36 Example: When taking pictures of a bright snowy scene the camera may “squint” and underexpose the photo resulting in gray snow. To COMPENSATE, increase (+) the exposure compensation value (let in more light) until the snow is white again. You are essentially “overexposing” the photo on purpose.

29 The Digital Advantage Digital photographers have the advantage of instantaneous feedback, i.e. they can preview their pictures on the camera, allowing them to compensate for incorrect exposure while shooting in the field. Traditional film photographers have to wait until their photos are developed to see if they turn out. Because of this they often use to use a technique called BRACKETTING, whereby they take 3 different exposures of the same scene (normal, over, under) and hope one turns out correct!

30 Resolution37 RESOLUTION = size of the image (in pixels) 3000 x 2000 pixels = 6,000,000 pixels or 6 megapixels. Higher resolution = ability to make larger prints. 5 megapixels = minimum for a decent 8” x 10” print., without appearing “pixelated” The average photographer has no need for an 18 megapixel camera unless they plan on making very large prints (posters).

34 ISO options on a digital camera

38 Histogram45 A histogram is a graph that displays the relative distribution of shadows, midtones, and highlights in a photo.

39 Histograms… 45-48 Shadows …are useful for helping you determine whether a photo is under or over exposed… …or if has effective contrast (a good range of lights and darks). Midtones (grays)Highlights

42 Light Metering Modes49 Your camera’s light meter measures the amount of light entering the lens in order to calculate correct exposure (this allows the camera to select a correct aperture/shutter speed combination). You can change which part of the frame your camera uses for calculating exposure by choosing different metering modes. EVALUATIVE: default mode (auto metering) camera calculates exposure based on a variety of lighting variables. PARTIAL: meters from center of the frame, useful when there are bright/dark areas around the edge of the frame. SPOT: meters from a small spot in the center of the frame, effective for high contrast scenes where background is much brighter or darker than the subject. CENTER-WEIGHTED AVERAGE: priority given to center of frame, then averaged for whole scene.

43 Spot Metering49 If you were to take a picture of a high contrast scene like the moon, where the subject is bright and the background is dark (or vice versa), spot metering might be a good choice to bring out more detail in the subject. Because the “spot” is typically at the center of the frame, you will need to position the moon in the center while holding the shutter button down half way. Then you can position the moon where you want in the frame and press the button down all the way to take the photo.

44 Spot Metering49 A picture of the moon with a dark night sky will typically turn out with the moon being overexposed (left), because the camera meters off the entire scene and lets too much light in. By spot metering, you can expose for only the subject (the moon) and bring out some of the detail in its surface. A tripod is necessary to avoid blurriness due to slow shutter speed.

47 White Balance For example: If you’re taking a photo in a typical school classroom with fluorescent lights… …switch the white balance mode to fluorescent, so the white objects in the photo will look white and the rest of the colors will also look more natural Fluorescent lights tend to produce a greenish color cast

48 White Mode Comparison All of these photos were taken near the window of a sunlit room. The different white balance modes account for the different color casts. Notice that the incandescent mode adds blue, this is to compensate for the warm yellow/orange light incandescent or tungsten bulbs emit.

49 To Flash or Not to Flash? Due to the bright/harsh light a flash emits, it often makes faces appear too bright while the background remains dark, creating an uneven exposure. Using a flash is preferable to a blurry photo, so if it’s dark enough that your camera gives its shake warning, use the flash. Professional photographers often use a flash with various methods for diffusing the light, or bouncing it off reflective surfaces so the result is not so harsh. 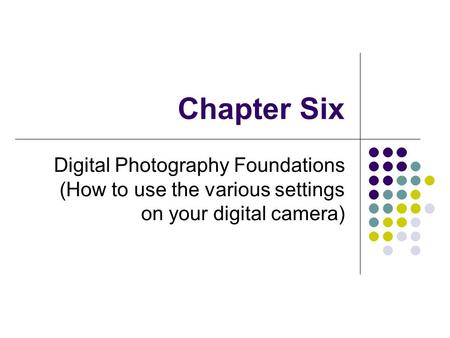 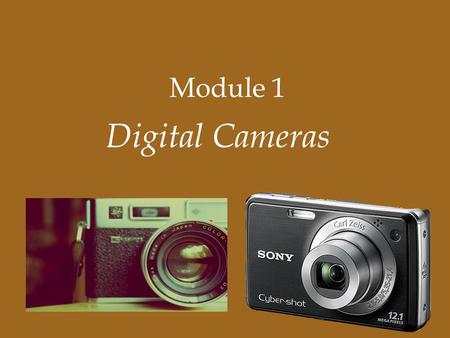 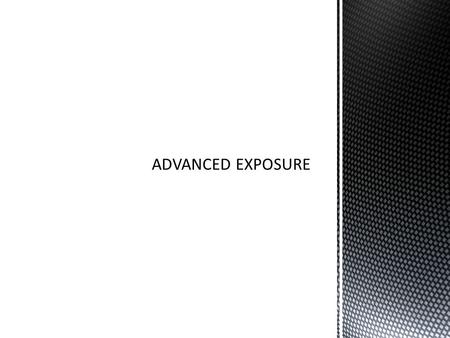 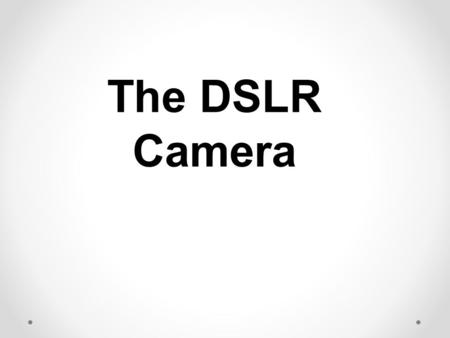