4 Equatorial Pacific SST Departures (oC)
During May-September 2013, well below-average SSTs were observed over the eastern half of the Pacific. In the last couple of weeks, SSTs have been below average between 170ºW-110ºW. Time Longitude

6 Sub-Surface Temperature Departures (oC) in the Equatorial Pacific
During the last 2 months, below-average temperatures developed in the eastern Pacific, associated with the upwelling phase of a Kelvin wave. Recently, negative subsurface anomalies have persisted in the eastern Pacific, while positive anomalies have shifted slightly eastward in the central Pacific. Time Most recent pentad analysis Longitude 6

9 IRI/CPC NINO3.4 Forecast Plume
Most of the models predicted ENSO-neutral to continue into the Northern Hemisphere spring, but some models suggest El Nino will emerge during summer. The consensus forecast favors ENSO-neutral conditions in spring, and the probability for ENSO-neutral and El Nino is equal in summer.

13 Outgoing Longwave Radiation (OLR)
Anomalies (7.5°N-7.5°S) Drier-than-normal conditions, positive OLR anomalies (yellow/red shading) Wetter-than-normal conditions, negative OLR anomalies (blue shading) The MJO was active from late August through early October with the enhanced phase propagating eastward from the Indian Ocean to the western Pacific Ocean over this period. The MJO was generally weak or incoherent for much of November and other types of coherent tropical subseasonal variability were very active. A large area of enhanced convection developed over the Indian Ocean during late November and propagated slowly eastward to the west Pacific Ocean by late January. This feature weakened during early February as suppressed convection propagated from the Indian Ocean to the Maritime Continent. Time Longitude 13

14 200-hPa Velocity Potential
Anomalies (5°S-5°N) The MJO was not active during late July and much of August, but strengthened during late August and September, with eastward propagation of robust upper-level velocity potential anomalies (alternating dashed and dotted lines). Other modes of tropical intraseasonal variability are also evident. From late October to early December, the MJO was not very strong or coherent. There was evidence of coherent eastward propagation at times during this period, but much of this activity exhibited fast propagation speeds more consistent with atmospheric Kelvin waves. A slower eastward propagation of 200-hPa velocity potential anomalies was observed from mid-December to mid-January across the Indo-Pacific warm pool region (red box), while positive anomalies propagated from the Indian Ocean to the Maritime Continent during late January and early February. Time Longitude 14

15 MJO Summary (as of Feb. 10) The MJO remained incoherent during the past week, with influence from more localized subseasonal features, such as tropical cyclone activity over the southwestern Indian Ocea enhanced northern Australian monsoon activity, suppressed convection over South America There is considerable spread among the model guidance resolving the future evolution of the MJO Based on the latest observations and most model forecasts, the MJO is forecast to remain weak during the next 1-2 weeks, while lower frequency signals continuing to dominate the pattern. 15

16 Global and US anomalies in January 2014
N. American Cold events and one diagnosis (prediction) theory drought

28 The major warming events causes a total collapsing of stratosphere polar vortex, as indicated by the reversal of westerly wind to easterly wind surrounding the polar circle In the stratosphere.

30 P anomalies over the United States
January A very dry month Over the west coast, it has been dry since Oct 2013 and in January ,rainfall anomalies were 4mm/day below normal Rainfall also was below normal over the Southeast and the Gulf states Seasonal A very dry season 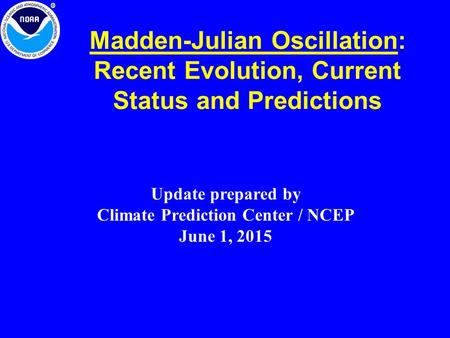 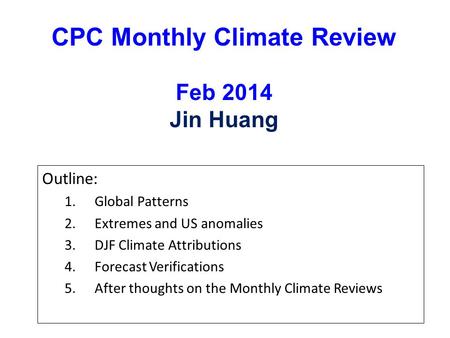 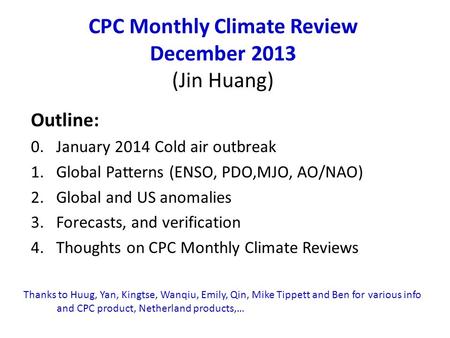 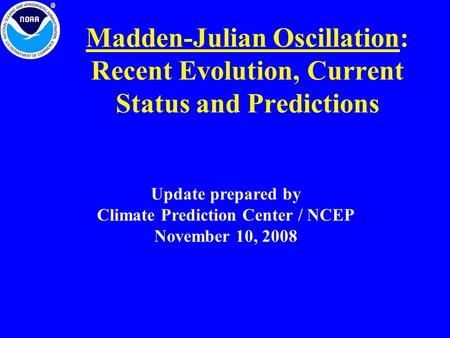