2 Environmental Cues Plants depend on their immediate environment for the materials and energy they require for survival. Plants are relatively tolerant of environmental changes from which they cannot escape. Plant growth and reproduction are synchronised with seasonal changes, and with local physical and climate conditions.

3 The environment provides the cues for many stages in plant growth (flowering, ripening of fruit and seed germination) to occur when conditions are ideal. Plants also respond to gravity, light and temperature. Communication between cells in the plant is required so plant responses are coordinated and controlled. Plants control and coordinate their response using hormones.

4 Hormonal Systems A hormone is a chemical produced by a specific cell(s) in an organism and move throughout to stimulate other cells capable of producing the desired response. Hormones act as messengers between cells to regulate function. They control various metabolic functions including rates of rxn’s, transport of substances across membranes, secretion, and growth.

5 They transmit their signal to specific cells by altering specific biochemical reactions in the cell (ie. Production of an enzyme, turning on or off a gene). The target cell has a specific receptor for that hormone which causes it to be affected. Hormones work by interacting with a receptor on the cell membrane or by passing through the membrane directly into the cell to trigger a biochemical event. Hormones are effective even in low concentrations.

7 Speed Hormonal effects are slower than nervous system responses but often last longer. Plant hormones move much slower as they have to be transported a fair distance to where they take effect in stimulating things such as flowering or causing stems to bend. Hormones are often transported using xylem and phloem, from cell to cell and occasionally by air. Movement of a plant hormone requires energy (ATP molecules) for active transport which is ~10x faster than by diffusion but still very slow.

8 Hormones and Responses of Flowering Plants
In flowering plants hormones orientate the growth of roots, stems and leaves and the timing of reproduction (flowering), fruit ripening and seed germination. A growth response is triggered by environmental factors. When the direction of growth response is related to the direction of the stimuli’s origin the response is called a Tropism. If a plant grows towards a stimulus it’s called positive tropism, growth away from the stimulus is a negative tropism. Pg 265 Hormone responsibilities in plants.

9 Auxins: Phototropism – Reaching for the light
Plants often grow and bend towards a source of light (positive phototropism). This growth is stimulated by a chemical called Auxin diffusing downward from the tip of a growing grass shoot. Auxin is produced continually in a growing tip (meristem) and diffuses through layers of cells as the tip has no vascular tissue. Light interacts with the receptors that control membrane permeability to auxin, thus the auxin moves laterally away from the light.

10 This causes higher concentrations of auxin on the side opposite the light source, which then grows faster and causes the plant tip to literally bend towards the light. Auxins promote growth by working with receptors in the specific growth region causing a softening of cell walls allowing the cells to elongate more rapidly under turgor pressure (high internal fluid pressure), cells outside the growing region appear to lack these receptors.

12 Apical Dominance – One Main Stem
Auxins also affect lateral growth in plants. Auxin is produced in the apical tip moves down the stem and inhibits the growth of lateral buds. This is a phenomenon called apical dominance. This leads to a taller plant with fewer side branches.

13 Gibberellins Promote cell elongation, like auxins, except they promote growth in the entire plant. Gibberellins are also an important factor in promoting cell division, flowering in some plants, fruit enlargement and seed germination. Gibberellins are synthesized in flowers, developing fruits, seeds and actively growing buds, and elongating stems.

15 Abscisic Acid (ABA) These are the best known growth-inhibiting hormones. They have the opposite effect of auxins, gibberellins and cytokinins and are particularly important in regulation of plant function. They help plants to tolerate adverse conditions (drought, salinity, and low temps) by promoting leaf drop, bud and seed dormancy and increasing frost resistance.

16 Synthesized mainly in chloroplasts.
The dropping of ripe fruit, and unfertilized flowers, and leaves in deciduous plants is known as abscission and occurs as a result of the disintegration of a special layers of cells at the base of the organ being dropped due to ABA. Development of seed dormancy and vernalisation requires the presence of ABA to cause gene expression in nuclei. ABA also carries a message when too much water is being lost to close guard cells. ABA is increased particularly in times of drought, high temperature and waterlogging.

17 Ethylene The gas ethylene or ethene (C2H4) is a small molecule, which is released by ripening fruit. One of the effects is the stimulation of fruit ripening. Ripening of fruit is accompanied by colour change and softening of the flesh. These changes help attract animals which disperse the fruit and make it easy for seeds to be released from the fruit. Ethylene increases cellular respiration, breaking down of starches and oils into sugars. Ethylene production is stimulated by auxins and ABA. 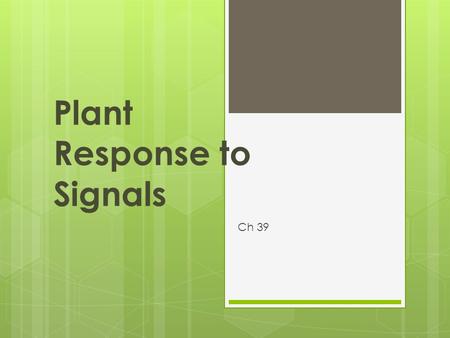 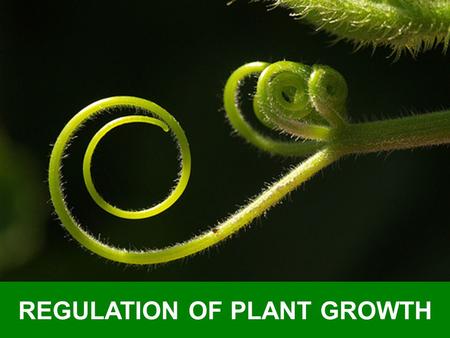 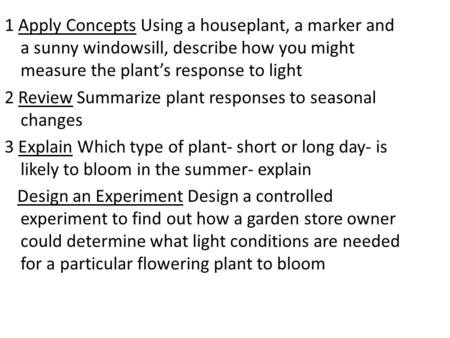 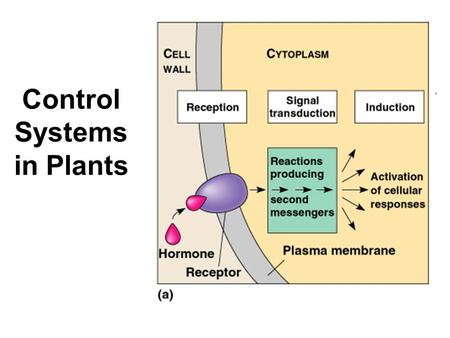 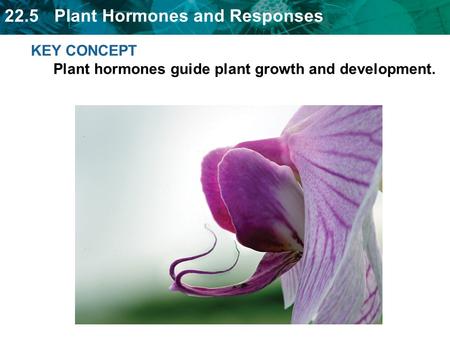 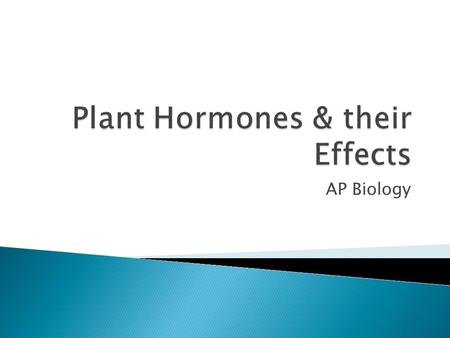 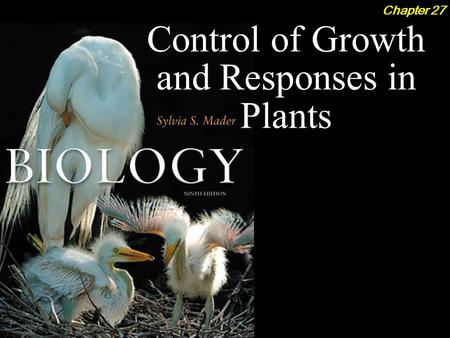 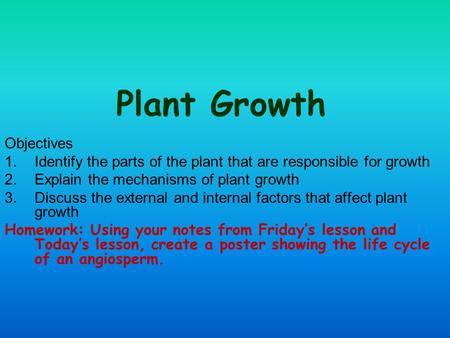 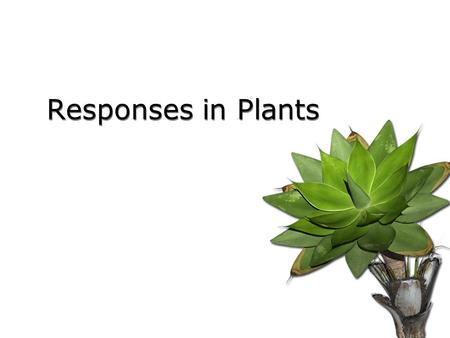 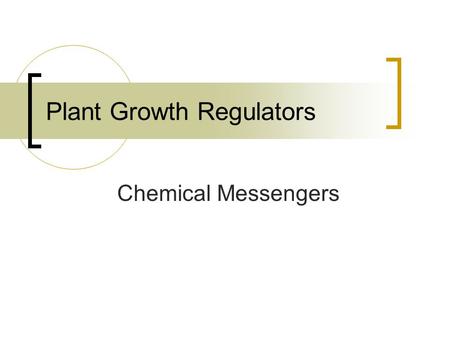 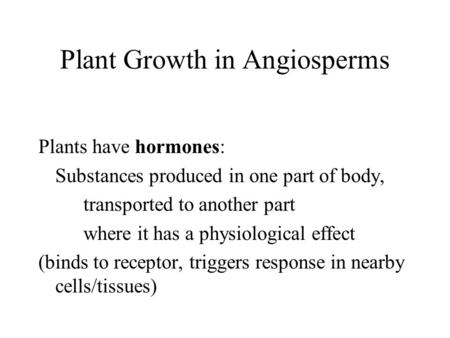 Plant Growth in Angiosperms Plants have hormones: Substances produced in one part of body, transported to another part where it has a physiological effect. 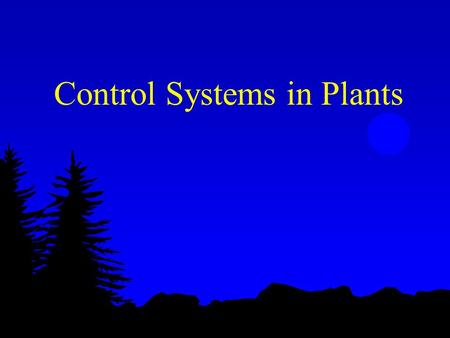 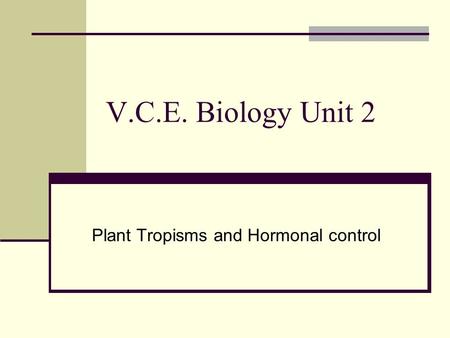 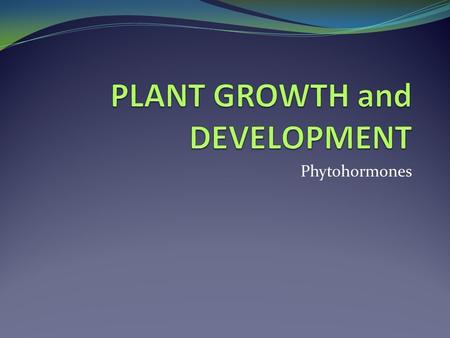 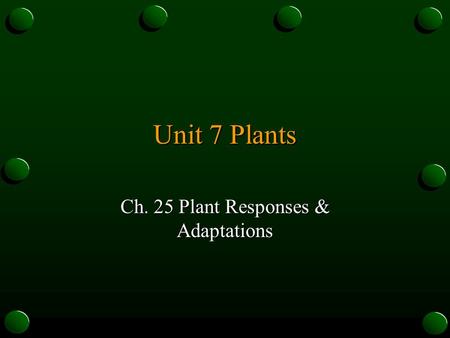 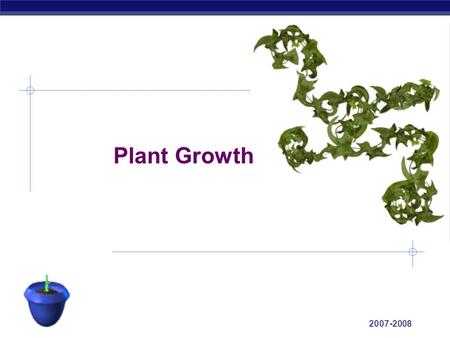 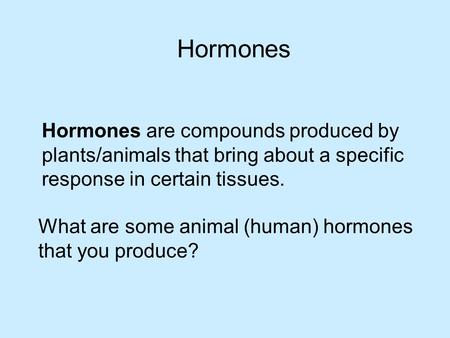 Hormones Hormones are compounds produced by plants/animals that bring about a specific response in certain tissues. What are some animal (human) hormones. 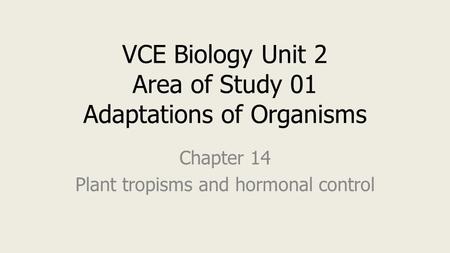 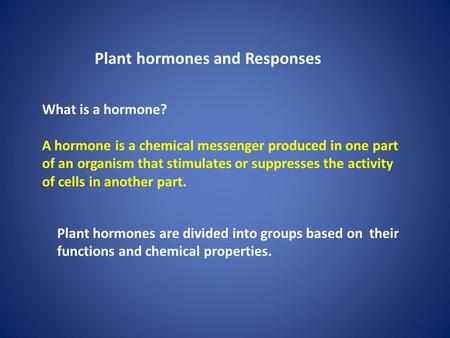 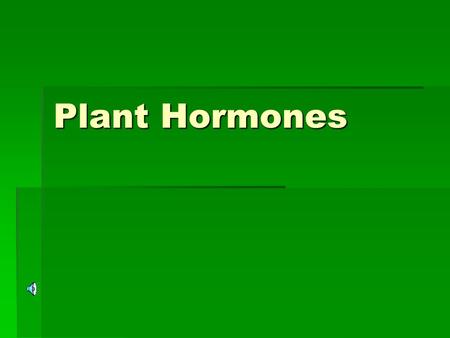