Presentation on theme: "PAYDAY!!! You are a hard working colonist in one of the 13 original colonies. The amount of candy you receive equals the amount of money you made that."— Presentation transcript:

3 TAX #2 By order of Queen Coach Wilkerson, any colonist wearing khaki pants, shorts, or skirt must pay a tax of $1.00 to the governor.

4 TAX #3 By order of Queen Coach Wilkerson, all colonists wearing running shoes must pay a tax of $2.00 to the governor.

5 TAX #4 By order of Queen Coach Wilkerson, all male colonist must pay a tax of $1.00 to the governor.

6 THAT’S NOT FAIR!!!!!! Were the colonist able to have any representation or opinion for what Queen Coach Wilkerson would be taxed and how much? Who ended up with the most money/candy? Was this fair or unfair?

8 Acts of the Revolution Vocabulary Boycott:Boycott: Form of protest by refusing to buy products or services. Repeal:Repeal: To take back, do away with, end Monopoly:Monopoly: A commodity (item) controlled by one company. Acts:Acts: Laws Duty Tax:Duty Tax: A Tax on items / services Smuggle:Smuggle: To hide or bring something in the country illegally.

9 Acts of the American Revolution

10 Main Causes of the American Revolution 1.Mercantilism 2.Proclamation Line of 1763 3.“No Taxation Without Representation” 4.The Sugar Act 5.The Stamp Act 6. The Quartering Act 7. The Townshend Act 8. The Tea Act 9. The Intolerable Acts 10. The Boston Tea Party 11. The Boston Massacre

12 Remember Mercantilism???? Mercantilism SUCKS!!!!! The British Parliament followed the economic policy of mercantilism. Mercantilism is the economic system in which colonies are forced to provide natural resources and income to their “parent” country. The British Parliament expected colonists to sell cash crops like cotton & tobacco and other natural resources to England to be manufactured. In exchange, the colonists were expected to buy the expensive manufactured goods. This would bring more money back to England and not the colonies. The colonist wanted Free Enterprise, and they thought Mercantilism SUCKS!!!!

13 Proclamation Line of 1763 To prevent Native American attacks on colonists, King George III & Parliament passed the Proclamation Line of 1763 law. King George III claimed he couldn’t pay soldiers to protect colonists if they moved west past the Appalachian Mountains. Colonist were upset because many male colonists fought and died in the French & Indian War for the right to settle in the Ohio River Valley.

14 “No Taxation Without Representation” Parliament taxed colonists without permission to pay the cost of the French & Indian War. Colonists believed as citizens of England, their permission was needed before new taxes were passed. Colonists believed they were not being represented in Parliament. “No Taxation Without Representation!” became a popular slogan for protesting American colonists.

19 Samuel Adams Leader of the patriot group the “Sons of Liberty”. Helped organize the “Boston Tea Party” and several protests and boycotts. Organized the “Committees of Correspondence”, a group that spread news throughout the colonies.

25 Boston Tea Party, 1773 The Sons of Liberty disguised as Native Americans boarded 3 ships in Boston Harbor. Led by Samuel Adams, the patriot group dumped all British tea overboard in protest of the Tea Act. As a result, King George III decided to punish the colonist.

27 Lexington and Concord, 1775 The King sent an army to capture military supplies in Concord 1 st shots of the Revolution The colonists will soon declare INDEPENDENCE

Download ppt "PAYDAY!!! You are a hard working colonist in one of the 13 original colonies. The amount of candy you receive equals the amount of money you made that." 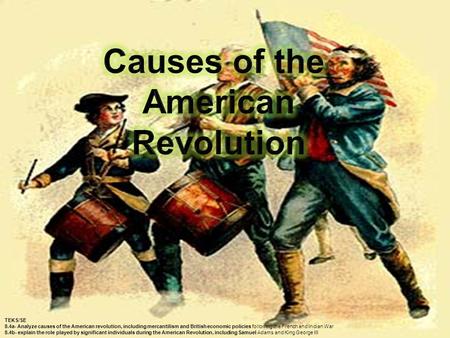