2 Asst. Prof. Dr. Alexander Bürgin IUE2 The treaties distinguish different types of legislation (1) Regulations: Binding in its entirety, directly applicable in all MS (no need for national implementation measures) Directives: result is binding, but leave national authorities the choice of form and methods

3 Asst. Prof. Dr. Alexander Bürgin IUE3 The treaties distinguish different types of legislation (2) Decision: binding in its entirety, addressed to any or all MS, undertakings or individuals, rather administrative than legislative acts Recommendations and Opinions: no binding force, do not formally constitute part of EU law

8 8 The ECJ cannot initiate actions Cases must be referred to the Courts by the Commission, National Courts, Member States or any natural or legal person (depend on type of case) Because of the constantly expanding workload the Court of First instance was established 1988, charged with matters that are more routine in nature 500 cases a year

9 Asst. Prof. Dr. Alexander Bürgin IUE9 Types of Cases: 1) Failure to fulfill an obligation Rules on whether MS have failed to fulfill obligations under the treaty Action may be brought either by Com or a MS Constitute largest number of cases (219 in 2004) Court can impose penalties on MS – ex: France for allowing fisherman to catch/sell fish that were smaller than permitted under EU legislation

10 Asst. Prof. Dr. Alexander Bürgin IUE10 2.) Application for annulment Review of the legality of acts adopted by EP, Council and Commission (lack of competence, infringemenent of procedural requirements Action may be brought by MS, Council, Commission, EP or in some areas natural or legal persons Examples: –Dilution of the Stability Pact by the Council avoiding deficit procedures against France and Germany in 2003 –Commission vetoed a merger between two firms with the argument the merger would harm competition

12 Asst. Prof. Dr. Alexander Bürgin IUE12 4. Failure to act The Treaty requires the European Parliament, the Council and the Commission to make certain decisions under certain circumstances. If they fail to do so, the member states, the other Community institutions and (under certain conditions) individuals or companies can lodge a complaint with the Court so as to have this failure to act officially recorded.

14 Asst. Prof. Dr. Alexander Bürgin IUE14 The independent influence of the court should not be overstated Despite the ECJ sometimes not only interpret law but makes law his influence is limited –Judgments constrained by policy framework –Cannot initiate cases itself 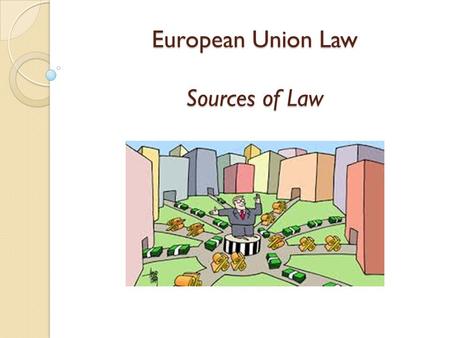