Elvis Presley By: Hailey Mandelko. Birth Elvis Aaron Presley was born on January 8. 1935 He was born in his home in east Tupelo.

Presentation on theme: "Elvis Presley By: Hailey Mandelko. Birth Elvis Aaron Presley was born on January 8. 1935 He was born in his home in east Tupelo."— Presentation transcript:

2 Birth Elvis Aaron Presley was born on January 8. 1935 He was born in his home in east Tupelo.

3 Family He is an only child because his twin was born a still born His mother is Gladys and his father Vernon Elvis became very close to his mom when his father was in prison. They moved to Memphis at a young age.

4 Childhood Elvis did not have many friends when he was younger. He was bullied sometimes at school so he became friends with his mother. Some say their relationship was unusual.

5 Beginning of Singing He first started singing when he went to church as a child. He then went to contests and fairs. He even sang at his school in the choir.

6 Working As a teenager, Elvis had to work in order for him and his family to make it through. He went from ushering a theatre to driving a truck for an electric company.

7 First Recording His first recording was actually a gift for his mother for her birthday. When he was recording the lady that was helping him actually took notes on him and remembered him.

8 RCA RCA was the record company that offered him a one year contract. When the contract was final, Elvis was only 20 so his father had to sign.

9 Debut Album His debut album was released March 23, 1956. The album was called Elvis Presley It was RCA’s first million dollar record and hit the top seller for 10 weeks

11 Military Elvis was drafted into the Army in 1957, but was in the middle of shooting a movie so he was given a deferment to finish the movie He was drafted March 24, 1958 and finish his training in Texas before being moved to Germany. He was introduced to meth while he was there.

12 Acting Career He started a acting career before he went to the war, but continued it when he returned. He started with small roles like coming in for scenes all the way to being the main star in movies.

13 Marriage Elvis met Priscilla in 1959 in Germany when she was 14 and he was 24. She finally convinced her parents to let her live in America and when she did it was not long till her and Elvis got married on May, 1 1967. They had one child named Lisa Marie who was born on February 1, 1968

14 Comeback Elvis was becoming unhappy with his carrer when his music was not getting the ratings that he wanted. He began singing a new album that made the fans fall in love with him all over again. His sex appeal was what all the fans wanted along with his dance moves

15 Divorce Being on the road so much caused problems with his marriage. Their was controversy on whether or not they had an affair with other people during the marriage. Their divorce was final on October 9, 1973 They decided to share custody of their daughter who was 10.

16 Death He was found dead on his suite floor on August 16, 1977. There is a lot of controversy on how he died. It is known that he had many chronic illnesses but also that he was taking a lot of prescribed pills that doctors had given him.

18 Legacy People had started to forget about Elvis before he died. When he died people realized that he was a huge part of their lives. He influenced the music we listen to know. He is the idol for many singers that sing to us like Michael Jackson who has shaped pop.

Download ppt "Elvis Presley By: Hailey Mandelko. Birth Elvis Aaron Presley was born on January 8. 1935 He was born in his home in east Tupelo." 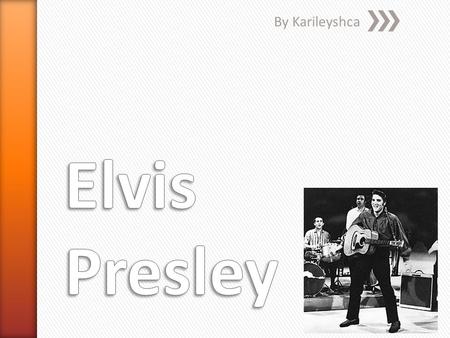 By Karileyshca. Elvis Presley was born January in Tupelo Mississippi Elvis got married with Priscilla and had a baby named Lisa Presley Elvis also.