Presentation on theme: "“Everything is beautiful. Pop is everything.” --- Andy Warhol"— Presentation transcript:

5 Pop Art - Andy Warhol Warhol liked to paint ordinary things, too.
He used a silkscreen technique to make multiple copies of the same image. Then he would make that same image different each time by using different colors. What do you think of these silkscreen paintings? Andy Warhol Flowers (1970)

8 Pop Art – Roy Lichtenstein
Roy Lichtenstein As I Opened Fire (1964) Roy Lichtenstein was an American artist originally from New York. He was influenced by jazz music, cartoons, and comic book art. The paintings above, which are large (approx. 5.6 x 4.6 feet each), are displayed together like a comic strip. Is the artist telling a story here?

13 Pop Art – Wayne Thiebaud
Wayne Thiebaud is another American artist who is associated with Pop art, although his art started a little before the Pop art movement. Thiebaud liked to use heavy pigment and exaggerated colors for his subjects. The colors and shadowing he uses are similar to cartoons and advertisements. What colors does the artist use for shading and shadows here? Wayne Thiebaud Girl with Ice Cream Cone 1963

14 Pop Art – Wayne Thiebaud
Wayne Thiebaud Pies, Pies, Pies (1961) Wayne Thiebaud Cakes (1963) Thiebaud is best known for his paintings of objects found in diners and cafeterias, such as pies and pastries. Where do you see shadows in these paintings? What different colors did he use to paint the shadows?

15 Pop Art – Wayne Thiebaud
Thiebaud Three Machines (1963) This is probably Thiebaud’s most famous painting. How does it make you feel?

17 Pop Art – Claes Oldenburg
Not all Pop art was painting or two-dimensional (flat)! Claes Oldenburg, an artist from Sweden, created all kinds of sculptures from all kinds of materials. At first, art critics and other people ridiculed (made fun of) Oldenburg for his art, but now most people see it as whimsical and fun. What do you think? Claes Oldenburg Toilet (Hard Model) (1966) Varnish and felt-pen on corrugated cardboard and wooden construction [111.8 x 71.7 x 83.8 cm] Claes Oldenburg Soft Toilet (1966) Vinyl filled with kapok, painted with liquite and wood [ x x 76.2 cm]

20 Art Response Fold a sheet of paper in half and then in half again so that you have 4 sections. Can you think of an every day object (something simple) and draw 4 different versions of it using pop art colors? Try it Andy Warhol Style! Draw a picture of your favorite dessert or candy. If you could do a big crazy sculpture of something somewhere, what would it be? Where would you put it? Draw a picture of your idea. Robert Indiana

Download ppt "“Everything is beautiful. Pop is everything.” --- Andy Warhol" 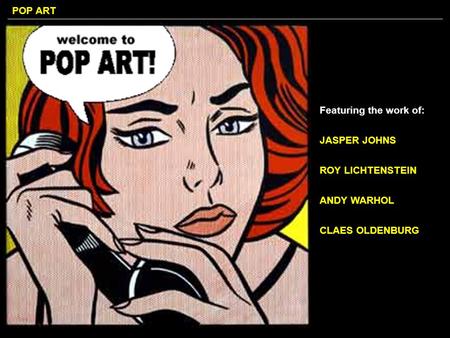