2 Multiplier Effect of Increasing Government Purchases
Government spending is an autonomous increase in aggregate spending This additional initial spending will start a chain reaction throughout the economy This initial spending multiplied by the multiplier gives us the final change in real GDP Ex 1: If the MPC is 0.5, the multiplier is __. Given a multiplier of 2, a $50 billion increase in government purchases of goods and services would increase real GDP by __________. Of that $100 billion, $50 billion is the initial effect from the increase in G, and the remaining $50 billion is the subsequent effect of more production leading to more income which leads to more consumer spending, which leads to more production, and so on. 2 M = 1/(1-0.5) = 2 $100 billion The firms producing the goods and services purchased by the government will earn revenues that flow to households in the form of wages, profit, interest, and rent. This increase in disposable income will lead to an increase in consumer spending. Remember, you’ve already learned about the spending multiplier. The multiplier is the ration of change in real GDP caused by an autonomous change in aggregate spending to the size of that autonomous change. If C or I increased by $1, eventually that would multiply into more dollars of spending and income and real GDP. The size of the multiplier depends on the marginal propensity to consume or MPC. Recall that the marginal propensity to consume, the fraction of an additional dollar in disposable income that is spent. Spending multiplier= 1/(1-MPC) An injection of government spending (G) works in the same way.

3 G Multiplier Ex 2: Suppose the US is experiences a recessionary gap. Current output is $500 billion below potential GDP and unemployment is beginning to rise. Does the government need to inject $500 of new G into the economy to return to full employment? If MPC=0.9, what is the government spending multiplier? M = 1/.10 = 10 So an increase of G = $50 billion will eventually multiply to a 10=$50 billion = $500 billion positive shift of AD to the right. NO

4 G Multiplier Ex 2: Suppose the US is experiences an inflationary gap. Current output is $800 billion above potential GDP and inflation is starting to hurt the economy. If MPC=0.75, what is the government spending multiplier? M = 1/.25 = 4 So a decrease of G=$200 billion will eventually multiply to a 4=$200 billion = $800 billion negative shift of AD to the left.

5 Multiplier Effect of Changes in Government Transfers & Taxes
Government can indirectly affect AD through taxes and transfers. The impact of tax/transfer policy indirectly affects real GDP because this type of policy first affects consumer disposable income (Yd) Consumers will save some of every new dollar of Yd If dollars of new Yd are saved, they cannot multiply into additional spending and income Governments don’t always need to directly spend money to enact fiscal policy. Governments can also change transfer payments or taxes. However, a change in government transfers or taxes shifts the AD curve by LESS than an equal-size change in government purchases, resulting in a smaller effect on real GDP. For example, imagine that instead of spending $50 billion on bridges, the government simply hands out $50 billion in the form of government transfers. In this case, there is no direct effect on AD as there was with government purchases.

8 Taxes and the Multiplier
Taxes capture part of the increase in real GDP As a result of tax structure, government revenue increases when real GDP does Effects of these automatic increases in tax revenue reduce the size of the multiplier We can generalize that the tax multiplier (Tm) is less than the spending multiplier (M) Tm = - MPC/(1-MPC) The great majority of revenue is raised via taxes that depend positively on the level of real GDP. Taxes that depend positively on real GDP reduce the size of the multiplier. This isn’t on purpose, per say, but it is a consequence of the way the tax laws are written, which causes most sources of government revenue to increase automatically when real GDP goes up. For Example, income tax receipts increase when real GDP rises because the amount each individual owes in taxes depends positively on his or her income, and household’s taxable income rises when real GDP rises. (Sales taxes and corporate profit taxes also increase when this happens) Remember, the multiplier is the result of a chain reaction in which higher real GDP leads to higher disposable income, which leads to higher consumer spending, which leads to further increases in real GDP. Because the government takes a peice of any increase in real GDP means that this increase in consumer spending is smaller than it would be if taxes weren’t part of the picture.

9 Types of Government Stabilizers
Automatic stabilizers: government spending and taxation rules that cause fiscal policy to be automatically expansionary when the economy contracts and automatically contractionary when the economy expands, without requiring any deliberate action by policy makers This is also called “non-discretionary” fiscal policy The progressive tax system is a form of an automatic stabilizer Some government transfers are also automatic stabilizers Discretionary fiscal policies: active stabilization policies Results in deliberate action by policy makers rather than rules Because of problems with time lags, discressionary fiscal policy is used only in special circumstances, such as a severe recession Many economists argue that it’s a good thing this is the case. Because most recessions are caused by a negative demand shock, the same mechanism that causes tax revenue to increase when the economy expands causes it to decrease when the economy contracts. Since tax receipts decrease when real GDP falls, the effect of these negative demand shocks are smaller than they would be if there were no taxes. The decrease in tax revenue reduces the adverse effect of the initial fall in aggregate demand. (Acts like an automatic expansionary policy!) Ex. Assume the economy is in recession and the government has increased G to boost employment and real GDP. As some consumers find jobs and increase income, they start paying more taxes and disposable income falls. As Yd falls, it slows down the multiplier process. This may avoid a situation where the big shift in AD creates inflation.

11 Extra Practice 2. Current real GDP is $6 trillion and potential GDP is $7.5 trillion. The government is prepared to pass a spending package to return the economy to full employment. What kind of spending package should be passed and how big does it need to be? Assume the MPC = 0.9 Answer: The economy is in a recession so spending must be increased with expansionary fiscal policy. The spending multiplier M = 1/(1-.9) = 10. To increase real GDP by $1.5 trillion, government spending needs to be increased by $1.5 trillion/10 = $1.5 trillion or 150 billion 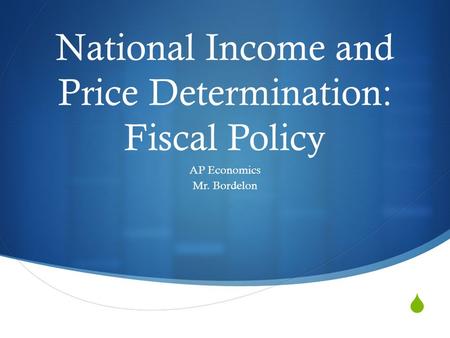 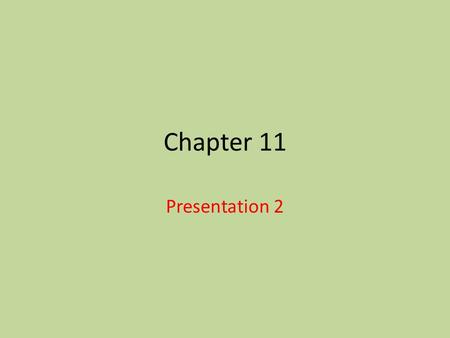 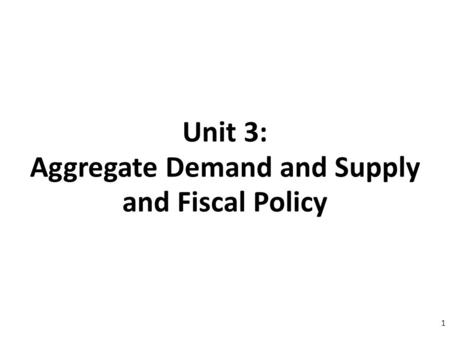 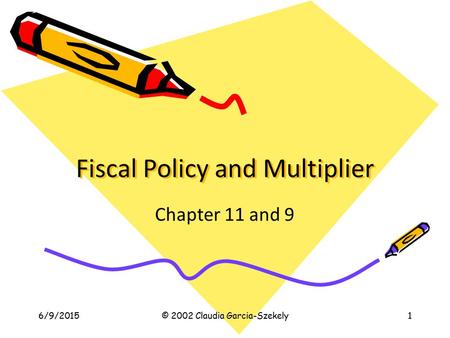 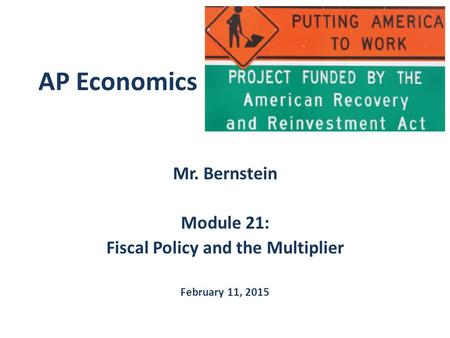 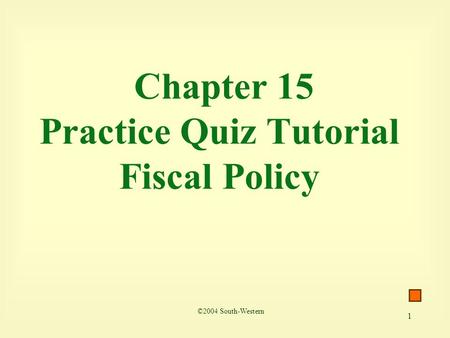 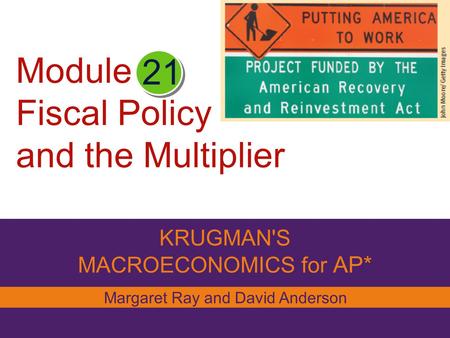 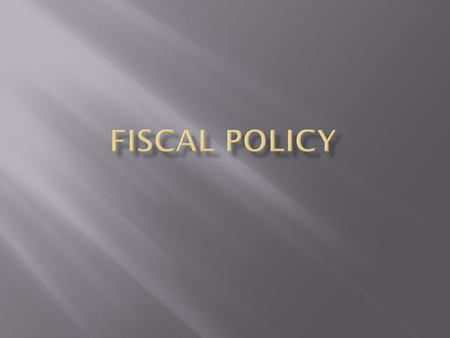 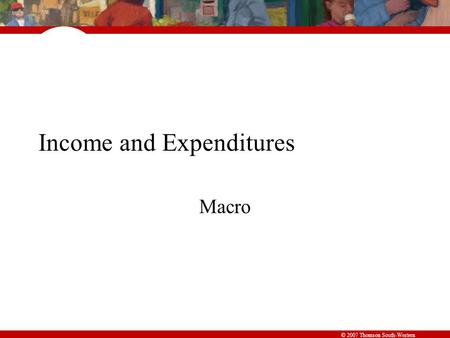 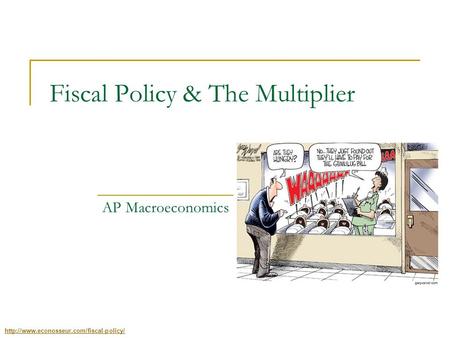 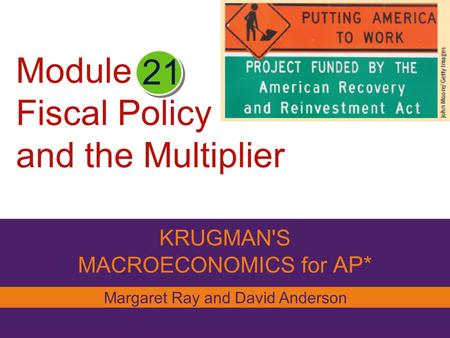