1 Ch. 4 Phonetics: The Sounds of Language
An Introduction to Language (9e, 2009) by Victoria Fromkin, Robert Rodman and Nina Hyams

3 Identity of Speech Sounds
Our linguistic knowledge allows us to ignore nonlinguistic differences in speech (such as individual pitch levels, rates of speed, coughs) We are capable of making sounds that are not speech sounds in English but are in other languages The click tsk that signals disapproval in English is a speech sound in languages such as Xhosa and Zulu where it is combined with other sounds just like t or k is in English

5 The Phonetic Alphabet Spelling, or orthography, does not consistently represent the sounds of language Some problems with ordinary spelling: 1. The same sound may be represented by many letters or combination of letters: he people key believe seize machine Caesar seas see amoeba 2. The same letter may represent a variety of sounds: father village badly made many

7 The Phonetic Alphabet 4. Some letters in a word may not be pronounced at all autumn sword resign pterodactyl lamb corps psychology write knot 5. There may be no letter to represent a sound that occurs in a word cute use

9 The Phonetic Alphabet Dialectal and individual differences affect pronunciation, but the sounds of English are:

10 The Phonetic Alphabet Using IPA symbols, we can now represent the pronunciation of words unambiguously:

14 Consonants: Place of Articulation
Bilabials: [p] [b] [m] Produced by bringing both lips together Labiodentals: [f] [v] Produced by touching the bottom lip to the upper teeth Interdentals [θ] [] Produced by putting the tip of the tongue between the teeth

19 Consonants: Manner of Articulation
Oral sounds are those produced with the velum raised to prevent air from escaping out the nose Nasal sounds are those produced with the velum lowered to allow air to escape out the nose So far we have three ways of classifying sounds based on phonetic features: by voicing, by place of articulation, and by nasalization [p] is a voiceless, bilabial, oral sound [n] is a voiced, alveolar, nasal sound

20 Consonants: Manner of Articulation
Stops: [p] [b] [m] [t] [d] [n] [k] [g] [] [Ɂ] Produced by completely stopping the air flow in the oral cavity for a fraction of a second All other sounds are continuants, meaning that the airflow is continuous through the oral cavity Fricatives: [f] [v] [θ] [] [s] [z] [] [] [] [] [h] Produced by severely obstructing the airflow so as to cause friction

22 Consonants: Manner of Articulation
Approximants: [w] [j] [r] [l] Sometimes liquids and glides are put together into one category because the articulators approximate a frictional closeness but do not actually cause friction Trills and flaps: [r]* [] [] Trills are produced by rapidly vibrating an articulator Flaps are produced by a flick of the tongue against the alveolar ridge Clicks: Produced by moving air in the mouth between various articulators The disapproving sound tsk in English is a consonant in Zulu and some other southern African languages The lateral click used to encourage a horse in English is a consonant in Xhosa *The textbook uses [r] to represent the central liquid as in the word ready rather than as a trill

27 Vowels Round vowels: [u] [] [o] [] Diphthongs: [aɪ] [a] [ɪ]
Produced by rounding the lips English has only back round vowels, but other languages such as French and Swedish have front round vowels Diphthongs: [aɪ] [a] [ɪ] A sequence of two vowel sounds (as opposed to the monophthongs we have looked at so far) Nasalization: Vowels can also be pronounced with a lowered velum, allowing air to pass through the nose In English, speakers nasalize vowels before a nasal sound, such as in the words beam, bean, and bingo The nasalization is represented by a diacritic, an extra mark placed with the symbol:

32 Major Phonetic Classes
Consonantal categories cont.: Anteriors: [p] [b] [m] [f] [v] [] [] [t] [d] [n] [s] [z] Produced in the front part of the mouth (from the alveolar area forward) Sibilants: [s] [z] [] [] [t] [d] Produced with a lot of friction that causes a hissing sound, which is a mixture of high-frequency sounds Syllabic Sounds: sounds that can function as the core of a syllable Vowels, liquids, and nasals

33 Prosodic Features Prosodic, or suprasegmental features of sounds, such as length, stress and pitch, are features above the segmental values such as place and manner of articulation Length: in some languages, such as Japanese, the length of a consonant or a vowel can change the meaning of a word: biru [biru] “building” biiru [biru] “beer” saki [saki] “ahead” sakki [saki] “before”

34 Prosodic Features Stress: stressed syllables are louder, slightly higher in pitch, and somewhat longer than unstressed syllables The noun digest has the stress on the first syllable The verb digest has the stress on the second syllable English is a stress-timed language, meaning that at least one syllable is stressed in an English word French functions differently, so when English speakers learn French they put stress on certain syllables which contributes to their foreign accent

35 Tone and Intonation Tone languages are languages that use pitch to contrast the meaning of words For example, in Thai, the string of sounds [na] can be said with 5 different pitches and can thus have 5 different meanings:

37 Phonetic Symbols and Spelling Correspondences
The textbook describes the phonetic system of a compromise among several varieties of American English, which may differ from your own The purpose is to teach phonetics in general and demonstrate how the science of phonetics can describe the speech sounds of all the world’s languages

38 Phonetics of Signed Languages
Signs can be broken down into segmental features similar to the phonetic features of speech sounds (such as place and manner of articulation) And just like spoken languages, signed languages of the world vary in these features Signs are formed by three major features: 1. The configuration of the hand (handshape) 2. The movement of the hand and arm towards or away from the body 3. The location of the hand in signing space

39 Phonetics of Signed Languages
1. The configuration of the hand (handshape)

40 Phonetics of Signed Languages
2. The movement of the hand and arm

41 Phonetics of Signed Languages
3. The location of the hand in signing space 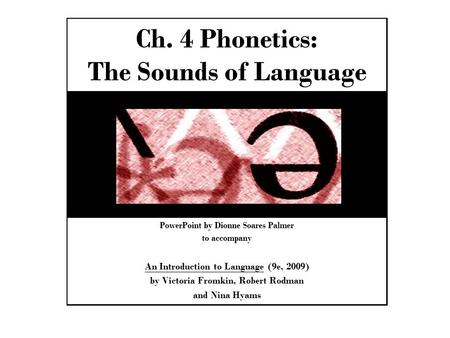 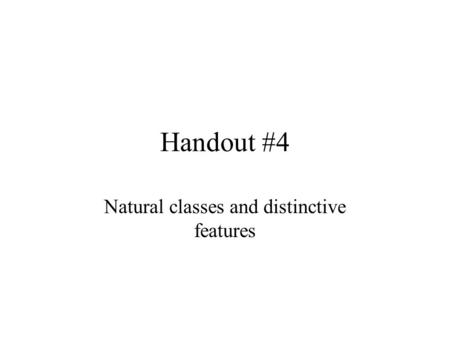