2 Millions of immigrants entered the U.S. in the late 19 th and early 20 th centuries Causes Famine Land shortages Religious and political persecution Some were “birds of passage,” intending to immigrate only temporarily to earn money and return home Immigration today reflects many of the same causes… Sudan (Darfur) Middle East Africa Mexico Europe

4 Arrived at Angel Island (San Francisco) 1851-1883 Approximately 300,000 immigrants Gold Rush of 1849 ---Chinese came to make their fortunes Helped build the transcontinental railroad-connected the east and west After completion of the railroad most turned to farming, mining, and domestic services 1884 Approximately 200,000 immigrants Hawaiian planters were allowed to recruit Japanese workers United States annexation of Hawaii in 1898 led to an increased number of Japanese immigrants to America

5 1880-1920 Approximately 260,000 immigrants Arrived in eastern and southeast U.S. Jamaica, Cuba, Puerto Rico, and other islands Came to the U.S. because jobs were scarce and the U.S. was in the middle of an industrial boom Early 1900s 700,000 immigrants (7% Mexico’s entire population) Mexicans arrived to work on newly created farmland and political/social upheavals in Mexico

6 Faced many adjustments to culture Trip from Europe took 1 week Trip from Asia took nearly 3 weeks Many traveled in steerage, the cheapest accommodations Crammed into small areas with many other travelers Rarely allowed on deck Louse-infested beds Shared toilets with many others Disease spread quickly and many died

7 1. Find a place to live 2. Get a job 3. Get along in daily life without understanding the language and culture 4. Search out those who shared common culture, religion, language and values 5. Pool money with those people and build churches or synagogues and create social clubs 6. Publish newspaper in native language 7. Deal with hatred and prejudice from natives

8 Many natives (born in America) viewed the country as a melting pot, where the old language and customs are abandoned to blend with American culture new immigrants did not wish to abandon their native customs, enraging the natives Nativism-overt favoritism toward American-born citizens 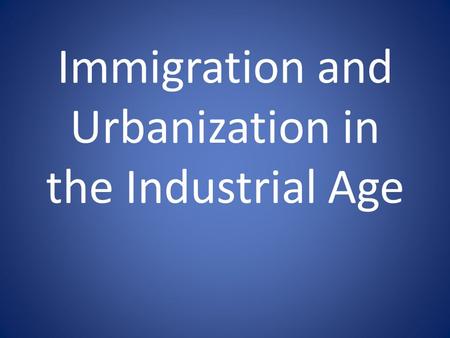