INTRODUCTION TO NONSTATISTICAL SAMPLING FOR AUDITORS

2 SITUATION You are auditing the Dept. of Admissions & Records for Micronesia College. One of your objectives is to verify that student records are being updated correctly and timely. You decide to select a sample of grades posted from the most recent semester completed. APIPA 2010

3 SITUATION What would you normally document about this sample?
Sample size Selection method Population Procedures to be performed Purpose of test What kind of test is this? APIPA 2010

6 AUDIT SAMPLING Application of an audit procedure to less than 100% of the items in a population Account balance Class of transactions Examination “on a test basis” Key: Sample is intended to be representative of the population. Objective: To reach a conclusion about the population based on the sample items tested. APIPA 2010

9 TYPE II – RISK OF INCORRECT ACCEPTANCE
Internal control: Risk that sample supports conclusion that control is operating effectively when it really isn’t AKA – Risk of overreliance, risk of assessing control risk too low Substantive testing: Risk that sample supports conclusion that balance is properly stated when it really isn’t APIPA 2010

16 WHEN IS SAMPLING INAPPROPRIATE?
Selection of all items with a particular characteristic, e.g., all disbursements > $100,000 Testing only one or a few items, e.g., automated IT controls, walk throughs Analytical procedures Scanning Inquiry Observation APIPA 2010

25 STEP 1: DETERMINE THE TEST OBJECTIVES
Objective for T of C: To determine the operating effectiveness of the internal control Support control risk assessment below maximum (FS audit) Identify controls to be tested and understand why they are to be tested APIPA 2010

38 HAPHAZARD SELECTION Selection by auditor without any conscious bias
If you select large, risky, or unusual items, it is NOT haphazard selection and it is NOT audit sampling. Instead – targeted or directed selection Still desire representative sample Avoid unusual, large, first or last Useful for certain situations Example: Tracing credits from AR to CR/other sources looking for fictitious credits Less costly and simpler APIPA 2010

40 STEP 5: PERFORM THE AUDITING PROCEDURES
Deviations observed Investigate nature, cause, and consequence of every exception Unintentional error? Or fraud? Monetary misstatement resulted? Cause – misunderstanding of instructions? Carelessness? Effect on other areas? APIPA 2010

43 COMPLIANCE AUDITING Performance of auditing procedures to determine whether an entity is complying with specific requirements of laws, regulations, or agreements Governmental entities and other recipients of governmental financial assistance Compliance with laws and regulations that materially affect each major federal assistance program APIPA 2010

44 COMPLIANCE AUDITING OF FEDERAL ASSISTANCE PROGRAMS
Definition of population for testing of an internal control procedure that applies to more than one program Define items from each major program as a separate population, OR Define all items to which control is applicable as a single population Second choice usually more efficient APIPA 2010

48 ASSERTIONS FOR CLASSES OF TRANSACTIONS
Occurrence: Transaction actually occurred and pertains to the entity (existence/validity) Completeness: All transactions have been recorded Accuracy: Amounts and other data have been recorded correctly APIPA 2010

53 STEP 2: DEFINE THE POPULATION CHARACTERISTICS
Identify individually significant items Some items too risky, must be audited, OR Easier to pull out and test large items Stratify population Divide population into homogeneous units For example, all items > $10,000 Items tested 100% are not part of the sample APIPA 2010

55 STEP 2: DEFINE THE POPULATION CHARACTERISTICS
Define the sampling unit Any item in the defined population Could be an account or a transaction APIPA 2010

56 STEP 3: DETERMINE THE SAMPLE SIZE
Subjective determination OK Factors to consider: Amounts of individual items Accounting populations usually include a few very large items, a number of moderately large amounts, and a large number of small amounts If not stratified, will need larger sample Variability and size of population The greater the variability, the larger the sample size needed Population size – little effect on sample size so usually ignored APIPA 2010

59 STEP 5: PERFORM THE AUDITING PROCEDURES
Deviations observed Investigate nature, cause, and consequence of every exception Unintentional error? Or fraud? Monetary misstatement resulted? Cause – misunderstanding? Carelessness? Effect on other areas? APIPA 2010 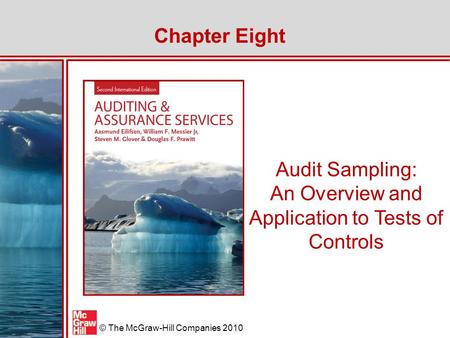 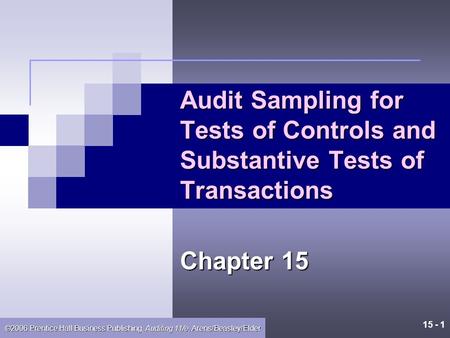 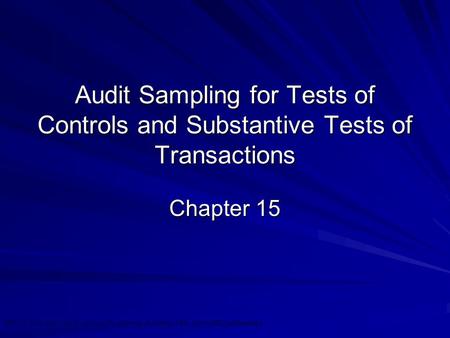 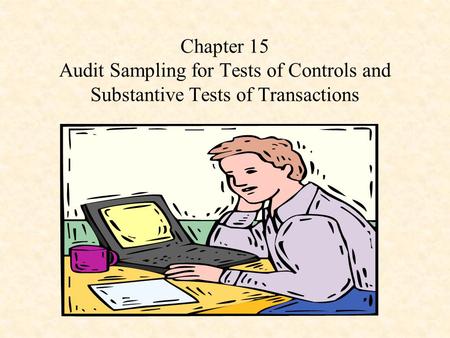 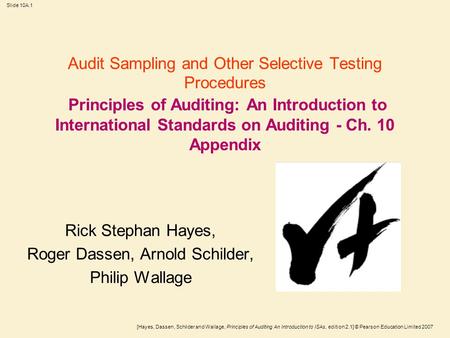 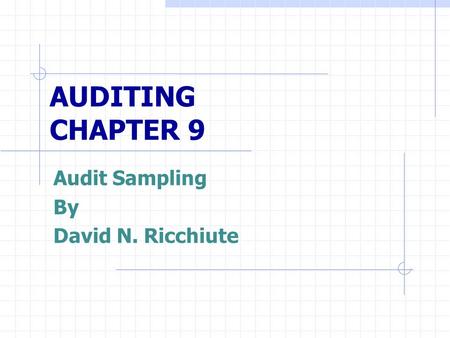 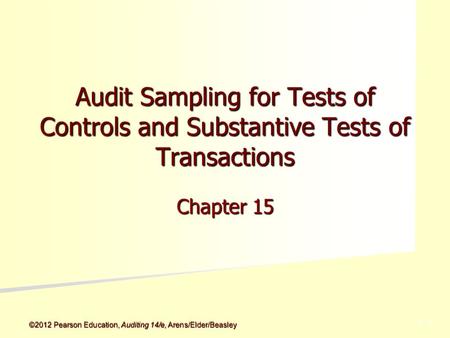 Audit Sampling for Tests of Controls and Substantive Tests of Transactions Chapter 15. 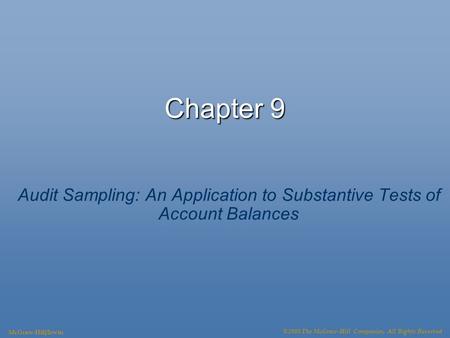 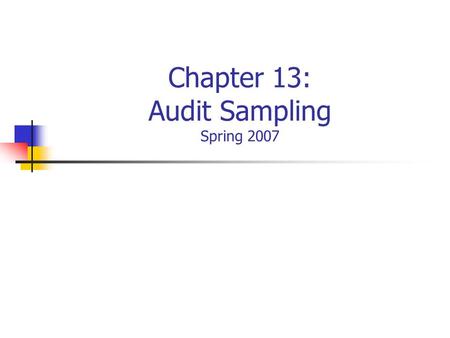 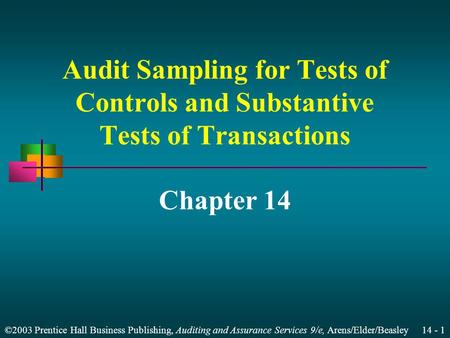 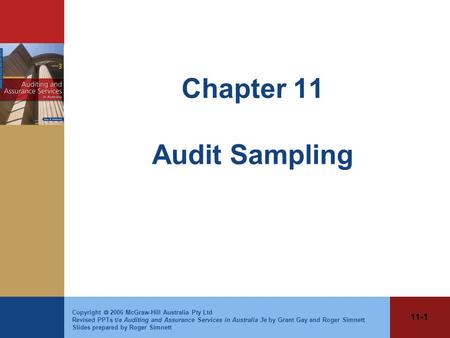 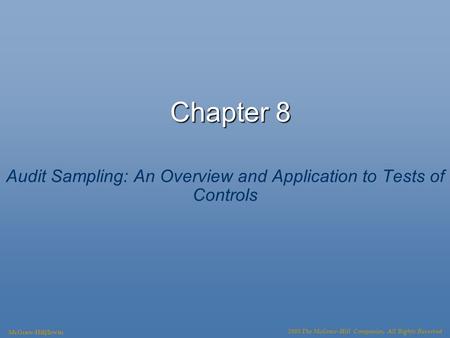 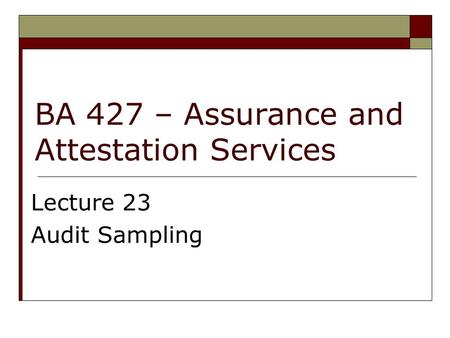 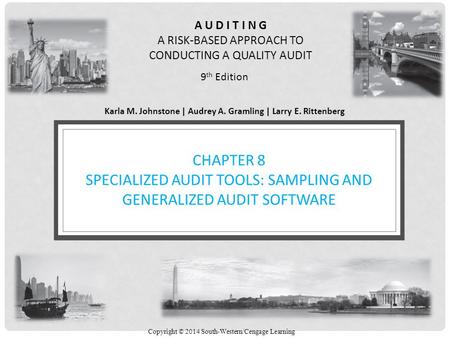 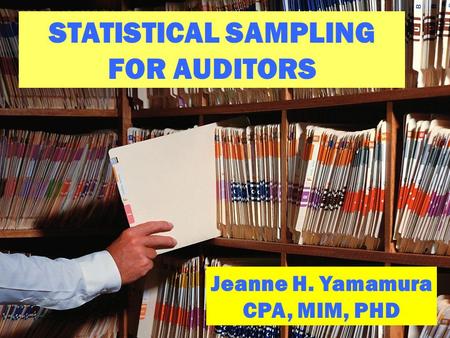 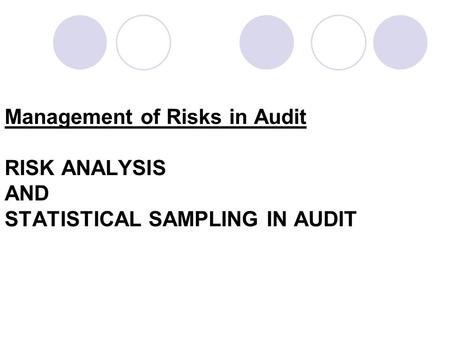 Management of Risks in Audit RISK ANALYSIS AND STATISTICAL SAMPLING IN AUDIT. 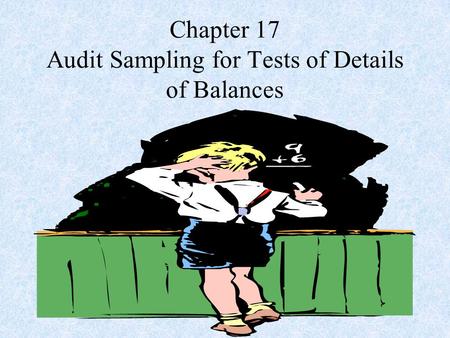 Chapter 17 Audit Sampling for Tests of Details of Balances. 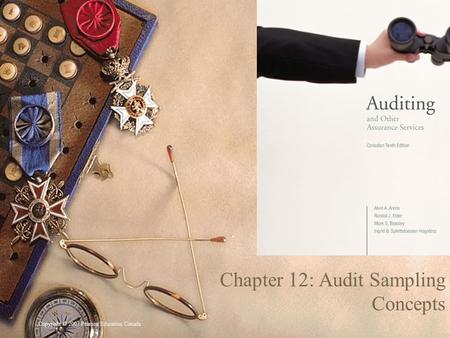 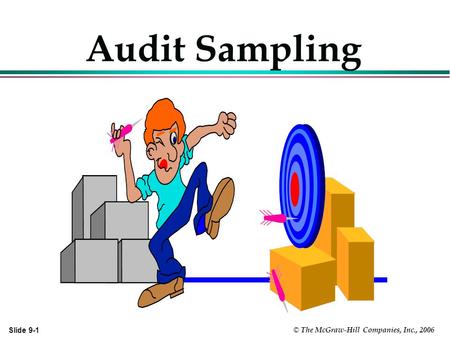 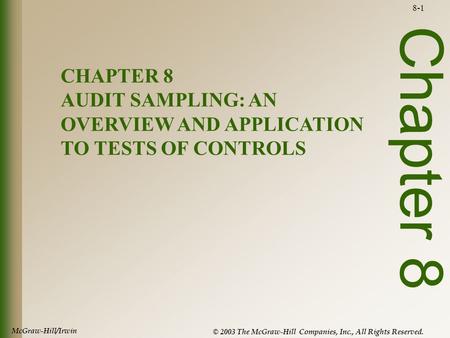