2 Inferential Methods for Parameters Parameter: Numeric Description of a Population Statistic: Numeric Description of a Sample Statistical Inference: Use of observed statistics to make statements regarding parameters –Estimation: Predicting the unknown parameter based on sample data. Can be either a single number (point estimate) or a range (interval estimate) –Testing: Using sample data to see whether we can rule out specific values of an unknown parameter with a certain level of confidence

3 Estimating with Confidence Goal: Estimate a population mean based on sample mean Unknown: Parameter (  ) Known: Approximate Sampling Distribution of Statistic Recall: For a random variable that is normally distributed, the probability that it will fall within 2 standard deviations of mean is approximately 0.95

4 Estimating with Confidence Although the parameter is unknown, it’s highly likely that our sample mean (estimate) will lie within 2 standard deviations (aka standard errors) of the population mean (parameter) Margin of Error: Measure of the upper bound in sampling error with a fixed level (we will typically use 95%) of confidence. That will correspond to 2 standard errors:

5 Confidence Interval for a Mean  Confidence Coefficient (1  Probability (based on repeated samples and construction of intervals) that a confidence interval will contain the true mean  Common choices of 1-  and resulting intervals:

11 Precautions Data should be simple random sample from population (or at least can be treated as independent observations) More complex sampling designs have adjustments made to formulas (see Texts such as Elementary Survey Sampling by Scheaffer, Mendenhall, Ott) Biased sampling designs give meaningless results Small sample sizes from nonnormal distributions will have coverage probabilities (1  ) typically below the nominal level Typically  is unknown. Replacing it with the sample standard deviation s works as a good approximation in large samples

12 Selecting the Sample Size Before collecting sample data, usually have a goal for how large the margin of error should be to have useful estimate of unknown parameter (particularly when comparing two populations) Let E be the desired level of the margin of error and  be the standard deviation of the population of measurements (typically will be unknown and must be estimated based on previous research or pilot study) The sample size giving this margin of error is:

14 Elements of a Hypothesis Test (I) Null hypothesis (H 0 ): Statement or theory being tested. Stated in terms of parameter(s) and contains an equality. Test is set up under the assumption of its truth. Alternative Hypothesis (H a ): Statement contradicting H 0. Stated in terms of parameter(s) and contains an inequality. Will only be accepted if strong evidence refutes H 0 based on sample data. May be 1-sided or 2-sided, depending on theory being tested. Test Statistic (T.S.): Quantity measuring discrepancy between sample statistic (estimate) and parameter value under H 0 Rejection Region (R.R.): Values of test statistic for which we reject H 0 in favor of H a P-value: Probability (assuming H 0 true) that we would observe sample data (test statistic) this extreme or more extreme in favor of the alternative hypothesis (H a )

18 Test Statistic Parameter: Population mean (  ) under H 0 is  0 Statistic (Estimator): Sample mean obtained from sample measurements is Standard Error of Estimator: Sampling Distribution of Estimator: –Normal if shape of distribution of individual measurements is normal –Approximately normal regardless of shape for large samples Test Statistic: (labeled simply as z in text) Note: Typically  is unknown and is replaced by s in large samples

20 Computing the P-Value 2-sided Tests: How likely is it to observe a sample mean as far of farther from the value of the parameter under the null hypothesis? (H 0 :  0 H a :  0 ) After obtaining the sample data, compute the mean and convert it to a z-score (z obs ) and find the area above |z obs | and below -|z obs | from the standard normal (z) table 1-sided Tests: Obtain the area above z obs for upper tail tests (H a :  0 ) or below z obs for lower tail tests (H a :  0 )

25 Power of a Test Now suppose in reality that  = 3.0 (H A is true) Power now refers to the probability we (correctly) reject the null hypothesis. Note that the sampling distribution of the sample mean is approximately normal, with mean 3.0 and standard deviation (standard error) 2.0. Decision Rule (from last slide): Conclude population mean interference effect is positive (greater than 0) if the sample mean difference score is above 3.29 Power for this case can be computed as:

31 Potential for Abuse of Tests Should choose a significance (  ) level in advance and report test conclusion (significant/nonsignificant) as well as the P-value. Significance level of 0.05 is widely used in the academic literature Very large sample sizes can detect very small differences for a parameter value. A clinically meaningful effect should be determined, and confidence interval reported when possible A nonsignificant test result does not imply no effect (that H 0 is true). Many studies test many variables simultaneously. This can increase overall type I error rates

32 Family of t-distributions Symmetric, Mound-shaped, centered at 0 (like the standard normal (z) distribution Indexed by degrees of freedom (df)  the number of independent observations (deviations) comprising the estimated standard deviation. For one sample problems df = n-1 Have heavier tails (more probability over extreme ranges) than the z-distribution Converge to the z-distribution as df gets large Tables of critical values for certain upper tail probabilities are available (Table 3, p. 679)

33 Inference for Population Mean Practical Problem: Sample mean has sampling distribution that is Normal with mean  and standard deviation  /  n (when the data are normal, and approximately so for large samples).  is unknown. Have an estimate of , s obtained from sample data. Estimated standard error of the sample mean is: When the sample is SRS from N(  then the t-statistic (same as z- with estimated standard deviation) is distributed t with n-1 degrees of freedom

36 One-Sample Confidence Interval for  SRS from a population with mean  is obtained. Sample mean, sample standard deviation are obtained Degrees of freedom are df= n-1, and confidence level (1-  ) are selected Level (1-  ) confidence interval of form: Procedure is theoretically derived based on normally distributed data, but has been found to work well regardless for large n 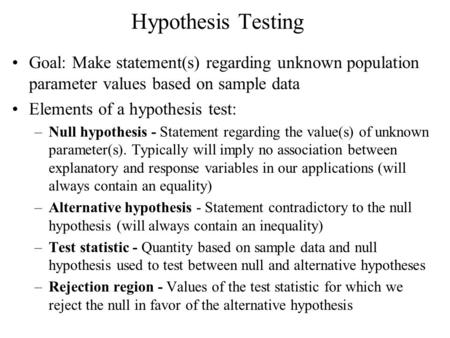 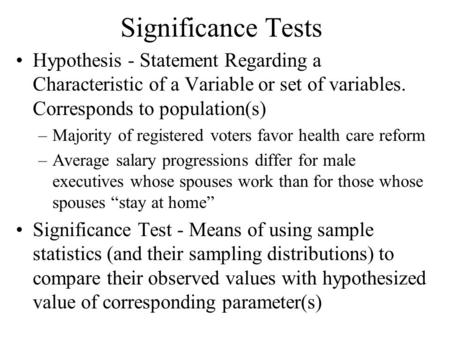 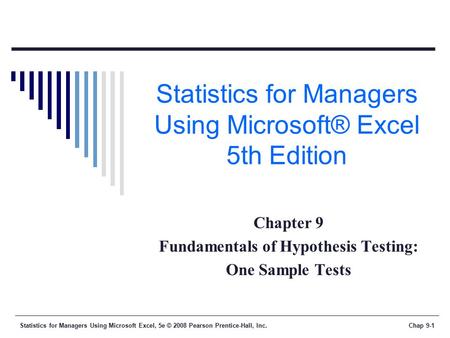 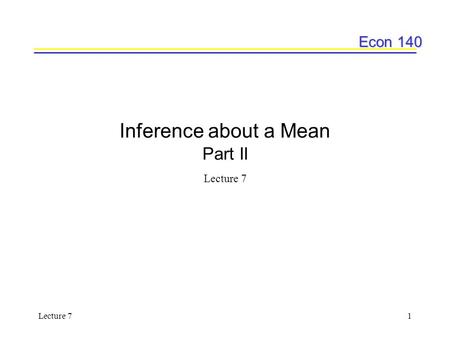 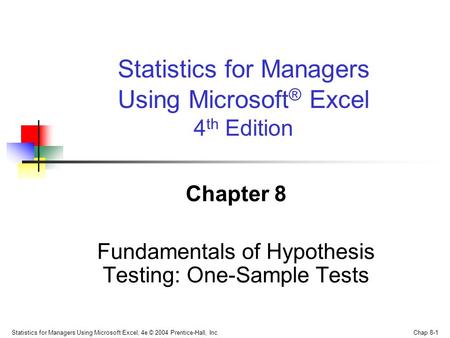 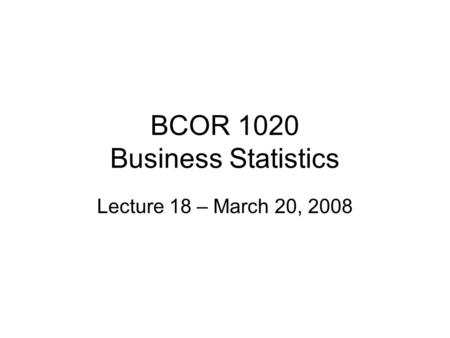