2 Acute Angle An angle that measures between 0 and 90 degrees.

4 Obtuse Angle An angle that measures between 90 and 180 degrees.

6 Reflex Angle An angle that measures between 180 and 360 degrees.

7 Complementary Angle Two angles that add up to 90 degrees.

8 Supplementary Angles Two angles that add up to 180 degrees.

9 Equilateral Triangle A triangle that has 3 equal sides.

10 Equiangular Triangle A triangle that has 3 equal angles and each measures 60 degrees (sum is 180).

12 Isosceles Triangle A triangle that has two equal sides and two equal base angles. 

13 Vertical Angles Two angles in which the sides of one angle are opposite rays to the sides of the second angle.

14 Adjacent Angles Two angles having a common vertex and a common side, but do not have any interior points in common.

15 Line Segment 2 points called endpoints and all of the points in between them.

16 Ray A part of a line that consists of a point on the line, called the endpoint, and all of the points on one side of the line.

17 Opposite Rays Two rays of the same line with a common endpoint and no other points in common.

18 Collinear A set of points all lying on the same straight line.

19 Midpoint The point of a line segment that divides it into 2 congruent (equal) parts.

20 Bisector A line, ray, or segment which divides a segment into 2 congruent parts.

22 Altitude The perpendicular segment from a vertex of a polygon to the opposite side.

23 Median A segment that joins any vertex of a triangle to the midpoint of the opposite side. 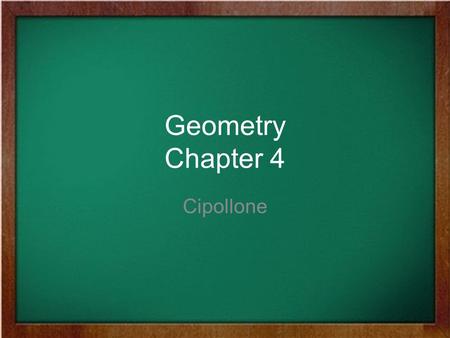 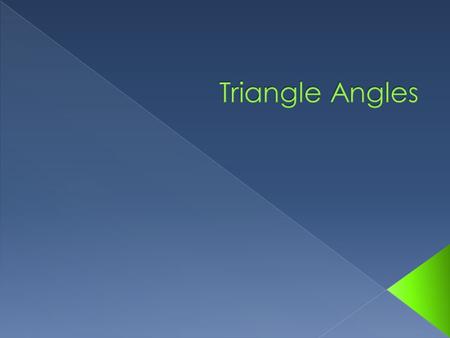 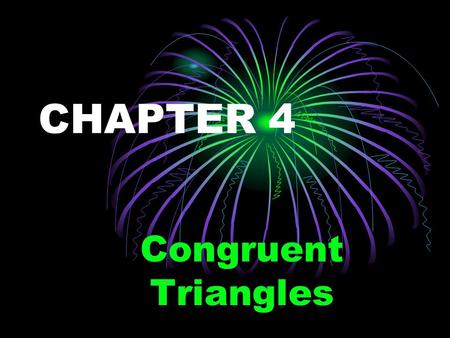 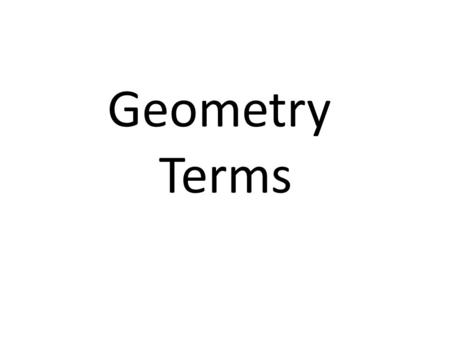 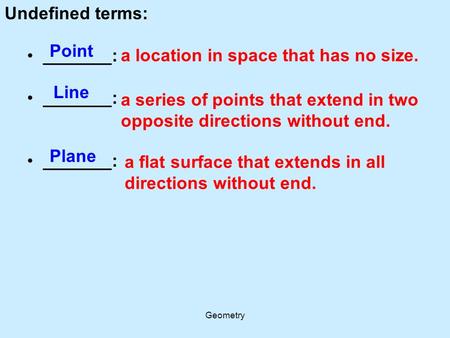 a location in space that has no size. 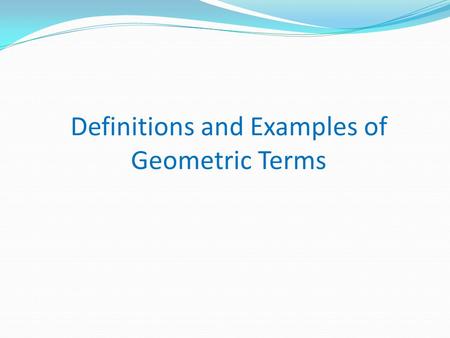 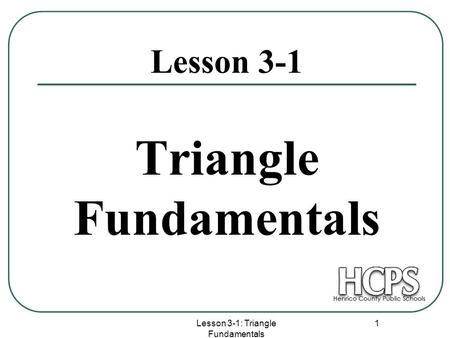 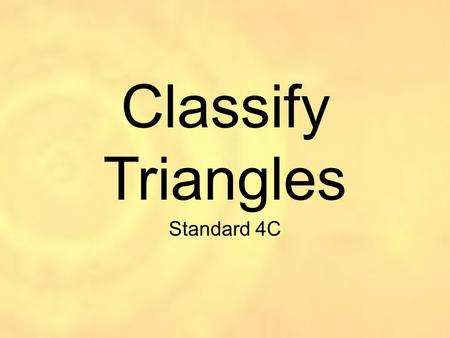 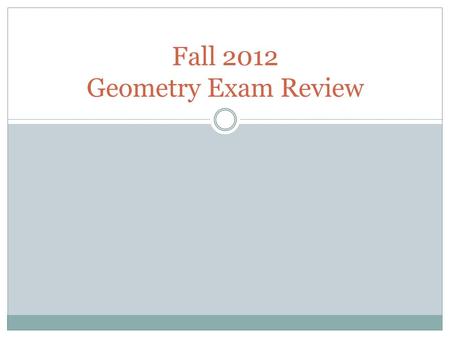 Fall 2012 Geometry Exam Review. Chapter 1-5 Review p ProblemsAnswers 1One 2a.Yes, skew b.No 3If you enjoy winter weather, then you are a member. 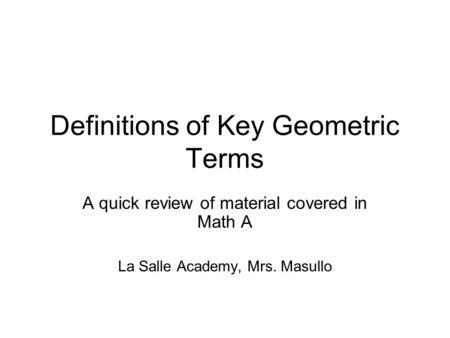 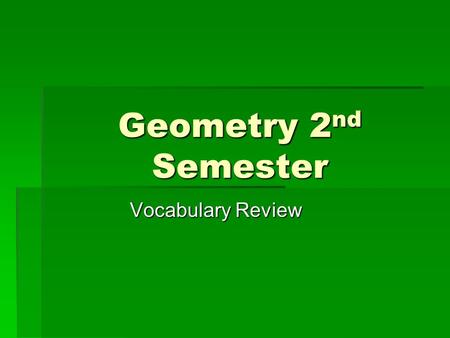 Geometry 2 nd Semester Vocabulary Review. 1.An arc with a measure greater than 180. Major arc 2.For a given circle, a segment with endpoints that are. 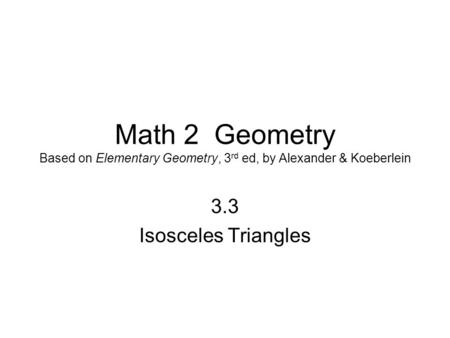 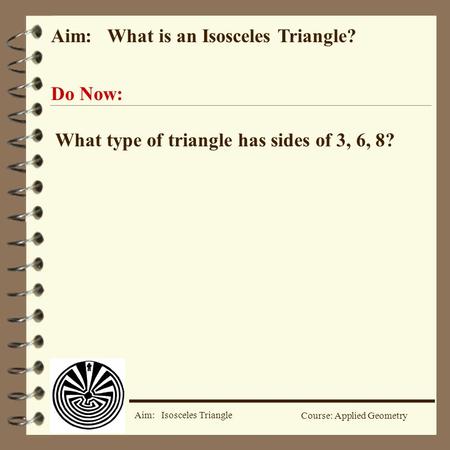 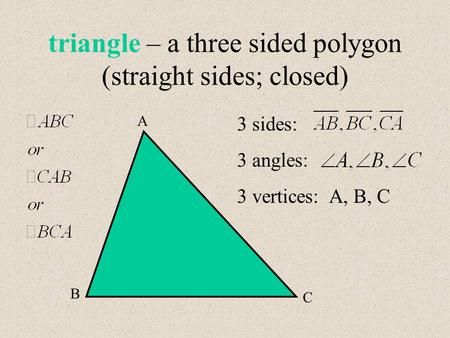 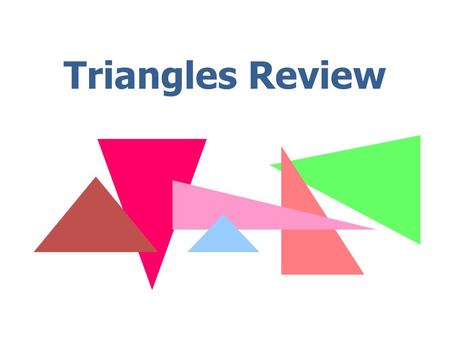 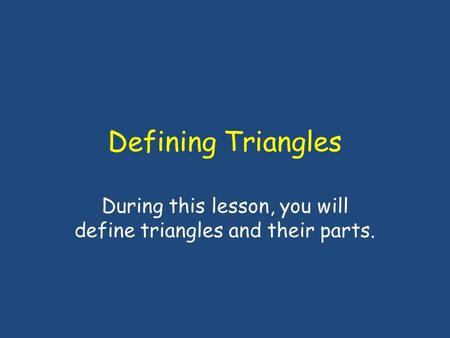 Defining Triangles During this lesson, you will define triangles and their parts. 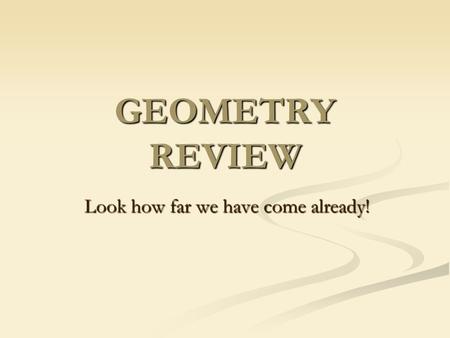 GEOMETRY REVIEW Look how far we have come already! 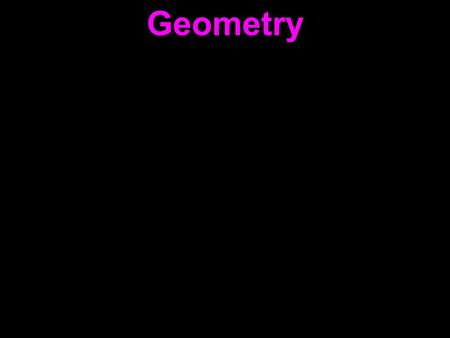 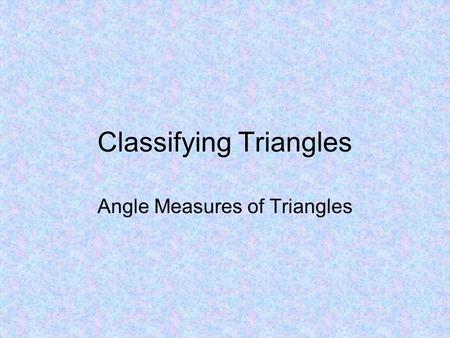 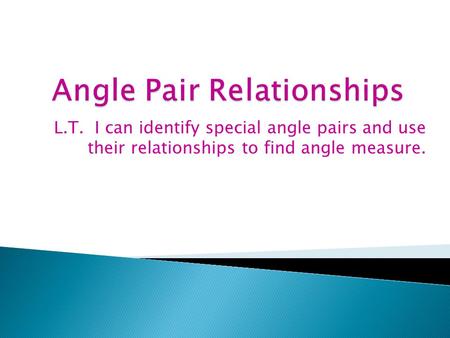 L.T. I can identify special angle pairs and use their relationships to find angle measure.