2 Inferential Statistics
Techniques that allow us to study samples and then make generalizations about the population. Inferential statistics are a very crucial part of scientific research in that these techniques are used to test hypotheses

5 Hypothesis Testing The purpose of the statistical test is to evaluate the null hypothesis (H0) at a specified level of significance (e.g., p < .05) In other words, do the treatment effects differ significantly so that these differences would be attributable to chance occurrence less than 5 times in 100?

7 Statistical Significance
A statement in the research literature that the statistical test was significant indicates that the value of the calculated statistic warranted rejection of the null hypothesis For a difference question, this suggests a real difference and not one due to sampling error

8 Parametric Statistics
Techniques which require basic assumptions about the data, for example: normality of distribution homogeneity of variance requirement of interval or ratio data Most prevalent in HHP Many statistical techniques are considered robust to violations of the assumptions, meaning that the outcome of the statistical test should still be considered valid

11 Hypothesis Testing Errors
Hypothesis testing decisions are made without direct knowledge of the true circumstance in the population. As a result, the researcher’s decision may or may not be correct Type I Error Type II Error

13 Type II Error . . . occurs when the researcher accepts the null hypothesis, when in fact it should have been rejected probability is equal to beta (B) which is influenced by several factors inversely related to alpha level increasing sample size will reduce B Statistical Power – the probability of rejecting a false null hypothesis Power = 1 – beta Decreasing probability of making a Type II error increases statistical power

16 One-way ANOVA Extension of independent groups t-test, but may be used for evaluating differences among 2 or more groups

17 Repeated Measures ANOVA
Extension of dependent groups t-test, where each subject is measured on 2 or more occasions a.k.a “within subjects design” Test of sphericity assumption is recommended

20 Assumptions of Statistical Tests
Parametric tests are based on a variety of assumptions, such as Interval or ratio level scores Random sampling of participants Scores are normally distributed N = 30 considered minimum by some Homogeneity of variance Groups are independent of each other Others Researchers should try to satisfy assumptions underlying the statistical test being used

22 Two-Group Comparison Tests
a.k.a. Multiple Comparison or Post Hoc Tests The various ANOVA tests are often referred to as “omnibus” tests because they are used to determine if the means are different but they do not specify the location of the difference if the null hypothesis is rejected, meaning that there is a difference among the mean scores, then the researcher needs to perform additional tests in order to determine which means (groups) are actually different

26 Chi Square A nonparametric test used with nominally scaled data which are common with survey research The statistic is used when the researcher is interested in the number of responses, objects, or people that fall in two or more categories

27 Single Sample Chi-Square
a.k.a one-way chi-square or goodness of fit chi-square Used to test the hypothesis that the collected data (observed scores) fits an expected distribution i.e. are the observed frequencies and expected frequencies for a questionnaire item in agreement with each other?

28 Independent Groups Chi-Square
a.k.a. two-way chi-square or contingency table chi-square Used to test if there is a significant relationship (association) between two nominally scaled variables In this test we are comparing two or more patterns of frequencies to see if they are independent from each other

33 Multiple Regression/Prediction
a.k.a multiple correlation Determines the relationship between one dependent variable and 2 or more predictor variables Used to predict performance on one variable from another Y’ = b1X1 + b2X2 + c Standard error of prediction is an index of accuracy of the prediction

34 Statistical Power The probability that the statistical test will correctly reject a false null hypothesis . . . it is effectively the probability of finding significance, that the experimental treatment actually does have an effect a researcher would like to have a high level of power

37 Alpha level Reducing the alpha level (moving from .05 to .01) will reduce the power of a statistical test. This makes it harder to reject the null hypothesis

41 Effect Size Numerous authors have indicated the need to estimate the magnitude of differences between groups as well as to report the significance of the effects One way to describe the strength of a treatment effect, or meaningfulness of the findings, is the computation of “effect size” (ES) ES = M1 - M2 SD Note: SD represents the standard deviation of the control group or the pooled standard deviation if there is no control group

42 Effect Size Interpretation of ES by Cohen (1988)
0.2 represents a small ES 0.5 represents a moderate ES 0.8 represents a large ES Researchers using experimental designs are advised to provide post hoc estimates of ES for any significant findings as a way to evaluate the meaningfulness

43 A Priori Procedures Calculate the power for each of the statistical procedures to be applied requires three indices - alpha, sample size, effect size Estimate the sample size needed to detect a certain effect (ES) given a specific alpha and power may require an estimation of ES from previous published studies or from a pilot study 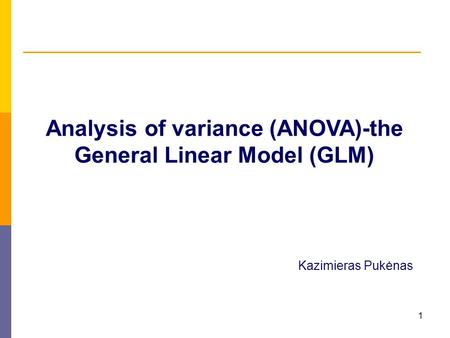 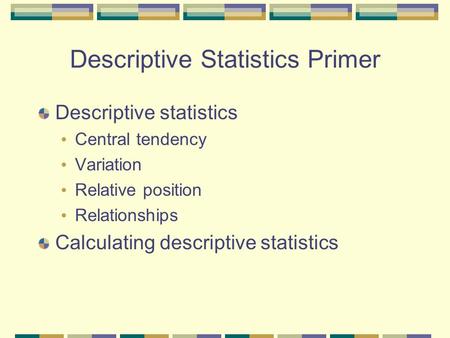 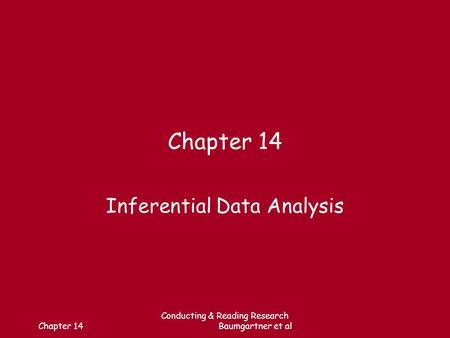 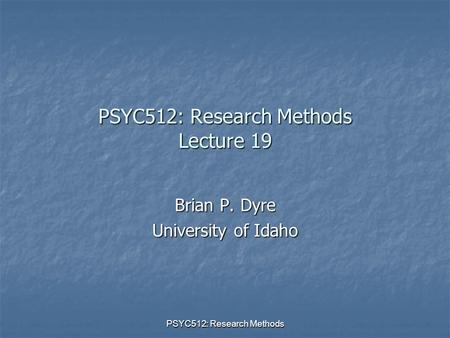 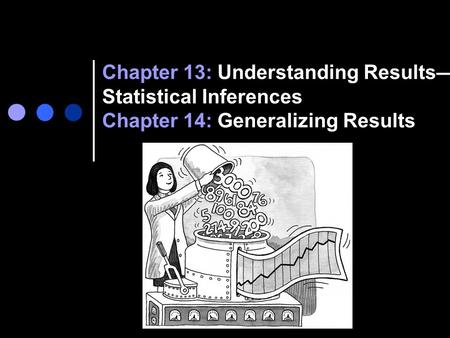