2 Uric acid is produced by xanthine oxidase from xanthine and hypoxanthine, which in turn are produced from purine. Mainly in liver, kidney, intestine.

5 In human blood plasma, the reference range of uric acid is
Male: 237.9～356.9μmol/L(4～6mg/dL), Female: ～297.4μmol(3～5mg/dL). This range is considered normal by the American Medical Association. Uric acid concentrations in blood plasma above ( >6mg/dL) and below (<3mg/dL) the normal range are known, respectively, as hyperuricemia and hypouricemia.

7 Produce too much uric acid
About 10% of cases of gout are due to overproduction of uric acid. When uric acid is overproduced, it is high not only in the blood but in the urine. ● Some people overproduce uric acid due to a genetic defect in an enzyme in the purine breakdown pathway which leads to overactivity of this pathway. ● Since cells contain DNA, and DNA contains purines, anything that increases the breakdown of cells in the body can lead to more uric acid . For example, if a patient is receiving chemotherapy for a tumor, as the treatment kills the tumor cells, hyperuricemia can develop as a result of the breakdown of the purines from those cells. ● Foods can also lead to overproduction of uric acid, such as meats and beans and beer, which contain high levels of purines.

9 Gout Excess serum accumulation of uric acid can lead to a type of arthritis known as gout. This painful condition is the result of needle-like crystals of uric acid precipitating in joints and capillaries. Gout can occur where serum uric acid levels are as low as 6 mg/dL (~357µmol/L). Man get gout more than women, and at younger ages, the male to female ratio is 9:1. The most common age of onset is from age years.

12 Toe with Acute Attack of Gout

13 uric kidney stones Saturation levels of uric acid in blood may result in one form of kidney stones when the urate crystallizes in the kidney. These uric acid stones are radiolucent and so do not appear on an abdominal plain x-ray or CT scan. Their presence must be diagnosed by ultrasound for this reason Very large stones may be detected on x-ray by their displacement of the surrounding kidney tissues. Some patients with gout eventually get uric kidney stones

14 How to treat? One treatment for gout has been administration of Lithium salts; lithium urate is more soluble. 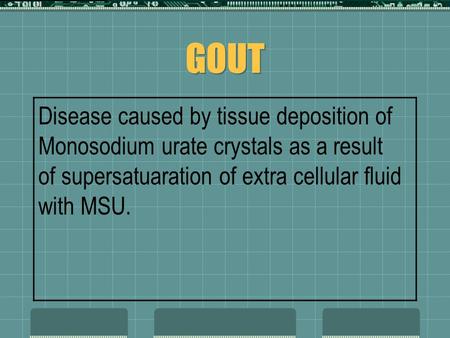 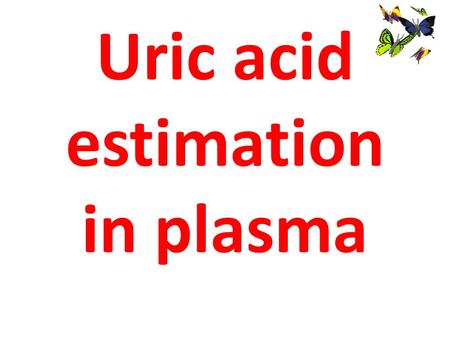 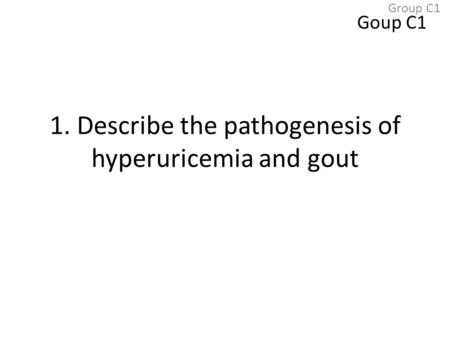 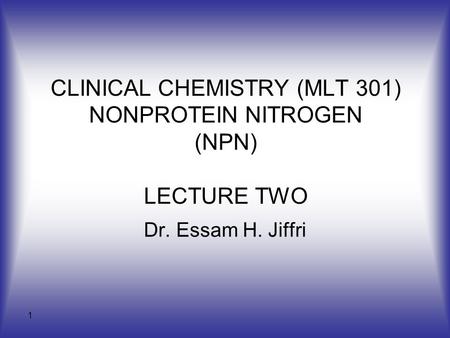 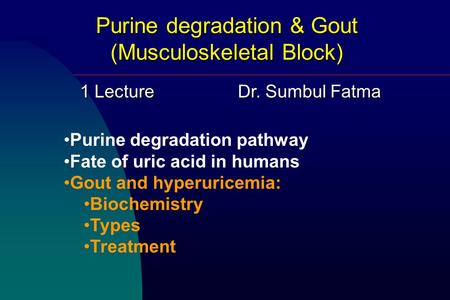 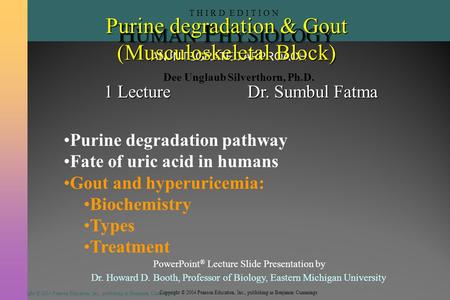 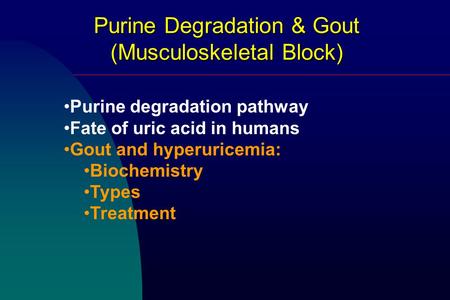 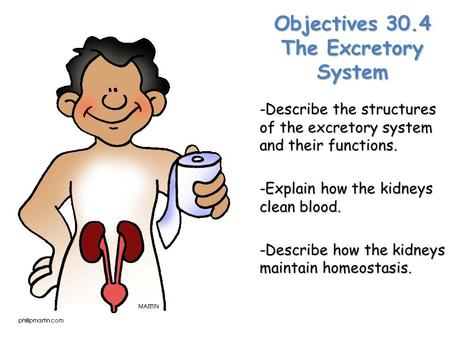 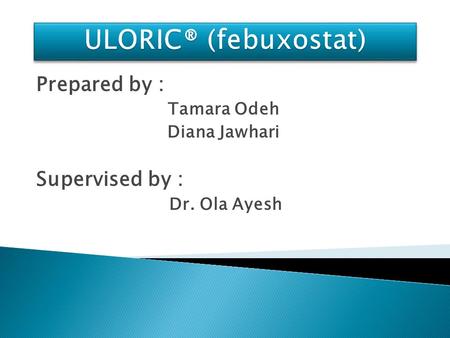 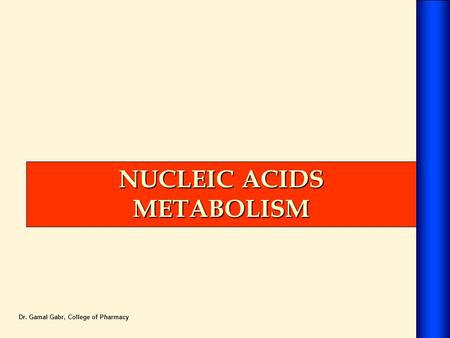 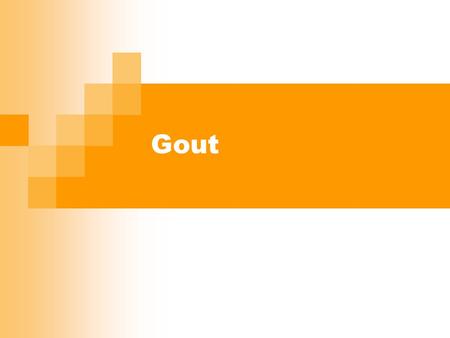 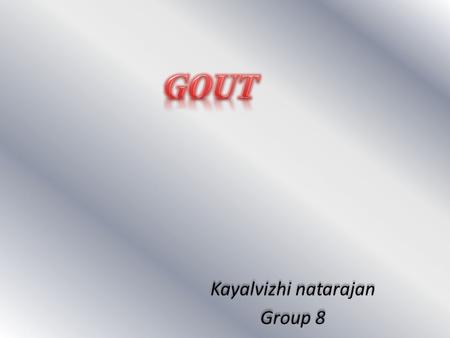 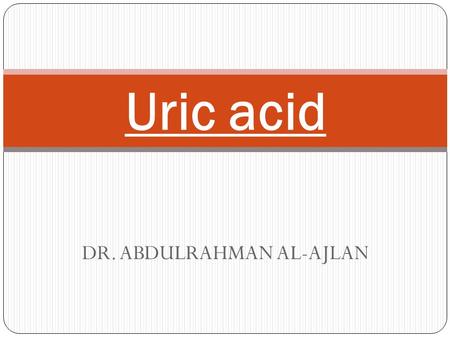 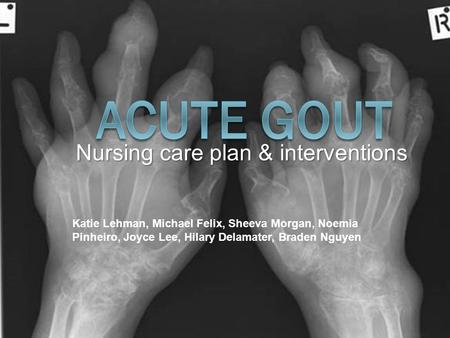 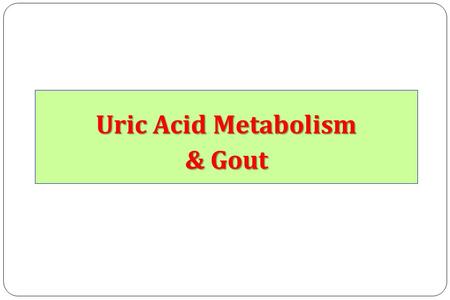 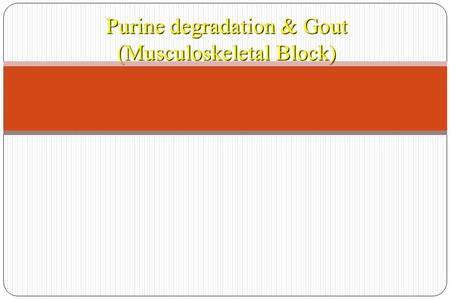 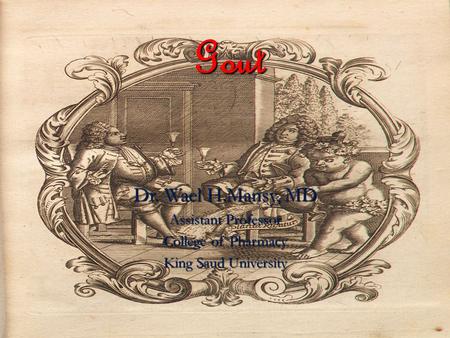 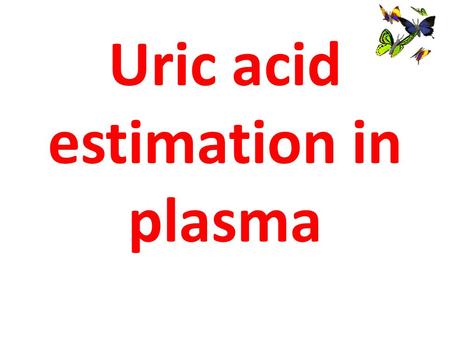 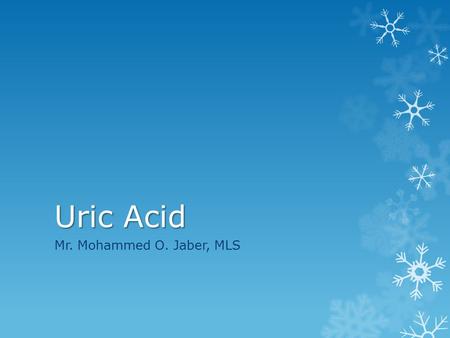 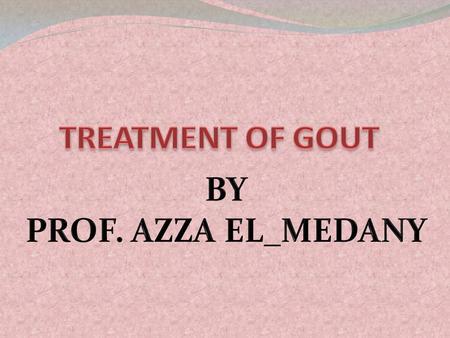