1 Chapter 16: The Federal Court System
Structure, Nature, and Politics of the Judicial System

2 Case Study: Miranda V. Arizona, 1965
Question: Does the police practice of interrogating individuals without notifying them of their right to counsel and their protection against self-incrimination violate the Fifth Amendment?

5 Participants in the Judicial System
Litigants: plaintiff and defendant Groups: NAACP, ACLU, etc. Attorneys: Over 750,000 today in the United States Legal Services Corporation: lawyers to assist the poor (Access to quality lawyers is not equal.) Jury—the people (normally 12) who often decide the outcome of a case Groups: Use the courts to try to change policies Amicus Curiae briefs used to influence the courts which are “friend of the court” briefs used to raise additional points of view and information not contained in briefs of formal parties

6 Organization of the Federal Court System

7 The Structure of the Federal Court System

9 Differences among Courts
Original Jurisdiction: Courts where cases are heard first; usually in a trial; determine facts about the case; More than 90% of court cases begin and end in the court of original jurisdiction Appellate jurisdiction: Courts hear cases brought to them on appeal from a lower court; do not review factual record, only deal with the legal issues involved (Miranda rights, etc.)

10 District Courts 91 federal district courts of original jurisdiction Jurisdiction extends to Federal crimes Civil suits under federal law Civil suits between citizens of different states where the amount exceeds $50,000 Supervision of bankruptcy proceedings Review of the actions of some federal administrative agencies Admiralty and maritime law cases Supervision of the naturalization of aliens Each of the 91 regular districts has a U.S. attorney who is nominated by the president and confirmed by the Senate and who serves a the discretion of the president (not lifetime appointments) They prosecute violators of federal law and represent the U.S. government in civil cases

13 Court of Appeals Appellate Jurisdiction:
reviews the legal issues in cases brought from lower courts Hold no trials and hear no testimony 12 circuit courts U.S. Court of Appeals for the Federal Circuit – specialized cases Focus on errors of procedure and law Courts empowered to review all final decisions of district courts Also have the authority to review and enforce orders of many federal regulatory agencies such as the SEC and NLRB About 90% of the more than 50,000 cases heard in the courts of appeals each year come from the district courts

14 Court of Appeals The US is divided into 12 judicial circuits, including one for the District of Columbia. Each circuit serves at least two states and has between 6 and 28 permanent circuit judgeships (179 in all) Each court of appeals normally hears cases in panels consisting of three judges Decisions in either arrangement are made by majority vote of the participating judges

15 Court of Appeals Continued
There is also a special court of appeals called the U.S. Court of Appeals for the Federal Circuit composed of 12 judges (special cases only) Appellate courts focus on correcting errors of procedure and law that occurred in the original proceedings of legal cases Hold no trial and hear no testimony Set precedent for all courts and agencies within their jurisdictions

17 The Structure of the Federal Judicial System
The Supreme Court Ensures uniformity in interpreting national laws, resolves conflicts among states and maintains national supremacy in law 9 justices – 1 Chief Justice, 8 Associate Justices Supreme Court decides which cases it will hear—controls its own agenda Some original jurisdiction, but mostly appellate jurisdiction Most cases come from the federal courts Most are civil cases

18 The Structure of the Federal Judicial System

20 Where did the Case originate?

21 The Politics of Judicial Selection
Presidents appoint members of the federal courts with “advice and consent” of the Senate. The Lower Courts Appointments handled through Senatorial Courtesy: Unwritten tradition where a judge is not confirmed if a senator of the president’s party from the state where the nominee will serve opposes the nomination Has the effect of the president approving the Senate’s choice President chooses to have more influence on appellate level

22 The Politics of Judicial Selection
The Supreme Court Fewer constraints on president to nominate persons to Supreme Court NO CONSTITUTIONAL REQUIREMENT FOR JUDGES President relies on attorney general and DOJ to screen candidates 1 out of 5 nominees will not make it!! Presidents with minority party support in the Senate will have more difficulty. Chief Justice can be chosen from a sitting justice, or as a new member to the Court

23 The Politics of Judicial Selection
The Constitution sets no special requirements for judges or justices Federal judges have typically held office as a judge or prosecutor, and often they have been involved in partisan politics All lawyers Typically justices have held high administrative or judicial positions before moving to the Supreme Court (DOJ, Federal appellate judge)

24 The Backgrounds of Judges and Justices
Characteristics: Generally white males Lawyers with judicial and often political experience Other Factors: Generally of the same party and ideology as the appointing president Judges and justices may not rule the way presidents had hoped they would have.

25 The Backgrounds of Judges and Justices

26 The Courts as Policymakers
Accepting Cases: Appellate and Supreme Court have MUCH more control over their agenda; Justices meet in conference twice a week privately to review the “discuss list” and decide which cases they want to discuss (rely heavily on their law clerks to screen each case) Put case on docket by writ of certiorari—a formal document that calls up a case

27 The Courts as Policymakers
Accepting Cases Use the “rule of four” to choose cases Issues a writ of certiorari to call up the case Supreme Court accepts few cases each year Figure 16.4

28 The Courts as Policymakers
Accepting Cases (continued) The Solicitor General: a presidential appointee and third-ranking office in the Department of Justice is in charge of appellate court litigation of the federal government Four key functions: Decide whether to appeal cases the government lost Review and modify briefs presented in appeals Represent the government before the Supreme Court Submit a brief on behalf of a litigant in a case in which the government is not directly involved

29 Solicitor General Presidential appointee and third-ranking official in the Department of Justice, in charge of the appellate court litigation of the federal government Donald B. Verrilli, Jr.: Sworn in as the 46th Solicitor General of the United States on June 9, 2011.

31 Court as Policymakers In session from Oct. – June
Hears oral arguments in two-week cycles (2 weeks of courtroom arguments and 2 weeks of reflecting on cases and writing opinions about them Making decisions: Weekly conference meetings are held to discuss cases actually accepted and argued before the Court Stare decisis: an earlier decision should hold for the case being considered

32 The Courts as Policymakers
Making Decisions Oral arguments heard by the justices Justices discuss the case One justice will write the majority opinion (statement of legal reasoning behind a judicial decision) on the case Figure 16.5

33 Court as Policymakers Implementing Court decisions
Judicial implementation: refers to how and whether court decisions are translated into actual policy, thereby affecting the behavior of others

35 Understanding the Courts
The Courts and Democracy Courts are not very democratic…. Not elected Difficult to remove judges and justices The courts often reflect popular majorities Groups are likely to use the courts when other methods fail, which promotes pluralism There are still conflicting rulings leading to deadlock and inconsistency

36 What Courts Should Do: The Scope of Judicial Power
Judicial restraint: judges should play a minimal policymaking role Judicial activism: judges should make bold policy decisions and even chart new constitutional ground Political questions: means of the federal courts to avoid deciding some cases Statutory construction: the judicial interpretation of an act of Congress 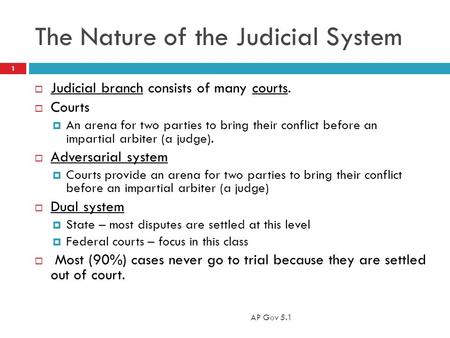 The Nature of the Judicial System  Judicial branch consists of many courts.  Courts  An arena for two parties to bring their conflict before an impartial. 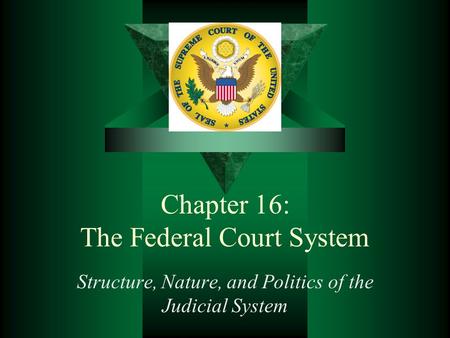 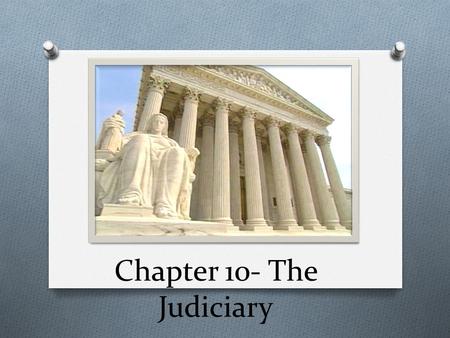