 Cornea: ◦ Tissue that forms a transparent, curved structure in front of the eye ◦ Refracts light before it enters the eye  Retina: ◦ A layer of cells.

Presentation on theme: " Cornea: ◦ Tissue that forms a transparent, curved structure in front of the eye ◦ Refracts light before it enters the eye  Retina: ◦ A layer of cells."— Presentation transcript:

3  Cornea: ◦ Tissue that forms a transparent, curved structure in front of the eye ◦ Refracts light before it enters the eye  Retina: ◦ A layer of cells (known as rods and cones) that respond to light and initiate nerve responses  Rod cells are very sensitive to light but cannot distinguish between colours  Cone cells detect colour

4  Recall: normally, when an object moves in front of a lens, its image moves; moving the lens has the same effect  This won’t work in the eye – images from different distances need to focus on the retina, but the distance between the retina and the lens is always the same  So what happens?

5  The cornea refracts light in the same way regardless of the location of the object  The lens, however, can change shape and refract light to a different extent  This allows it to focus light from both nearby and distant objects onto the retina  The ciliary muscles (or ciliary bodies) make the lens shorter and thicker by pulling on it

6  This process is called accomodation  To focus on a nearby object, the curvature of the lens needs to be greater because it needs to refract light more

8  Myopia is near-sightedness ◦ The eyes cannot focus on distant objects  Caused by the eyeball being too long  The image forms in front of the retina, not on it  By the time light rays reach the retina they have begun to diverge, and the image looks fuzzy

9  Adding a diverging lens spreads out the parallel light rays before they reach the eye  The rays that are separating from each other appear to be coming from an object that is closer to the eye  Due to the higher angle of incidence, when the eye refracts the light, it is focused correctly on the retina

10  Hyperopia is far-sightedness ◦ The eyes cannot focus on nearby objects  Caused by the eyeball being too short  Light rays entering the eye reach the retina before they converge at a point, causing the image to be blurry

11  Adding a converging lens bends the rays slightly inward before they enter the eye  The lens of the eye then refracts them more, and causes the rays to be correctly focused on the retina

12  As a person ages, the lenses of the eye become stiffer, and the ciliary muscles can no longer make them change shape  This condition is called presbyopia  People with presbyopia cannot focus on nearby objects, but this is not farsightedness (which is caused by an incorrect eyeball length)  If someone is already nearsighted and gets presbyopia, they cannot focus on distant OR nearby objects!  To correct this condition, people wear bifocals

14  Astigmatism is blurred or distorted vision that is usually caused by an incorrectly shaped cornea  Instead of being rounded, the cornea is oval-shaped  Part of an image might be in focus, but the rest of the image is blurry  This is corrected by using lenses that have a cylindrical curvature ◦ Refracts incident light rays along one axis only

Download ppt " Cornea: ◦ Tissue that forms a transparent, curved structure in front of the eye ◦ Refracts light before it enters the eye  Retina: ◦ A layer of cells." 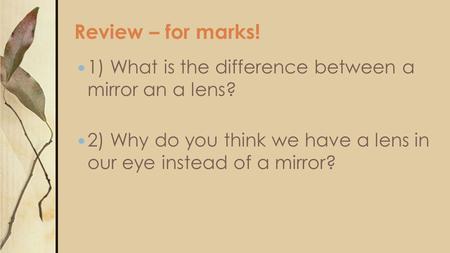 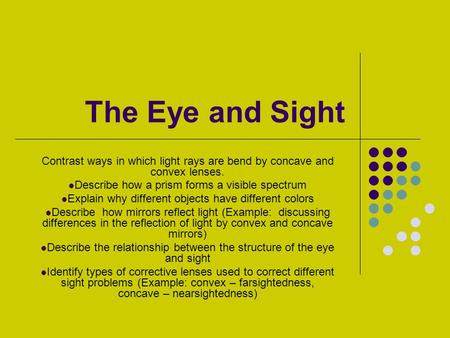 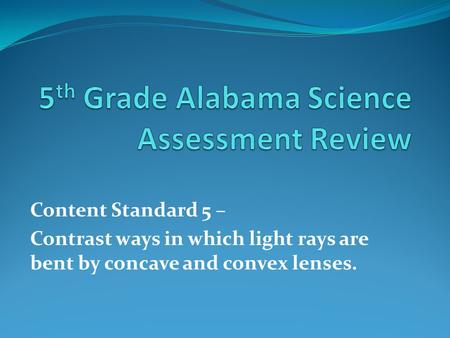 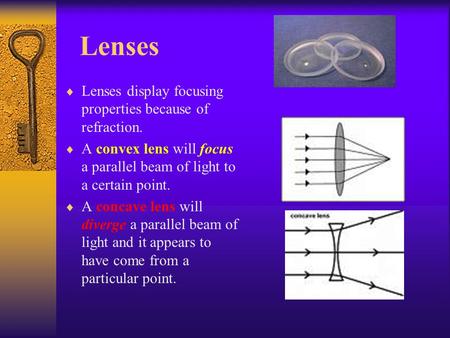 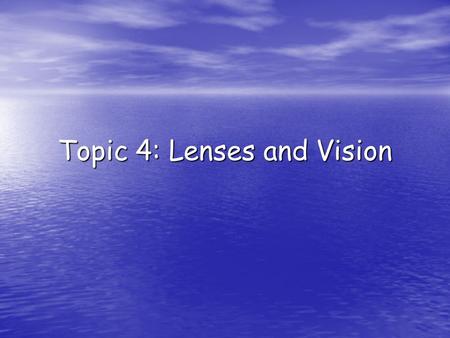 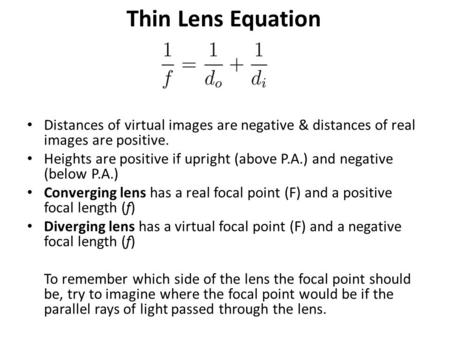 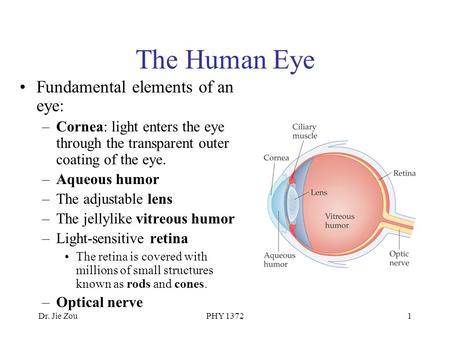 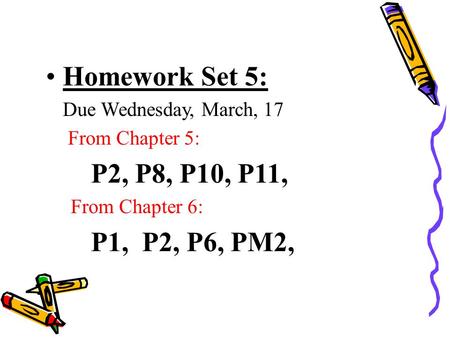 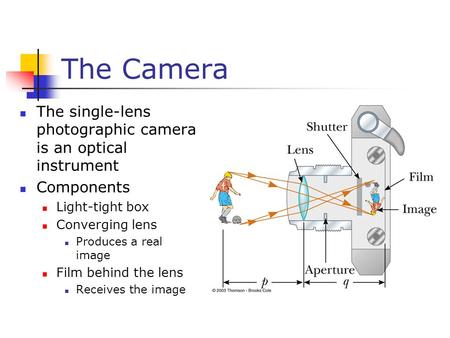 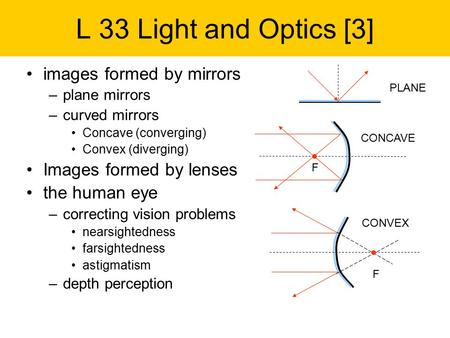 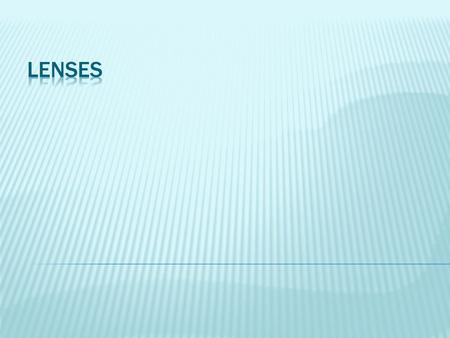 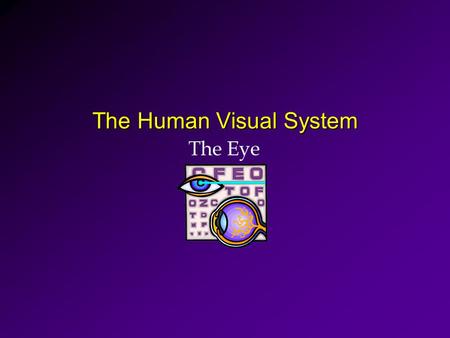 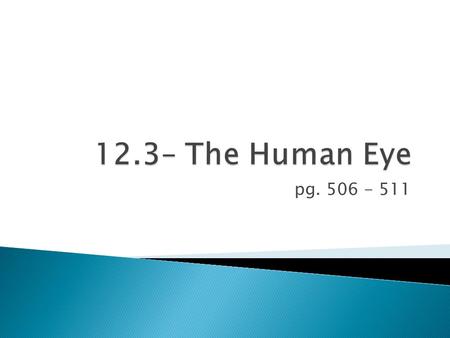 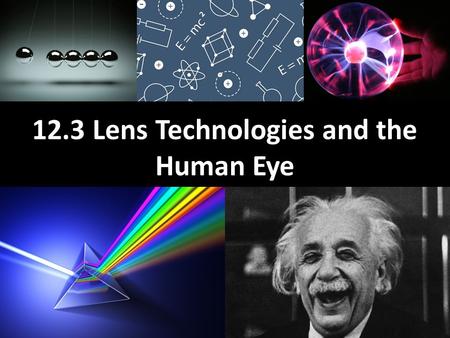 12.3 Lens Technologies and the Human Eye 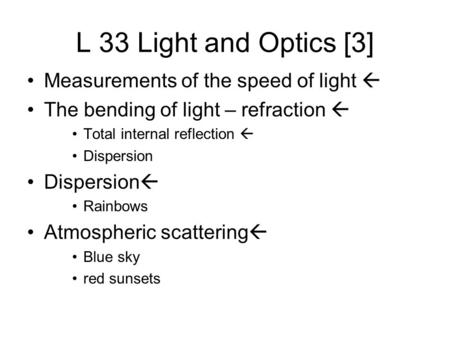 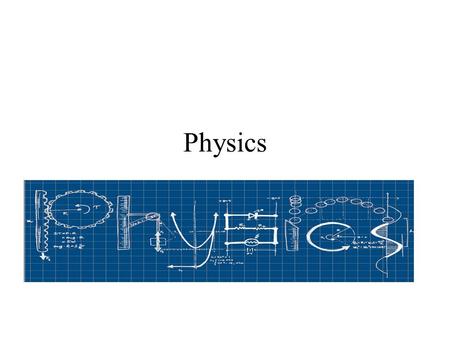 Physics. PHS 5041 Optics Lenses Lenses are transparent objects with at least one curved surface. Lenses can be: _Convex or converging (***thickest at.