2 What is genetic engineering???
Genetic engineering: is the artificial manipulation or alteration of genes. Genetic Engineering involves: removing a gene (target gene) from one organism inserting target gene into DNA of another organism ‘cut and paste’ process.

4 Genetic Engineering breaks the species barrier!!!
Genetic engineering allows DNA from different species to be joined together. This often results in combinations of DNA that would never be possible in nature!!! For this reason genetic engineering is not a natural process. If DNA is transferred from one species to another the organism that receives the DNA is said to be transgenic.

7 Tools used in genetic engineering!!!
Source of DNA: Target (foreign) DNA – DNA taken from one organism to be placed into the DNA of a second organism. A cloning vector: Special kind of DNA that can accept foreign DNA and exactly reproduce itself and the foreign DNA e.g. Bacterial plasmid (loop of DNA found in bacteria).

10 Tools used in Genetic Engineering
DNA Ligase: enzyme which acts like a glue sticking foreign DNA to DNA of the cloning vector. will only work if DNA from the two DNA sources has been cut with the same restriction enzyme i.e. sticky ends of cut DNA will be complementary to each other. Please note diagram illustrating use of restriction enzymes and DNA Ligase in production of recombinant DNA Fig pg. 195

11 Process of Genetic Engineering
Five steps involved in this process: Isolation Cutting Insertion (Ligation) Transformation Expression Note: The following example will explain how a human gene is inserted into a bacterium so that the bacterium can produce human insulin.

12 Process of Genetic Engineering
Isolation: Removal of human DNA (containing target gene). Removal of plasmid (bacterial DNA) from bacterium. Cutting: Both human DNA and plasmid DNA are cut with the same restriction enzyme. Normally plasmid has only one restriction site while human DNA will have many restriction sites. Please note diagram 19.7 pg. 196

13 Process of Genetic Engineering
Insertion: means that target gene is placed into the DNA of the plasmid or cloning vector. cut plasmids are mixed with human DNA sections allowing the cut ends to combine. Transformation Expression

14 Applications of Genetic Engineering
You must know three applications: one involving a plant, one animal and one for a micro-organism. Plants: Weed killer-resistant crops many types of crop plants have bacterial genes added to them. these genes make the plants resistant to certain weed killers (herbicides). this means that the weed killers kill the weeds but do not affect the transgenic plants.

15 Applications of Genetic Engineering
Animals: There is a growing trend to experiment with inserting human genes into the DNA of other mammals. The transgenic animals formed in this way will then produce a human protein and secrete it into their milk or even into their eggs.

16 Applications of Genetic Engineering
Animals: Sheep produce human clotting factor A human gene has been inserted into the DNA of sheep. This allows the adult sheep to produce a clotting chemical needed by haemophiliacs to clot their blood – produced in the milk of the sheep. Pharming: is the production of pharmaceuticals by genetically modified animals i.e. sheep, cows, goats etc.

18 Applications of Genetic Engineering
Micro-organisms: Bacteria make insulin The human insulin gene has been inserted into a bacterium (E-coli). This allows the bacterium to produce insulin for use by diabetics.

20 Ethical Issues in Genetic Engineering
GMO’s as a food source: Outlined below are some fears associated with the use of GMO’s as a food source: Cannibalism: – eating an animal containing a human gene is a form of cannibalism. - feeding GMO’s containing human genes to animals that would later be eaten by humans. Religious reasons: – eating pig genes that are inserted into sheep would be offensive to Jews and Muslims. Offensive to vegetarians/vegans: – eating animal genes contained in food plants cause concern.

21 Ethical Issues in Genetic Engineering
Animal Welfare: There is serious concern that animals will suffer as a result of being genetically modified. use of growth hormones may cause limb deformation and arthritis as animals grow.

22 Ethical Issues in Genetic Engineering
Genetic Engineering in Humans: The following issues are a cause for concern: If tests are carried out for genetic diseases, who is entitled to see the results? Tests on unborn babies – could this lead to abortion if a disease is shown to be present? Insurance/lending companies – will they insist on genetic tests before they will insure/lend money to a person? Need for legal controls over the uses to which human cells can be put. Development and expansion of eugenics. 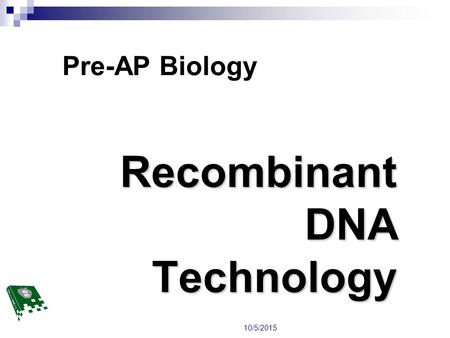