2 Old Testament “Old” does not mean out of date
Paves the way for the new Needed to understand the new Foundation of our identity as a people, a family of faith Contains the revelation of God which lays the framework for our Christian faith Sacred to both Christians and Jewish people Different Canon for Catholics and Protestant Christians

3 Pentateuch The core or center of the Old Testament
The first five books of the Old Testament. It contains the creation story and other origin stories along with the history of the early peoples chosen by God. Genesis (Creation to the Patriarchs) It contains the major covenant with God and the Laws pertaining to that covenant. Exodus (10 Commandments) Leviticus (purity, ritual and social justice laws) Accounts of the Desert Wanderings Numbers Deuteronomy (10 Commandments) Spans the time from Creation to the death of Moses.

4 Historical Books The sixteen historical books of the bible tell the story of God at work in the history of ancient Israel from the settlement of Canaan to the Kingdom of the Maccabees. They include the tribal confederation, the United Kingdom, the divided Kingdoms, the exile and return, the domination by foreign powers and a short period of independence.

5 Wisdom Books 7 books that are a collection of prayers and songs for worship, wise sayings, proverbs, and short stories that offer insights into the proper way to live.

6 Books of the Prophets 18 books of the Old Testament that contain the sermons, dreams and visions of the prophets of God. Prophets were messengers of God that worked to keep the people (king) faithful to the covenant

7 New Testament Fulfills the promises of the Old Testament
Is not part of Hebrew Scripture Contains the core of the Bible, the Gospels Contains the actions and teachings of the Early Church

8 Gospels The core or center of Scripture
4 accounts about the life, works, teachings, death and resurrection of Jesus Christ. Written by the 4 evangelists: Matthew Mark Luke John Matthew, Mark and Luke are synoptic Gospels This means thy are similar “seen with the same eye” John’s gospel is written from a different perspective

9 Acts of the Apostles Written by the evangelist, Luke
Sometimes called Gospel of Luke, II The continuation of Jesus earthly mission through the actions of his closest followers, the apostles. The beginning of the Catholic Church. Includes the account of the Pentecost, the conversion of Paul and especially the actions of Peter and Paul

11 Book of Revelations An account of the conflict between good and evil and the promise of a new world to come in which God triumphs and takes his followers with him. Written by John, a Jewish-Christian prophet 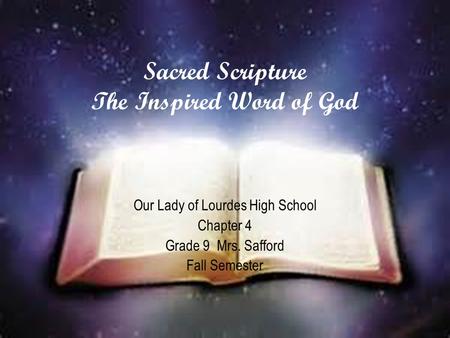 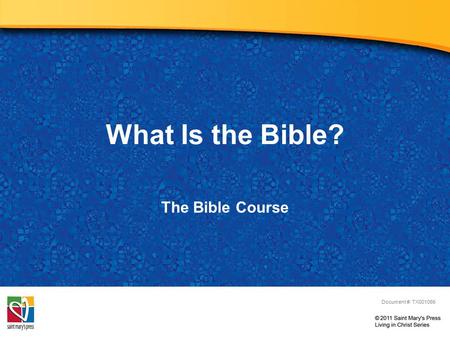