1 Impact of Sea Surface Temperature and Soil Moisture on Seasonal Rainfall Prediction over the Sahel Wassila M. Thiaw and Kingtse C. Mo Climate Prediction Center/NCEP/NOAA Washington, DC Discussions Precipitation forecasts over the Sahel from the NCEP coupled forecast system (CFS) model were compared to the gauge rainfall analysis. The CFS ensemble forecasts for JAS from initial conditions in June show a southward shift in the West African rain band (Fig. 2). This leaves the Sahel very dry. The southward shift of the rain band is accompanied by the southward shift of the AEJ. The CFS forecasts also do not capture the interannual variability in the Sahel rainfall quite adequately (Fig. 1). The suppressed interannual variability in P suggests the existence of persistent erroneous forcing. The model simulations and CFS (corrected) have better representation of the position of the AEJ and the spatial distribution of rainfall across West Africa (Fig. 3 and 4). They also show more realistic interannual rainfall variability. Part of the P errors comes from the SST systematic errors (Fig.5, 6). For the forecasts on the seasonal time scales, SSTs have dominant influence on rainfall over the Sahel. The systematic error pattern is similar to the decadal SST mode. It shows positive SSTs over the North Pacific and the North Atlantic and negative errors in the tropical Pacific and the southern oceans (Fig. 7, 8). During the CFS forecasts, the systematic errors are not corrected so they serve as additional forcing. The persistence of the errors in the SST pattern may cause the errors in rainfall magnitudes and the suppressed variability. The CFS model does not have realistic ice model as a subcomponent. The ice information is supplied through the mean monthly climatology and the ocean coupling is limited to the south of 65N. These model deficiencies may contribute to the warming over the North Pacific and the North Atlantic. In addition to the SST errors, the soil moisture feedback mechanism may also contribute to the southward shift of the AEJ and rainfall. This is demonstrated by the comparison between the AMIP run and the simulations (Fig. 9, 11). Both experiments are forced with the observed SSTs. The main differences are in soil moisture and surface fluxes. The SIMs are initialized from the R2 in June and has realistic information on soil moisture and surface fluxes. The AMIP, which is a continuous run, does not have such information. The AMIP run shows the southward shift of the AEJ, while the SIMs provide a better representation of the jet location and rainfall spatial pattern. As expected, the AMIP has less soil moisture over the Sahel and less E. E contributes to P directly, but the largest influence is indirect through the temperature gradients. The radiation differences are smaller so E is balanced by sensible heat. Less E implies more sensible heat and indeed the AMIP is warmer over the Sahel than the SIMs. This implies that the largest temperature gradients over West Africa in the AMIP are located further south than in the SIMs. The temperature gradients reach the middle troposphere (Fig. 10). This serves as a forcing to move the AEJ southward. In response, The African wave disturbances, which account for much of the rains in the Sahel shift southward resulting in dryness over the Sahel. As it is well known, the most important contribution to rainfall variability over the Sahel is the decadal mode. The AMIP forced with the observed SSTs does not capture the decadal changes in rainfall. The model does not have interactive vegetation fraction and does not use the information of the leaf area index (LAI). The vegetation fraction is supplied to the model through the monthly mean vegetation fraction climatology. Therefore, it is not able to simulate the changes of albedo and surface fluxes due to the greenness of vegetation. Vegetation dynamics is a significant process in simulating rainfall over the Sahel and it has been found that the decadal variability which is the essential part of the rainfall variability over the Sahel is better produced when the interactive vegetation is added to the model. Therefore, a land-surface interaction model coupled with the CFS will improve precipitation forecasts over the Sahel. Thiaw, W. M., and K. C. Mo, 2005: J. Climate, In press. Wassila.thiaw@noaa.gov; kingtse.mo@noaa.gov 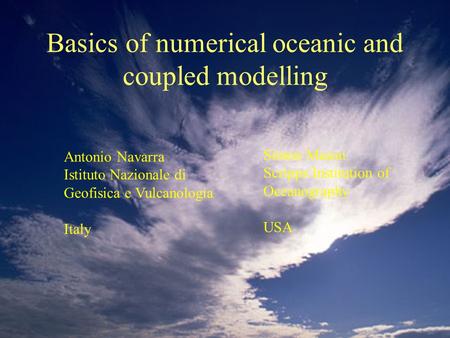 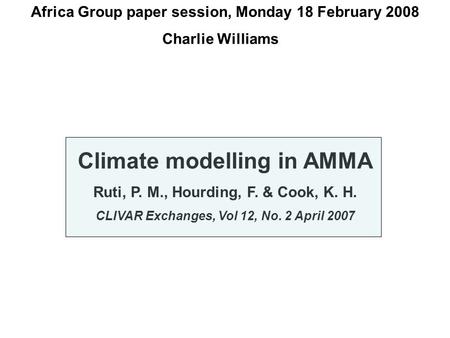 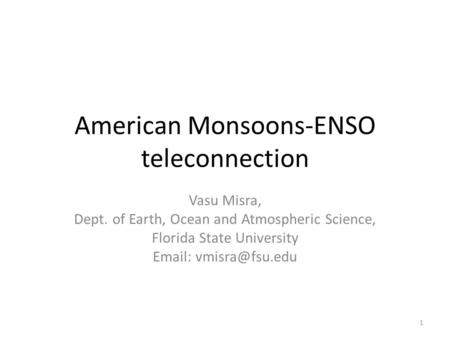 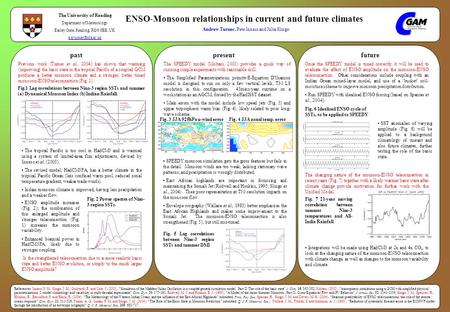 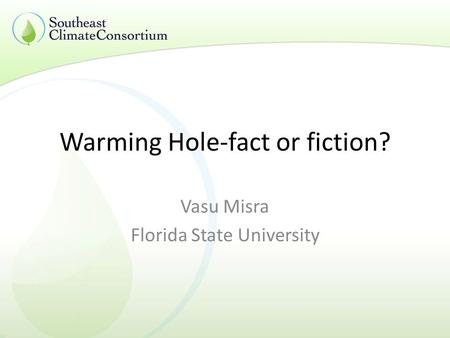 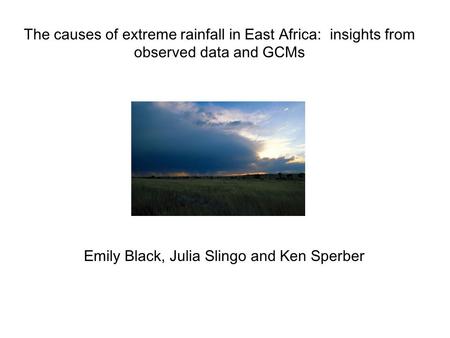 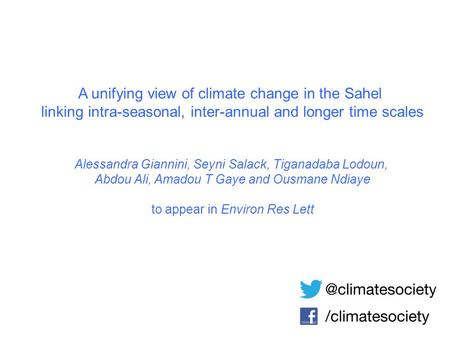 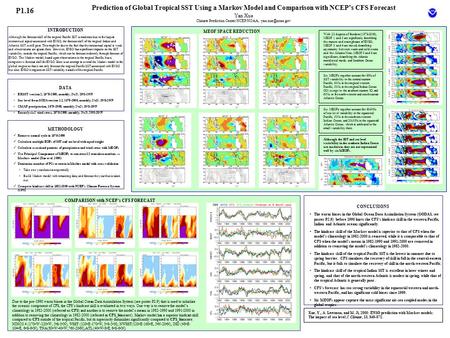 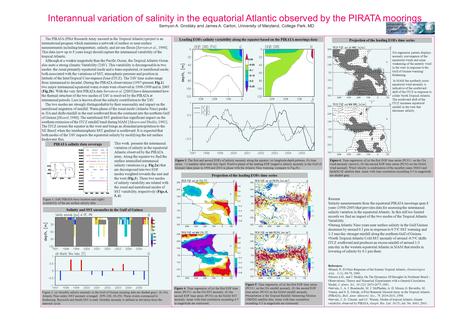 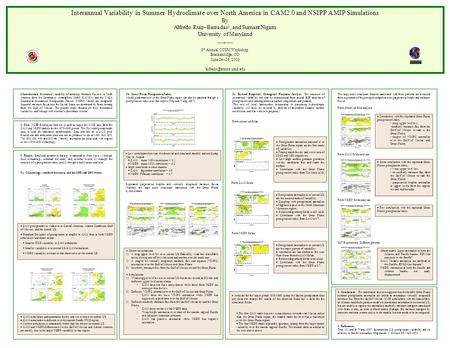 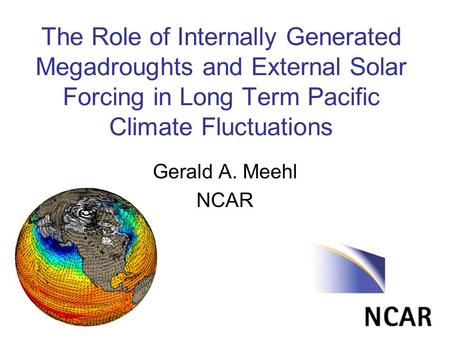 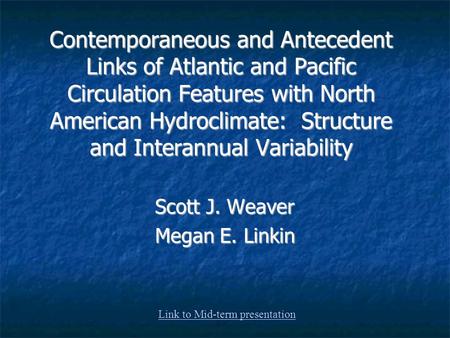 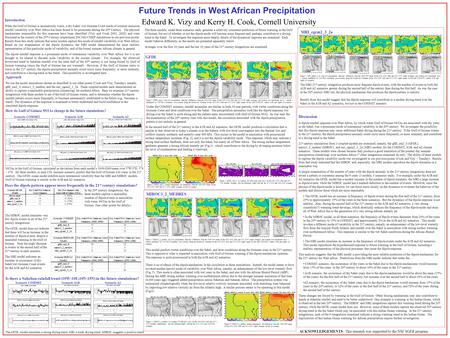 This model predicts wetter conditions over the Sahel, and drier conditions along the Guinean coast in the 21 st century. This is opposite to what is expected. 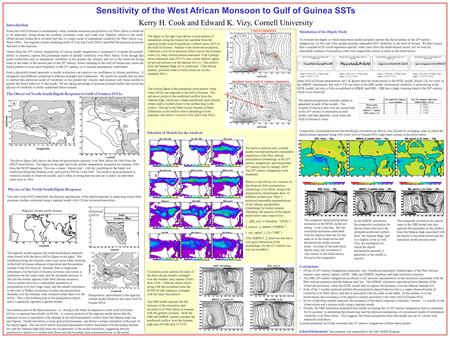 Sensitivity of the West African Monsoon to Gulf of Guinea SSTs Kerry H. Cook and Edward K. Vizy, Cornell University Introduction When the Gulf of Guinea.