Lockout/Tagout (The Control of Hazardous Energy)

3 When is LO/TO Required? When someone will be servicing or repairing machinery or equipment AND The unexpected machinery start-up or release of stored energy could cause injury “In many fatalities or injuries, another employee will start up a machine or open a valve, not aware that someone else is repairing the machine. The person working on this saw obviously would not want someone inadvertently starting up the saw.”

5 What is Hazardous Energy?
Electricity – live or stored Moving machinery parts “Stored mechanical movement means some part of a machine can be moved by electricity, hydraulic fluid, air pressure, water pressure or gravity. This energy can sometimes still exist or be stored when the machinery is turned off. For example, hydraulic fluids can move machinery parts even when the motor or electricity is off, if a certain valve is opened. In the truck photo, the upraised truck bed has hazardous stored energy because gravity could move it down on top of a mechanic working under it, if the bed is not physically blocked in the up position.” Stored mechanical movement in machinery

6 What is Hazardous Energy?
Stored heat (steam lines or hot liquids) Chemicals in pipelines under pressure or force of gravity Any other active or stored energy sources that could harm a worker “Chemicals may not seem like stored energy in the normal meaning of the word, but some chemicals like acids, would cause injury if suddenly sprayed or splashed on a worker, thinking a pipeline is empty, disconnects a pipe or opens a valve.”

7 Hazardous Energy Source Examples
Live electrical lines Electrical capacitors Lasers Engines that move machinery parts Hydraulic lifts Pneumatic (air pressure) lines Springs “Other examples include forklifts with the forks in the up position, steam and hot liquid pipes, fuel lines such as natural gas to heaters. These examples are considered hazardous, because just “turning them off” does not guarantee they won’t accidentally be turned on again during maintenance or repair, or they continue to have stored energy after being “turned off”. Think of a compressed spring, or a pressured line that has not been bled off.”

8 Service and Maintenance
Adjusting Lubricating Set-up (Preparing for normal function) Service/Repair “Service & Maintenance -- when the machine isn’t being used for actual production and service, repair or maintenance work is being done. Setup - a particular type of service to a machine when it is being prepared for production use. In the photo, the setup person is installing and adjusting the dies for production stamping of a composite material. Problems: There is no block under the upper die to positively prevent it from coming down. A key in the computer control on the other side of the machine is all that prevents machine activation.” These activities often require a worker to place all or part of his body into the machine’s hazard zone.

9 What is a Lockout Device?
A device that: Prevents a machine from being started up or turned on Prevents a machinery part from moving Prevents electrical energizing Blocks a pipeline, steam line or air line “A lockout device is a usually a lock, key, valve or switch cover that holds an energy isolating or control device in the off or safe position until the lockout device is removed. Lockout must be done according to an established procedure.”

10 Electrical Lockout Devices
“If you don’t have an electrical disconnect next to a machine, then you can attach a lock to the electrical panel. There are also individual circuit breaker locks, which may be better than locking the electrical panel cover since in an emergency, it may be necessary to get to the panel to shut off breakers other than the one that is locked out. You don’t have to have a lockout procedure for a machine with all its energy controlled by pulling the plug if the worker maintains exclusive control of the plug. If that is not the case, the photo on the right shows how to lockout a plug at the end of an electrical cord.” Locked out circuit breaker Locked out electrical panel

12 Fluid & Gas Lockout Devices
“These lockout devices prevent the valves in air, water, gas or steam lines from being opened.”

13 Pipe Lockout Examples “A physical block or break in a pipeline prevents steam, gas or liquids from flowing through the pipe to the area where maintenance work is being done. For example, the pipe to a chemical tank must be blocked or disconnected before someone goes in to do repair or maintenance.”

15 Group Lockout Devices Used when more than one person doing maintenance or repair on same machine or equipment Machinery or equipment can not be started up until all locks are removed Each person places and removes their own lock “Group or “gang” locks are typically used when several people are doing maintenance and repair at the same time on a machine or piece of equipment. Each lock should have a clear identification (usually a name) showing who it belongs to. No one can remove another person’s lock.”

17 Is This Adequate? “This obviously not a real lockout device since it could be easily removed.” 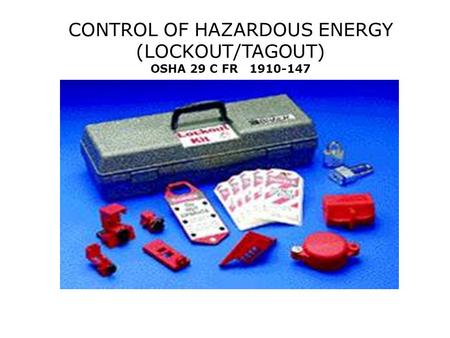 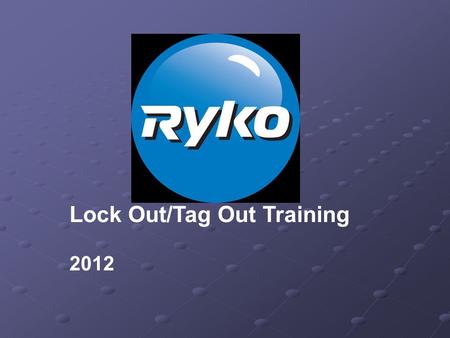 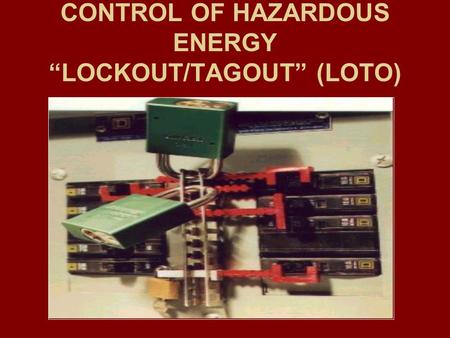 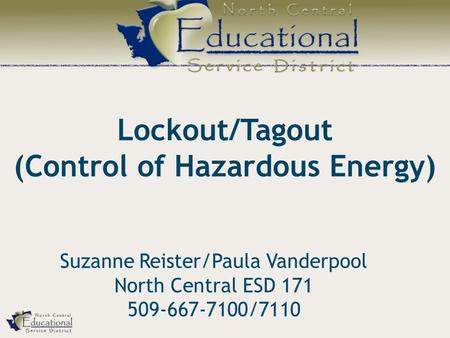 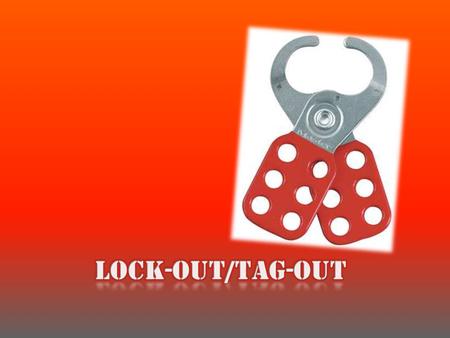 Introduction Most accidents are caused by the uncontrolled release of hazardous energy. Many of these accidents can be prevented by proper lock-out/tag-out. 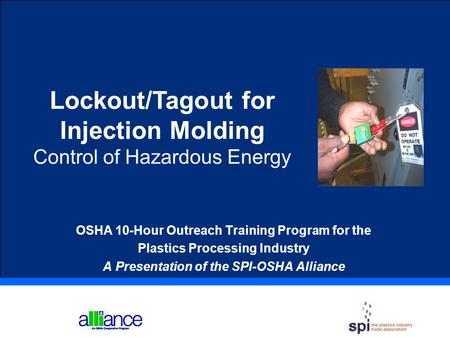 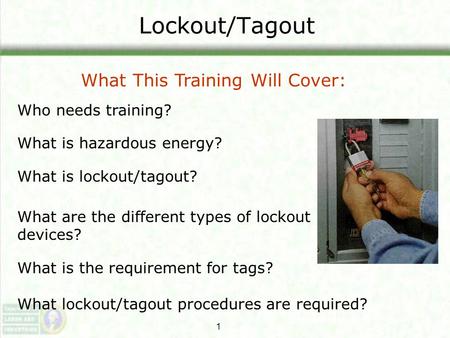 Lockout/Tagout What This Training Will Cover: Who needs training? 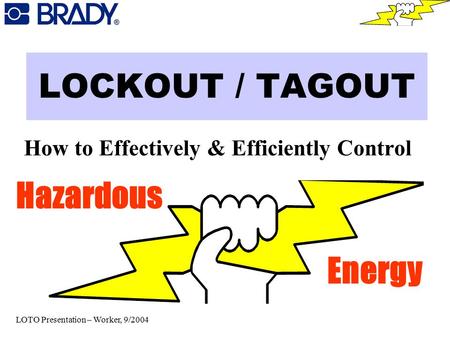 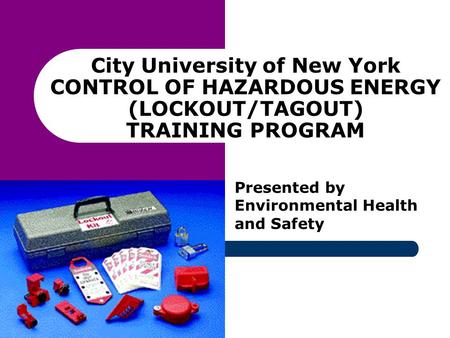 Presented by Environmental Health and Safety 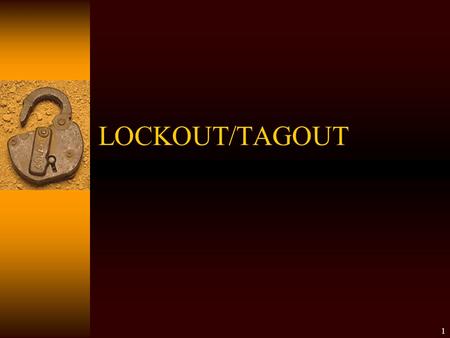 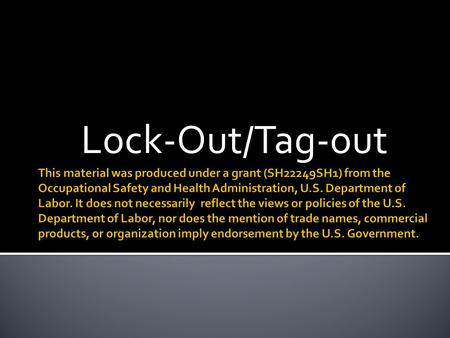 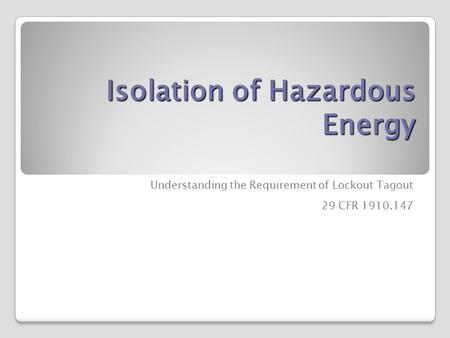 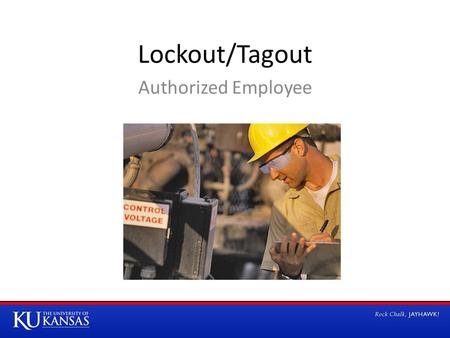 Lockout/Tagout Authorized Employee. What Is Hazardous Energy? –Often invisible –Can be hydraulic or mechanical –Live or stored –Moving machine or equipment. 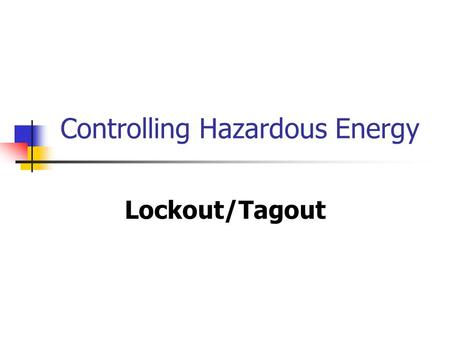 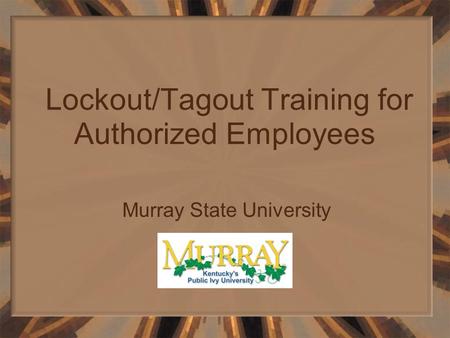 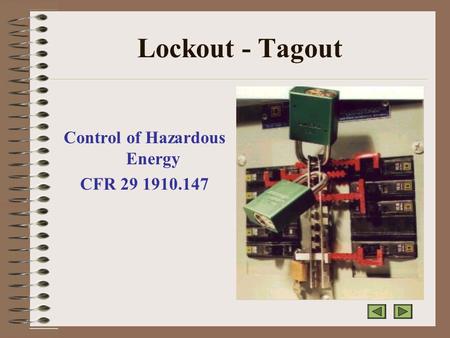 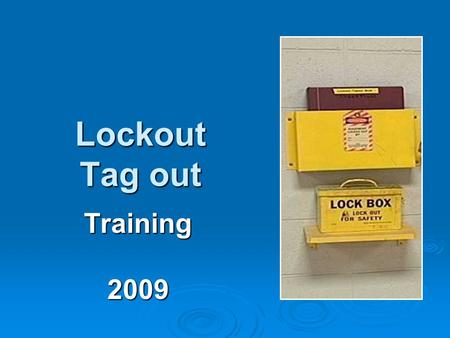 Lockout Tag out Training2009. Control of Hazardous Energy Policy Personal locks & keys will be issued to employees by their Safety/Training Coordinator. 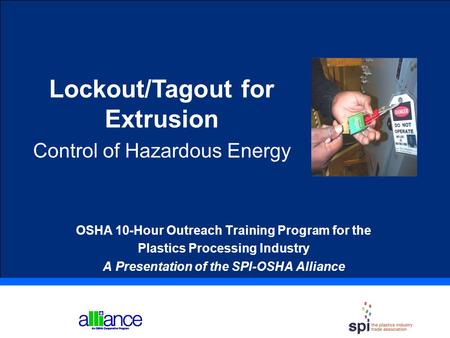 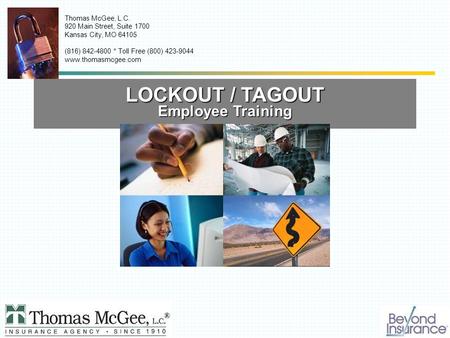 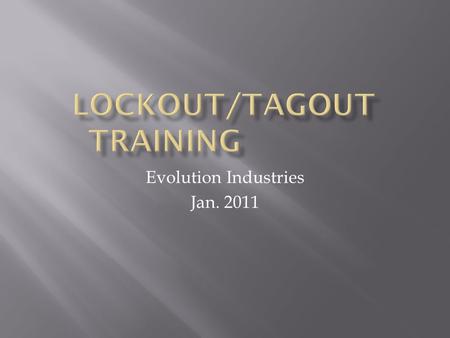 Evolution Industries Jan A Lockout/Tagout (LOTO) program ensures that energized equipment or machines are not started or used while they are being.