3 Formation: What is required? Warm & moist air –Reason why formation is in tropics: a lot of latent heat! –SSTs generally > 26.5  C Rotation –Comes from Coriolis force –Formation not on equator, but near Continued fuel –A tropical storm or hurricane can strengthen if it continues to move over warm water but will weaken once it hits dry land No (or very weak) vertical wind shear –Unlike storms in the mid-latitudes which need shear to organize, tropical storms will be sheared apart and prevented from organizing

4 Formation In order for a mass of unorganized t-storms to develop into a hurricane, the surface winds must converge somehow –Easterly waves that form over Africa Most hurricanes can be traced to this location of origination Has been found that during wetter years for Africa, more waves grow into hurricanes –ITCZ convergence creates low pressure regions of circulation –Convergence may occur along a pre-existing atmospheric disturbance like a front that has moved to the tropics from mid-latitudes

5 Formation Theories Energy for hurricanes is the direct transfer of sensible and latent heat from warm ocean water into the atmosphere Organized Convection Theory –Storm will strengthen as long as divergence aloft is quicker than convergence towards the center at the surface –Main fuel is temperature of water and release of latent heat Heat Engine Theory –Heat is taken in at a higher temp, converted to work, and is then released at a lower temperature

10 Eye: area of broken clouds and light winds in the center of the hurricane –Coriolis deflects converging winds around the center –Convection in eye wall warms the air due to LH release Produces slightly higher pressures aloft which initiates downward motion within eye Eye wall: ring of intense thunderstorms adjacent to the eye –Location of heaviest rains and strongest winds Spiral rain bands: clouds align themselves into spiraling bands that swirl towards the center Aircraft flying inside the eye

15 Movement Easterly winds steer N. Pacific and N. Atlantic hurricanes –Gradually they swing poleward around the subtropical high and become caught in westerly flow This drives them to the north or northeast However, the actual path of a hurricane varies A hurricane moving northward over Atlantic will survive longer than its counterpart (a typhoon) in the eastern pacific –Atlantic water is warmer

16 Winds When a hurricane is approaching from the east, its highest winds are usually on its north Why? –Winds that push the storm along add to the winds on the north side and subtract from the winds on the south side These high winds also generate large waves - storm surge

17 Storm Surge Storm surge has historically brought 90% of the death and destruction during hurricanes, and is the primary reason that coastal areas are evacuated as storms approach Winds push water onshore - can add to normal tides and create waves over 10 feet Strongest where storm motion and winds are in the same direction (on the right side)‏ Gradually sloped coastlines are inundated by surge waters moving onshore, though steeper coastlines will cause breaking waves

18 Dissipation Since the main driver of hurricanes is warm ocean water, if the hurricane moves over colder water, then the storm will dissipate Therefore, a hurricane that makes landfall will begin to dissipate –May cause flooding once they move over land

25 Naming Hurricanes Starting in 1979, hurricane names began alternating between female and male names –Use English, Spanish, and French names too Once a storm has caused great damage and it becomes infamous as a Category 3 or higher, its name is retired for at least 10 years 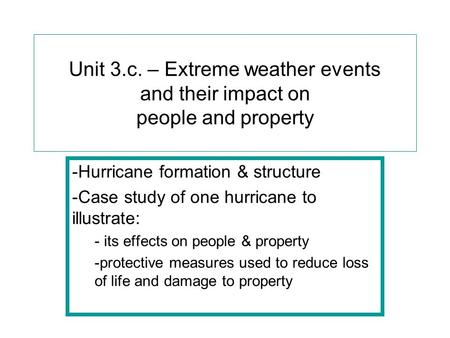 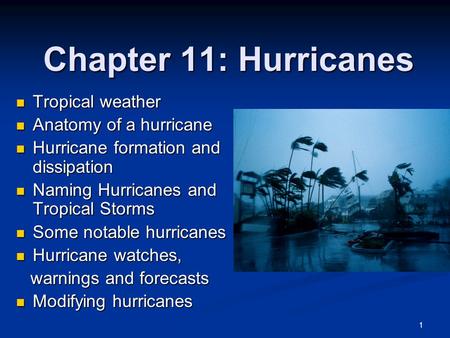 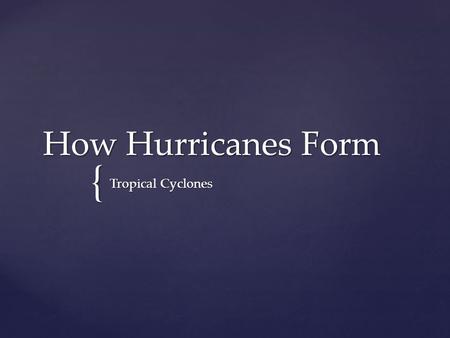 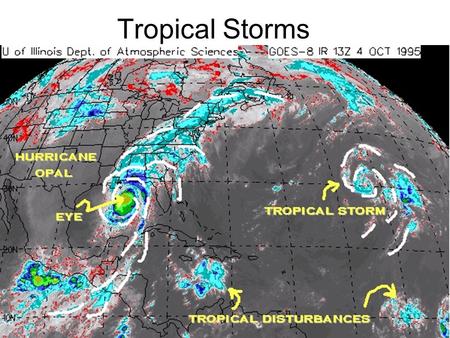 Tropical Storms. Tropical Cyclone Tropical cyclones are large, rotating, low- pressure storms that form over water during summer and fall in the tropics. 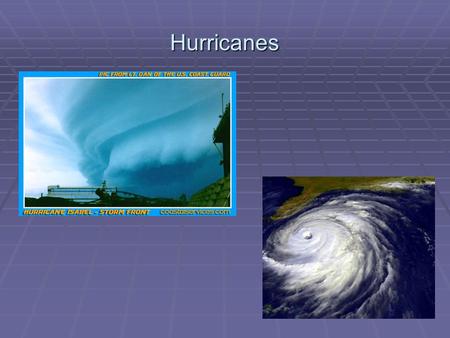 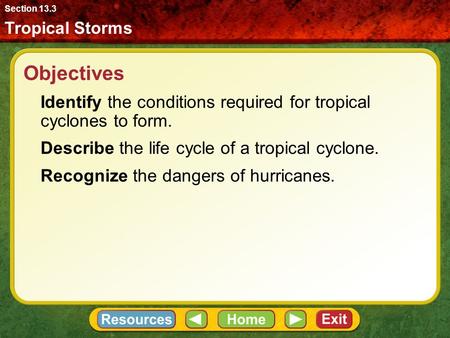 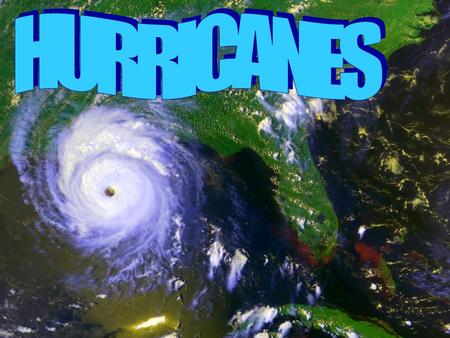 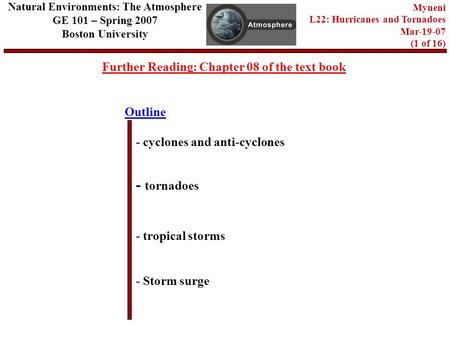 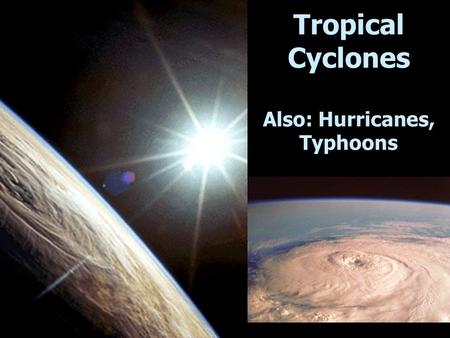 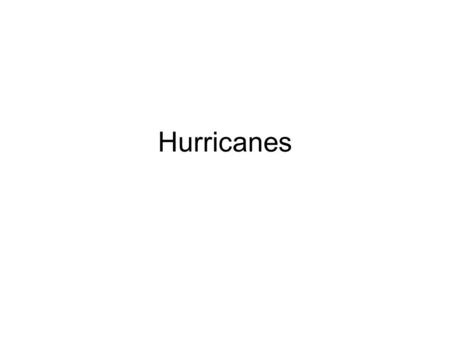 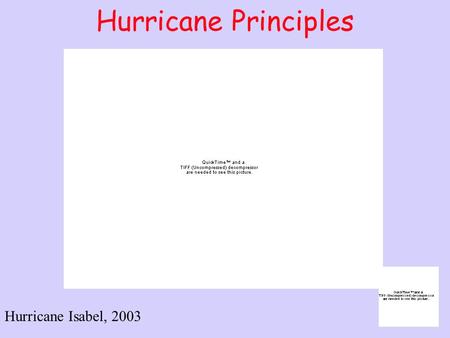 Hurricane Principles Hurricane Isabel, Outline Definitions Formation and Conditions Needed Growth and Structure of a Hurricane Where do They Form? 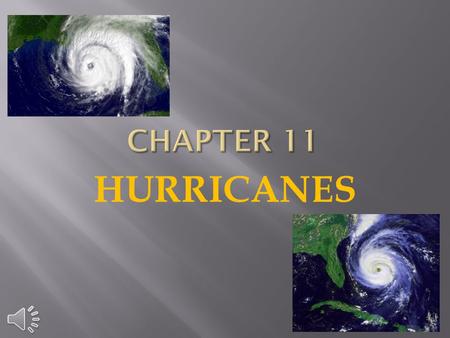 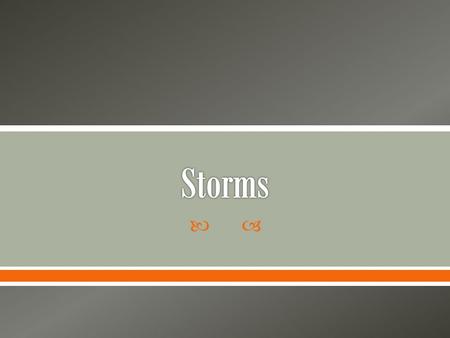