2 Taxpayer Filing Requirements
Corporations: all must file regardless of taxable income Estates and Trusts: required to file if gross income exceeds $600 Individuals: filing is determined by taxpayer’s filing status, age, and gross income

4 Tax Return Due Date Individuals: 15th day of 4th month following end of tax year. Usually April 15th because individuals are usually on a calendar year. Corporations: 15th day of the 3rd month following end of tax year. Due dates on a Saturday, Sunday, or holiday are extended to next business day Individuals and corporations are allowed to apply for an automatic 6 month extensions

6 Statute of Limitations
Often tax returns are filed with incorrect amounts reported either in the taxpayer’s favor or the government’s favor. Statute of limitations: the time in which the taxpayer can file an amended return or the IRS can assess a tax deficiency. Generally ends 3 years from the later of (1) the date the tax return was actually filed, or (2) the tax return’s original due date.

18 Statutory Authorities
U.S. Constitution The 16th Amendment provides Congress the ability to tax income directly, from whatever source derived, without apportionment across the states Tax Treaties agreements negotiated between countries that describe the tax treatment of entities subject to tax in both countries

22 Judicial Sources: The Courts
Trial Level Courts: 3 trial level courts US District Court US Court of Federal Claims US Tax Court All courts apply the judicial doctrine of stare decisis, which means that a court will rule consistently with its previous rulings and the rulings of higher courts with appellate jurisdiction. The Tax Court applies the Golsen rule.

24 Administrative Sources: The US Treasury
Revenue Rulings: Less authoritative weight, but they provide a much more detailed interpretation of the Code (e.g., application to a specific factual situation) Revenue Procedures: Explain in great detail IRS practice and procedures in administering tax law Letter Rulings: Less authoritative but more specific than revenue rulings and regulations (e.g., applied to a specific taxpayer)

30 Tax Professional Responsibilities
Tax professionals are subject to various statutes, rules and codes of conduct: AICPA Code of Professional Conduct AICPA Statement on Standards for Tax Services IRS’ Circular 230 State Board of Accountancy Statutes Failure to comply with statutes can result in being admonished, suspended, or barred from practicing

31 Taxpayer and Tax Practitioner Penalties
Civil Penalties: most common type of penalties Generally in monetary penalties Imposed when tax practitioners or taxpayers violate tax statutes without reasonable cause Criminal Penalties: much less common than civil penalties Penalties are much higher and can include prison sentences

32 Taxpayer and Tax Practitioner Penalties
A taxpayer and tax practitioner will not be subject to an underpayment penalty if: there is substantial authority that supports the tax return position or if there is a reasonable basis for the position and it is disclosed on the taxpayer’s tax return 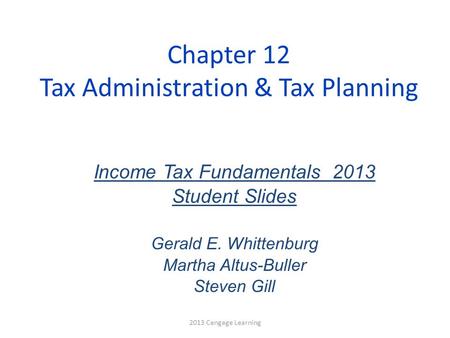 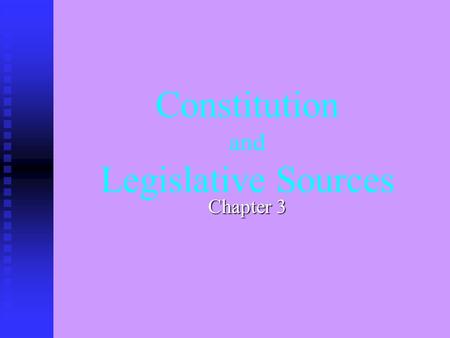 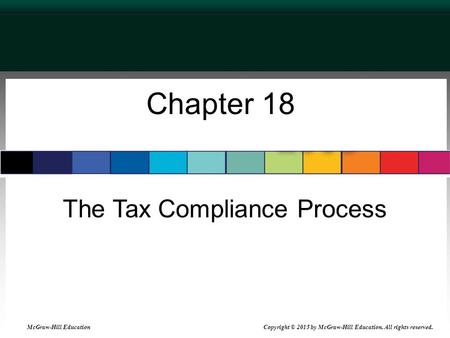 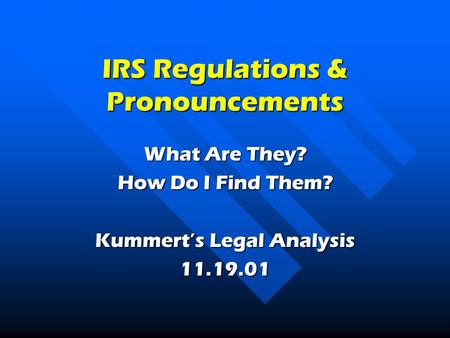 IRS Regulations & Pronouncements What Are They? How Do I Find Them? Kummert’s Legal Analysis 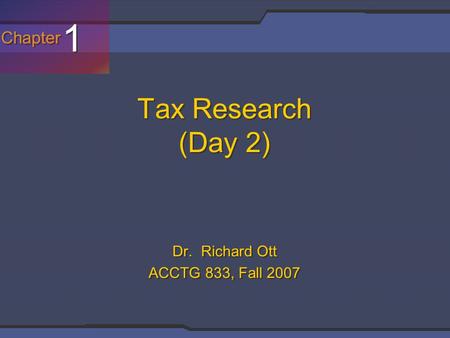 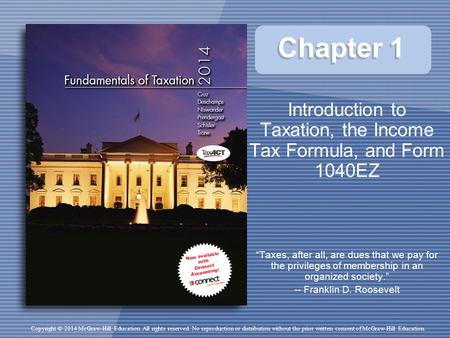 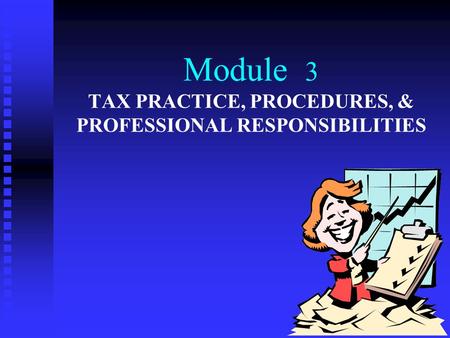 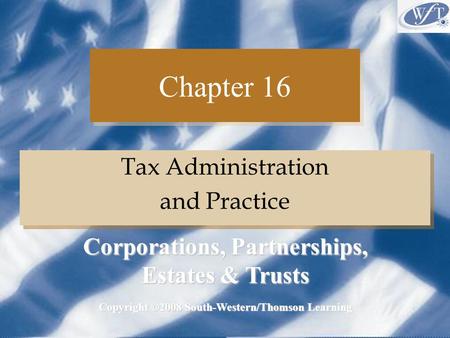 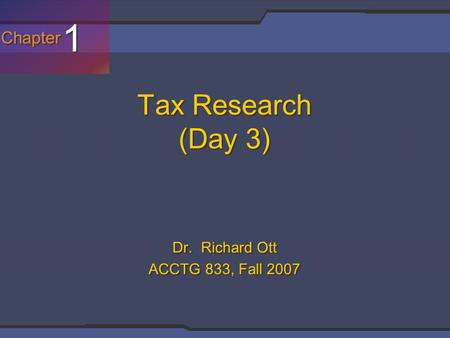 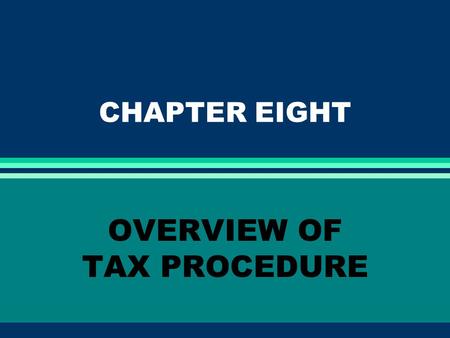 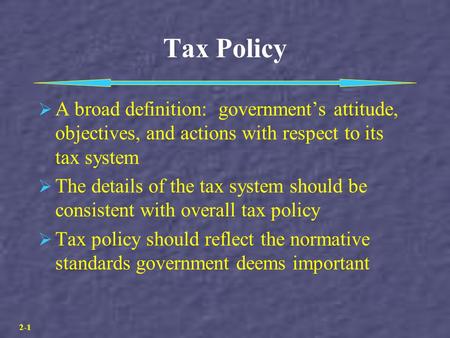 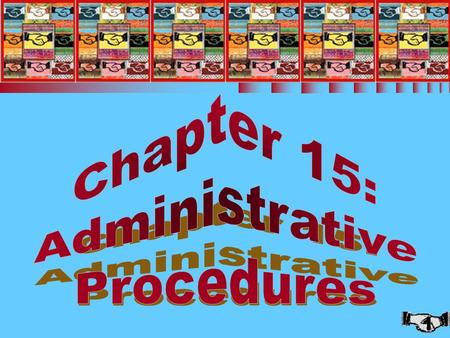 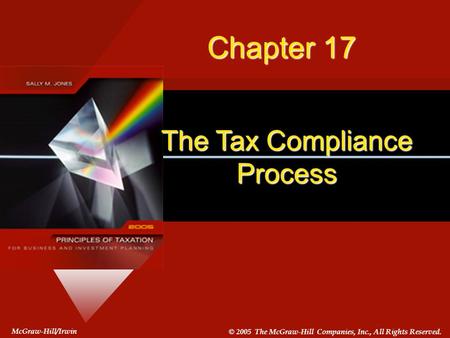 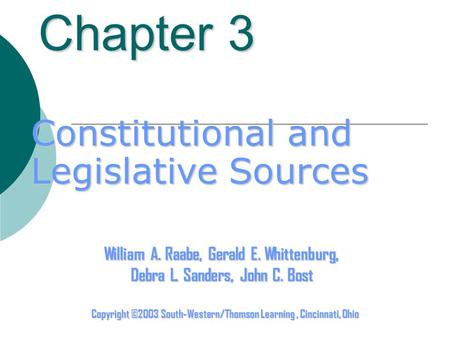 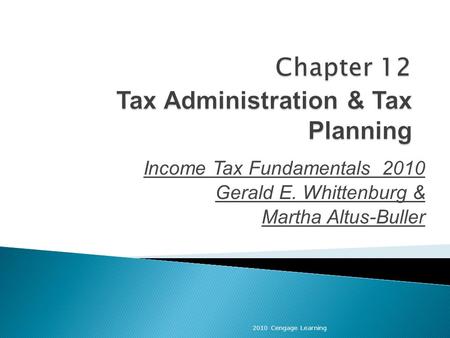 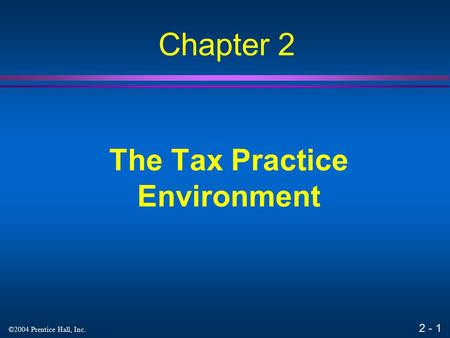 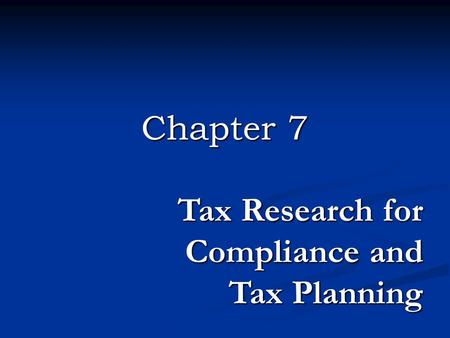 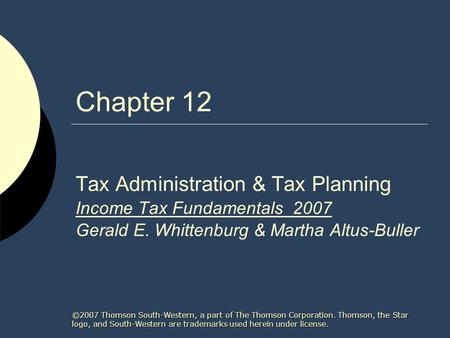 ©2007 Thomson South-Western, a part of The Thomson Corporation. Thomson, the Star logo, and South-Western are trademarks used herein under license. Chapter. 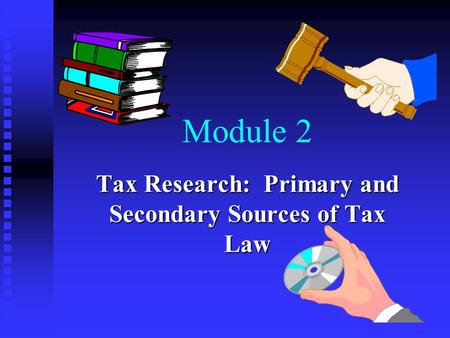