2 What are settlement patterns?
The arrangement of where people live on earth or in a country and the factors that influence this arrangement

4 what is population distribution?
It is a pattern showing where people live in an area

5 Canada’s Population distribution
Canada’s population is not evenly dispersed throughout the country More than 90% of people live within 600km of the U.S border, the remaining 10% are spread sporadically throughout the rest of Canada

23 Patterns of rural settlement
Patterns of Rural Settlement are affected by 3 key factors: Kind of resources found in the area Transportation methods available at time of settlement Role played by governmental policy

24 Governmental Policy In some areas, settlement occurred with little to no government input In others, the government carefully planned how, where, and when settlement would occur

25 Survey System Survey System: Set of rules controlling how, where, and when settlement would occur. Government controlled things such as: The land that would be settled The size and shape of farms The patterns of roads that would be built The location of town sites, schools and churches

27 Long Lots of southern Québec
Area settled long before development of railways, roads, and survey system Long, thin farms built along St. Lawrence River and its tributaries After all river lots taken, a second, third, and fourth row of long lots were settled

28 DID YOU KNOW? In early Quebec, taxes were based on the amount of river frontage, so it was desirable to have as narrow a lot as possible Can you think of any disadvantages to this?

29 Concession system of ontario
Settled after a survey system was in place Strips of land, called concessions, were divided up in a grid. Properties tended to be rectangular Concession roads were built parallel to waterway, and side roads were perpendicular Each concession was divided into farms, called lots Groupings of concession blocks were called townships and groups of townships were called counties

31 Section system of the southern prairies
• Huge, square farms, with farmhouses scattered far and wide • Land divided into 36 sections and each section divided into 4 quadrants • A family would get one quadrant – approx. 64ha in size

34 Service based settlements
Some people settled in isolated areas because they can earn a living by providing services to residents and to travelers passing through. Often these settlements would be scattered along major roads. Often based on transportation ex. people who live along the Trans-Canada Highway in Northern Ontario Can include gas stations, motels, post office and restaurants 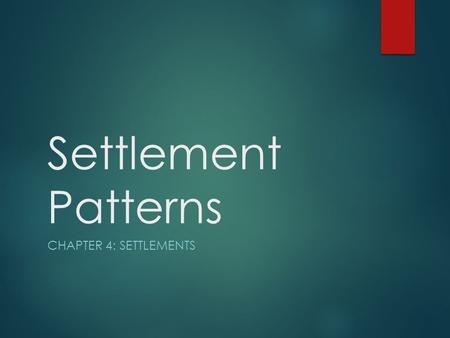 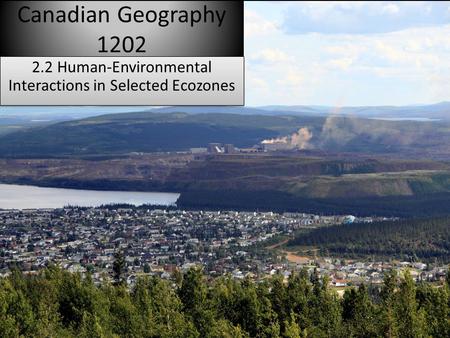