2 How did Clovis increase the power of the Frankish kingdoms? He became a Christian and gained the alliance of the Roman Catholic Church. He ruled the new lands according to Frankish custom but also preserved much of the Roman legacy in Gaul.

3 What steps did Charlemagne take to improve government and unify his empire? What happened to his empire after he died? Charlemagne spread Christianity to the conquered peoples of his empire, appointed powerful nobles to rule local regions, and sent out missi dominici to check on roads, listen to grievances, and see that justice was done. Charlemagne’s empire fell apart after he died.

5 Describe three features of feudal society. Everyone had duties to each other. Nobles had responsibilities to both lords and vassals. Lords granted vassals a fief (land) or estate. Lords promised to protect the vassal. Serfs were tied to the land.

6 What obligations did lords and vassals have under the feudal system? How did the code of chivalry affect medieval ideas about women? The lord promised protection for his vassals. The vassals pledged loyalty and 40 days a year of military service, money payments, and advice. The code of chivalry raised women to a new status because it called for women to be protected and cherished.

9 Describe three ways in which the Church helped shape medieval life. How did monks and nuns help build Christian civilization in Europe? The church administered the sacraments, offered spiritual guidance, and provided care for the needy. Daily life revolved around the Christian calendar. Monks and nuns emphasized the value of hard work; preserved knowledge by copying and storing important texts; provided basic social services by tending the sick, helping the poor, setting up schools for children, and caring for travelers.

10 How did the Church increase its secular power? Feudal rulers often appointed Church officials to high government positions. The Church tried to end feudal warfare by declaring periods of truce.

11 What reforms did Francis and Dominic promote? Francis preached living a life of poverty, humility, and love of God. Dominic tried to combat heresy by preaching official Catholic beliefs.

12 Why were Jewish communities able to flourish in Spain? The Muslims who controlled Spain tolerated both Jews and Christians. Muslim Spain became a center of Jewish culture and scholarship. Some Jews even served in Muslim royal courts.

13 What views did the Church put forth about women? The Church taught that men and women were equal before God. However, the church also considered women to be weak and needful of guidance and protection.

14 What were two effects of the agricultural revolution that took place during the Middle Ages? Farmers were able to produce more food. As a result of this, the population grew.

16 How did a merchant’s guild differ from a craft guild? How did guilds improve life for townspeople? Merchant guilds passed laws, levied taxes, and made decisions about how to spend funds. Each craft guild represented workers in one occupation. Members protected their economic interests by limiting membership, establishing quality control, regulating hours of labor, and setting prices. Guilds provided schools, hospitals, and support for their members and widows/orphans. 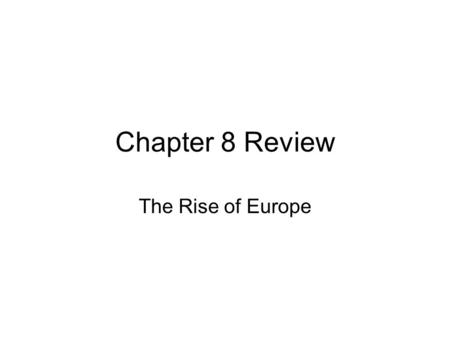 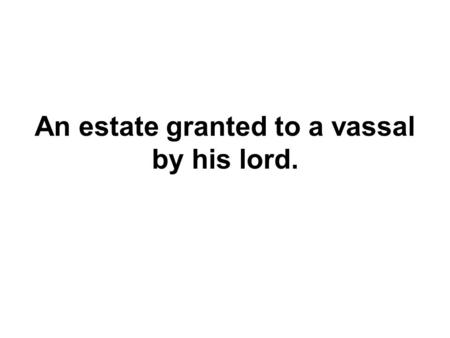 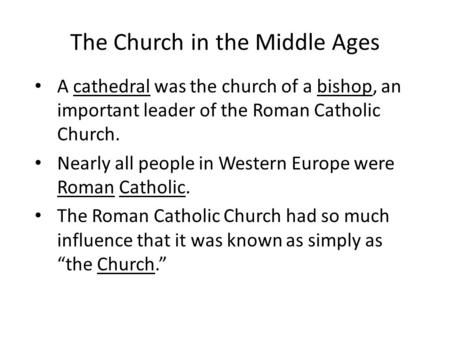