2 Chinua Achebe: Background Information Born Albert Chinualumogu Achebe in 1930 Grew up in Nigeria, one of the first centers of Christian missionary work Writes about the breakdown of traditional African Culture in the face of European Colonization in the 1800s Sought to educate his fellow Nigerians about their culture and traditions

3 Background (continued) Achebe was raised as a devout Christian. His father was a teacher in a missionary school. Achebe recalls that his family called themselves “the people of the church” and thought of non-Christians – including Achebe’s uncle, who still practiced traditional religion – as “heathen” or “the people of nothing.” Achebe later rejected this thought, along with his European name “Albert.”

4 Author’s Purpose His first novel, Things Fall Apart, depicts the confrontation between the Igbo people of Southeast Nigeria and the British who came to colonize them. Achebe tells the story from an African point of view, showing that the Igbo were not "savages” needing to be civilized, as the European conquerors believed, but intelligent human beings with a stable, ordered society and rich tradition.

6 Achebe’s Style Achebe blends a formal European style of writing (the novel) with African story-telling. He influenced other African writers and pioneered a new literary style using traditional idioms, folk tales, and proverbs. Achebe is a “social novelist.” He believes in the power of literature to create social change.

7 Historical Context: Tribal Society The story takes place in the tribal village of Umoufia in the late 1880’s, prior to English colonization. The Igbo people worship many gods who are represented by priests and priestesses within the tribe. Each individual has a personal god, or chi, that directs his actions. The Igbo are a hunting and gathering society, with yams as the primary crop.

8 Historical Context: The Spread of Christianity Christianity took its strongest hold in Africa when the majority of the missionaries arrived in the late 1800’s. Missionaries provided education and attempted to convert tribes from their “heathanistic” beliefs. Africans were distrustful of European Christians at first, but many eventually converted. As more members adopted European values, the clans divided and conflicts arose.

9 Historical Context: British Colonization The divisions split ethnic groups, which led to tension and sometimes violence. British colonial rule in Nigeria lasted from 1903 to 1960. On October 1, 1960, Nigeria was granted status as a sovereign state and member of the British Commonwealth, but was still under the rule of the British monarchy. In 1963, a new constitution replaced the British monarch with a Nigerian president.

10 Compare & Contrast 1800’s- religion varies, but most Africans share some common beliefs and practices Colonial Africa- Missionaries arrive and introduce Christianity; many tribesmen convert Today-more than 25% of Africa is Christian, but traditional African religion is still practiced, as well as Islam

11 Compare & Contrast 1800’s- Africans have their own identities and cultures; there is little interest in participating in the modern world Colonial Africa- African children are taught European history so they can compete in the modern world; their own heritage is ignored Today-There is a renewed interest in cultural heritage, and traditional customs are being taught to African children

12 Major Characters Unoka- Okonkwo’s father and the root of all his fears and problems; represents all the characteristics the Ibo abhor (gentleness, lack of ambition, sensitivity to people & nature) Okonkwo- “the roaring flame”- Strong, proud and driven; despises anything he regards as weakness; his strengths become his weakness and lead to his ultimate downfall

14 Major Characters (continued) Nwoye- Okonkwo’s son; disappoints him by showing signs of his grandfather’s sensitivity and laziness Ikemefuna-comes to live with Okonkwo’s family as a peace offering from another tribe; fills the void in Okonkwo’s life that his own son cannot Obierika- Okonkwo’s best friend, more of a thinking man 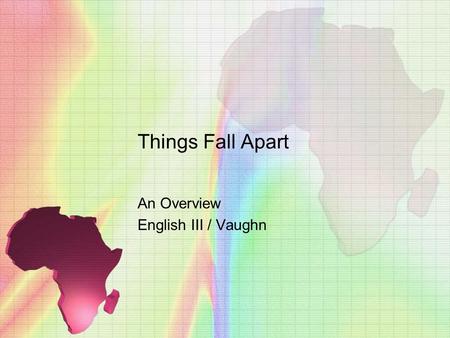 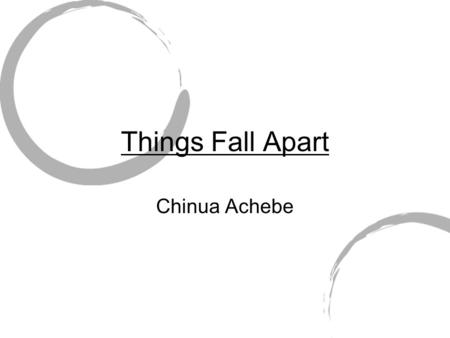 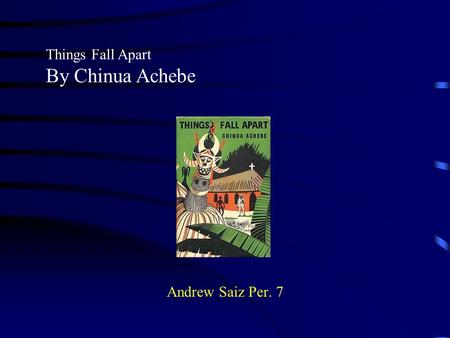