2 The Open Economy Two aspects of the interdependence of the world economies: international trade in goods and services; worldwide integration of financial markets.

3 Nominal Exchange Rates
If someone in one country wants to buy goods, services, or assets from someone in another country, normally she will first have to exchange her currency for that of her trading partner’s country.

4 Nominal Exchange Rates (continued)
The nominal exchange rate, or exchange rate, between two currencies, enom, is the number of units of foreign currency which can be purchased with a unit of the domestic currency.

7 Exchange Rate Systems (continued)
In a fixed-exchange-rate system exchange rates are set at officially determined levels. The official rates are maintained by the commitment of nations’ central banks to buy and sell their own currencies at the fixed exchange rate.

8 Real Exchange Rate The real exchange rate is the number of foreign goods someone gets in exchange for one domestic good. Real exchange rates are based on price indexes of “baskets” of goods. We assume that each country produces a single good.

15 Purchasing Power Parity (continued)
After re-arranging So, relative PPP is

17 How Exchange Rates are Determined
The nominal exchange rate enom is the value of a currency, say the dollar. The value of the dollar is determined by supply and demand in the foreign exchange market.

20 Supply of Dollars Reasons to supply dollars (national currency):
to be able to buy foreign goods; to be able to buy real and financial assets in foreign countries. The supply curve is upward sloping.

21 Effects of Changes in Output (Income)
When domestic output (income) rises the demand for imports increases and net exports must fall. The domestic currency depreciates, the exchange rate falls.

23 Effects of Changes in Real Interest Rate
If the domestic country’s real interest rate rises, other factors held constant, the country’s real and financial assets are more attractive for investment. The demand for domestic currency increases and the exchange rate appreciates (enom rises).

25 Returns on Domestic and Foreign Assets
In an open economy, savers have an opportunity to buy financial assets sold by foreign borrowers as well as those sold by domestic borrowers.

26 Returns on Domestic and Foreign Assets (continued)
Investment decisions depend on: nominal interest rates; expected changes to the exchange rate.

27 Returns on Domestic and Foreign Assets (continued)
The gross nominal rate of return on a foreign bond (10.4) efnom is the expected future value of enom.

31 Interest Rate Parity (continued)
The real interest rate parity condition is: For e = ef the condition is r = rFor , which is the assumption in what follows.

36 The Open-Economy IS Curve (continued)
Suppose that output rises: Sd increases, Sd > Id, the S-I curve shifts to the right; import rises, NX falls, and the NX curve shifts to the left; the equilibrium is restored with lower r; the IS curve slopes downward.

41 The Transmission of Business Cycles
The impact of foreign economic conditions on the real exchange rate and net exports is one of the principal ways by which cycles are transmitted internationally. A decline in US output shifts the Canadian IS curve down.

42 Macroeconomic Policy with Flexible Exchange Rates
An economy is small. The exchange rate does not change, that is r = rFor. This is known as Mundell-Fleming model.

43 A Fiscal Expansion and the Flexible Exchange Rate
An increase in G crowds out NX: shifts the IS curve to the right; r is above rFor, the demand for Canadian financial assets increases; the e increases and the NX falls; the IS curve shifts to the left where r=rFor; no change in Y and P.

45 A Monetary Expansion and the Flexible Exchange Rate
An increase in M: shifts the LM curve to the right; r is below rFor, the demand for Canadian financial assets decreases; the e decreases and the NX rises; the IS curve shifts to the right where r=rFor.

51 Overvalued Exchange Rate
In a situation of an overvalued exchange rate a government can: devalue its nominal fixed exchange rate; restrict international transactions; buy back its currency in foreign exchange market.

52 Overvalued Exchange Rate (continued)
To support the domestic currency the central bank must use the reserves that correspond to the country’s balance of payment deficit. It cannot do that forever because the amount of reserves is limited.

56 How to Support an Overvalued Currency
To support an overvalued currency a country could: impose strong restrictions on international trade and finance; devalue its currency; make a policy change to raise the fundamental value of the exchange rate (use monetary policy).

63 A Fiscal Policy and the Fixed Exchange Rate
An increase in G: shifts the IS curve to the right, r is above rFor; the exchange rate is undervalued; the monetary expansion accommodates the fiscal expansion, LM shifts to the right where r = rFor.

65 A Fiscal Policy (continued)
enom, P and PFor are fixed in the short run and under the fixed exchange rate, e is fixed. In the long run P increases, e increases, NX fall. Eventually NX have been crowded out by the fiscal expansion.

66 A Fiscal Policy (continued)
In the classical model P and e increase immediately in response to the fiscal expansion and NX is immediately crowded out. Under the fixed exchange rate fiscal policy is an effective tool for adjusting domestic output in the Keynesian short run.

67 Fixed versus Flexible Exchange Rates
Benefits of fixed-exchange-rate systems: less costly trade in goods between countries, i.e. lower transaction cost; promoted monetary policy discipline. The downside is inability of a country to use its monetary policy to deal with recessions.

68 Open-Economy Trilemma
In selecting an exchange rate system a country can choose only two of the three features: a fixed exchange rate to promote trade; free international movement of capital; autonomy for domestic monetary policy.

69 Fixed Exchange Rate System
Fixed exchange rates are useful when used in a group of countries: large benefits can be gained from increased trade and integration; monetary policies can be coordinated closely.

70 Flexible Exchange Rates System
A flexible exchange rate system is useful if a country has specific macroeconomic shocks. Then they can be reduced with help of monetary policy.

71 Currency Unions A currency union is sharing of a common currency by a group of countries. A currency union reduces the cost of trading and prevents speculative attacks on currencies. However, monetary policies cannot be independent.

72 The Self-Correcting Small Economy
A small open economy has more sources of unexpected shocks. However, there also exist a correcting mechanism in addition to the price level – an exchange rate adjustment.

73 The Self-Correcting Small Economy (continued)
A fixed-exchange-rate system: neutralized both fiscal policy and the shocks to the IS curve; monetary policy and shocks to the LM curve have a magnified impact. 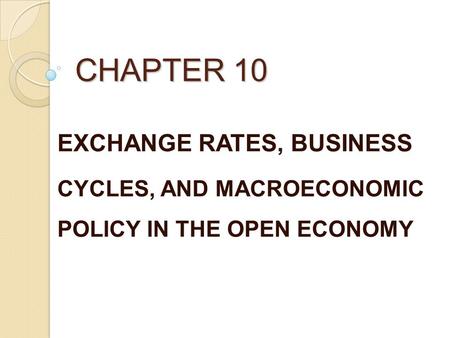 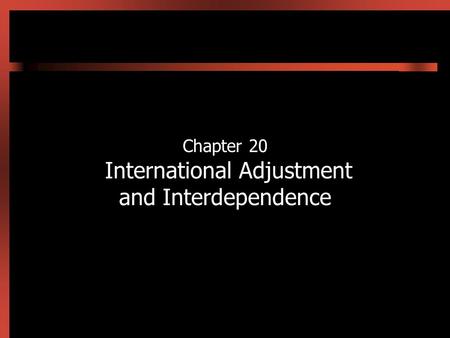 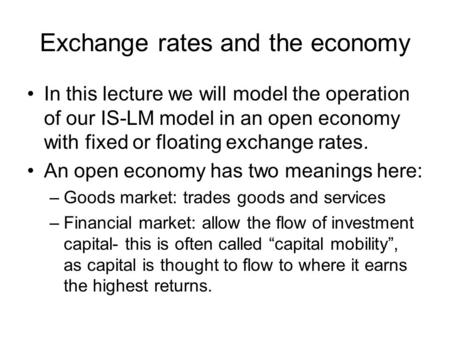 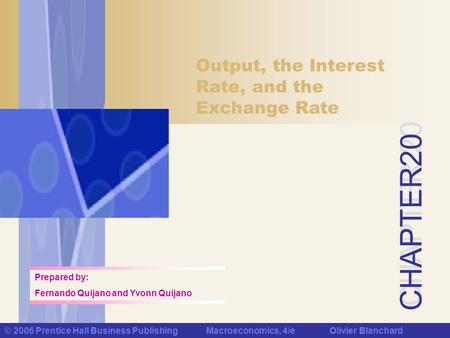 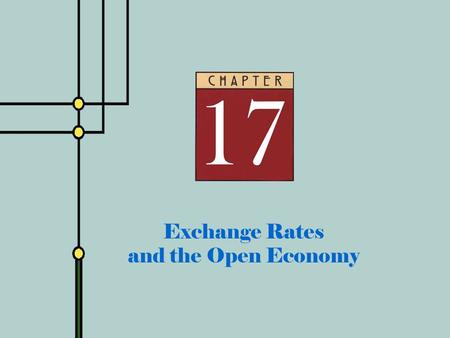