7 The greenhouse effect of Venus From geometry, we can calculate the average solar flux over the surface of Venus. It is approximately 661 W/m 2. Venus is very reflective of sunshine. In fact, it has a reflectivity (or albedo) of 0.8, so the planet absorbs approximately 661 X 0.2 = 132 W/m 2. By assuming that the incoming radiation equals the outgoing radiation (energy balance), we can convert this into an effective radiating temperature by invoking the Stefan-Boltzmann law (total energy =  T 4 ). We find that T=220K. But Venus’ surface has a temperature of 730K!!! The explanation for this huge discrepancy is the planet’s greenhouse effect.

8 The greenhouse effect of Earth From geometry, we can calculate the average solar flux over the surface of Earth. It is approximately 343 W/m 2. The earth has a much lower albedo than Venus (0.3), so the planet absorbs approximately 343 X 0.7 = 240 W/m 2. By assuming that the incoming radiation equals the outgoing radiation, we can convert this into an effective radiating temperature by invoking the Stefan-Boltzmann law (total energy =  T 4 ). We find that T=255K. Earth’s surface has a temperature of 288K While much smaller than Venus’ greenhouse effect, earth’s is crucial for the planet’s habitability. Without the greenhouse effect, the temperature today in Los Angeles would be about 0 degrees Fahrenheit.

9 Main Constituents of the Earth’s Atmosphere Nitrogen78% Oxygen21% Argon1% Water Vapor0-4% Carbon Dioxide0.036% (increasing) Nitrogen, Oxygen, and Argon hardly interact with radiation. On the other hand water vapor and carbon dioxide both interact with infrared radiation---the type emitted by the earth and its atmosphere.

10 Important Greenhouse Gases (concentrations in parts per million volume) water vapor0.1-40,000 carbon dioxide360 methane1.7 nitrous oxide0.3 ozone0.01 chlorofluorocarbons~0.0007 A greenhouse gas is defined as a gas that absorbs significantly the radiation emitted by the earth and its atmosphere.

11 CO 2 H2OH2O Why do certain gases interact with radiation? When radiation impinges on a molecule, it can excite the molecule, either by vibrating or rotating it. Molecules of a particular kind of gas have a different shape from molecules of another type of gas, and so are excited by radiation in different ways. CH 4

13 CO 2 H2OH2O Molecules with more than two atoms tend to absorb radiation more effectively than diatomic molecules such as N 2 and O 2. This is because the more atoms a molecule contains, the more ways it can vibrate and rotate. This is why diatomic nitrogen and oxygen are not greenhouse gases. CH 4 O2O2

14 The various forms of radiation are organized according to their wavelengths (and hence energy levels), creating the electromagnetic spectrum. Visible light

15 Interaction of the atmosphere with radiation

18 The greenhouse effect is a naturally- occurring phenomenon on the earth as it is on Venus. The enhancement of this effect by increasing greenhouse gases is the reason for concern about climate change. 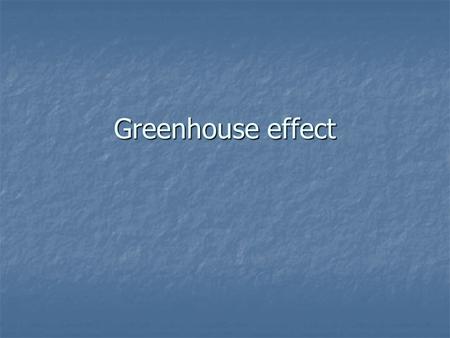 Greenhouse effect. Our climate system (atmosphere, lithosphere, hydrosphere and living things) trap and store energy and distribute it around the world. 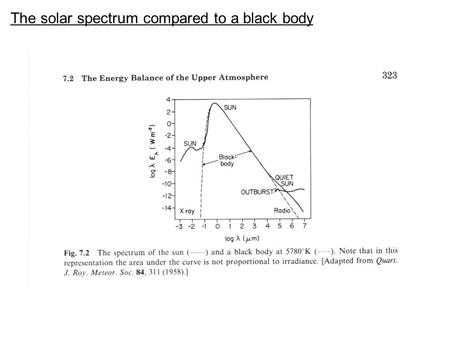 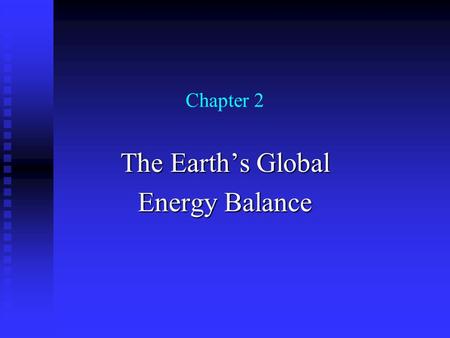 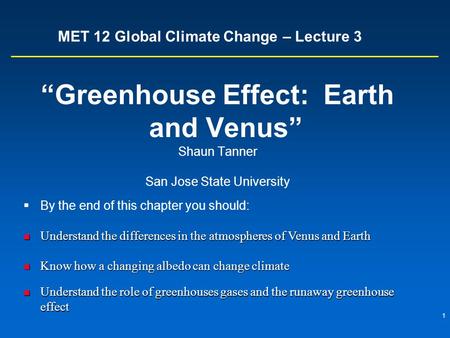 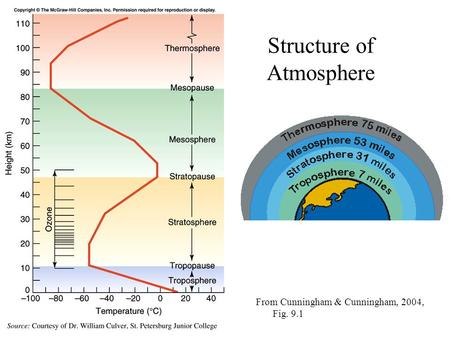 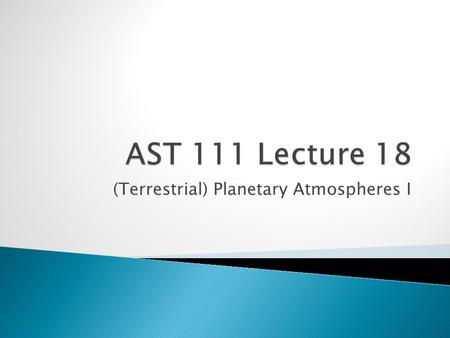 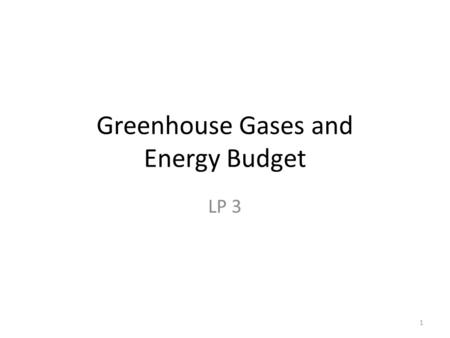 Greenhouse Gases and Energy Budget LP 3 1. What are the greenhouse gases? Where do they come from? How do they work? 2. 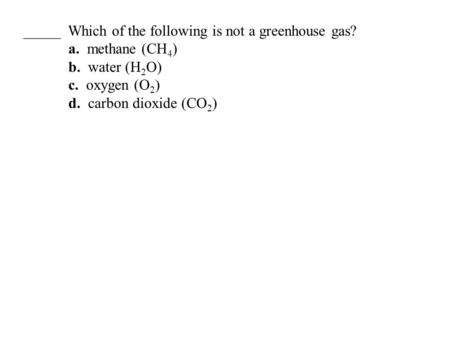 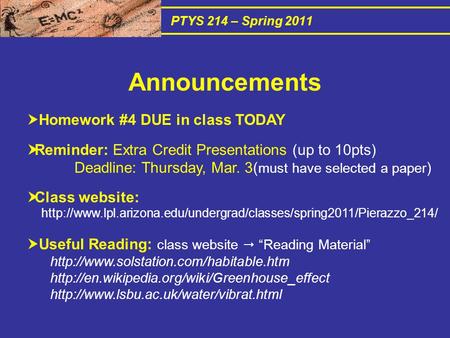 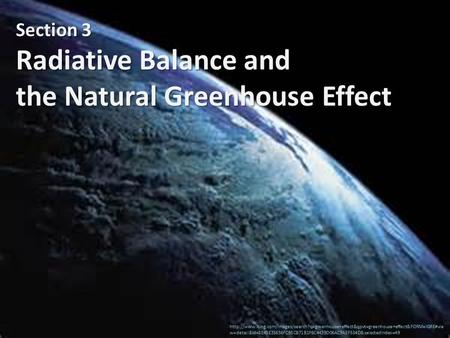 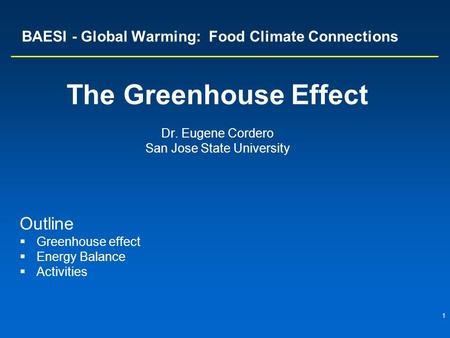 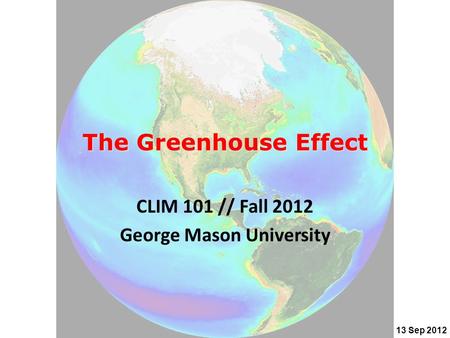 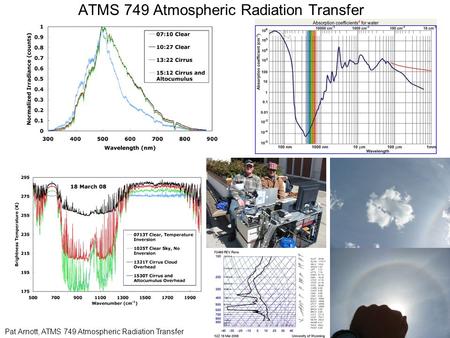 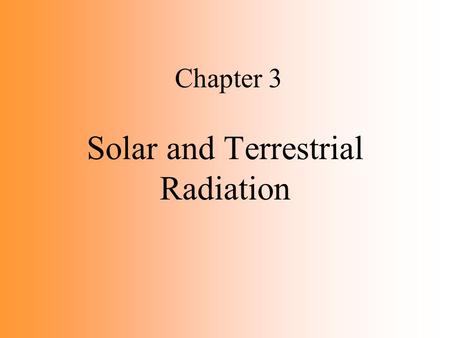