2 1 Purpose of the Report This is the second long-range assessment of the economy prepared by the McGuinty government Ontario’s Long-Term Report on the Economy: Informs and inspires public debate about the long-term issues facing Ontario Supports the public debate with reliable information and relevant analysis Advances the principles of transparency in decision-making and accountability with Ontarians.

3 2 Overview Ontario’s Long-Term Report on the Economy highlights the long-term challenges and opportunities the province faces over the next 20 years While Ontario is projected to see healthy population growth of 28 per cent to 2030, key challenges include aging and slowing growth in the working-age population: Seniors will account for 21.9 per cent of Ontario’s population by 2030, up from 13.7 per cent today – this is expected to increase demand for health care Working-age population (15–64) expected to increase by 13.5 per cent to 2030, about half the growth seen over the previous two decades Expanding productive capacity, increased tax competitiveness and global and domestic demand are expected to result in average real GDP growth of 2.6 per cent in Ontario from 2010 to 2030, comparable to the past, despite slower growth of working-age population.

7 6 Contribution of Natural Increase and Net Migration to Ontario’s Population Growth *Net Migration is the difference between the number of people entering and the number of people leaving the province both from other countries and other provinces. Immigration is the largest component. Sources: Statistics Canada, 1971–2009, and Ontario Ministry of Finance projections (Fall 2009). Number of People 2029–30 ProjectedHistorical Net Migration* Natural Increase

9 8 Chapter 2: Long-Term Ontario Economic Projection Provides a projection of Ontario’s macroeconomic growth from 2010–2030. Expanding productive capacity, increased tax competitiveness and global and domestic demand are expected to result in average real GDP growth of 2.6 per cent from 2010 to 2030, a pace comparable to the past despite slower labour force growth and increased global competition Chapter also discusses: Fundamental determinants of long-term capacity — the supply of labour, the stock of capital and productivity Key external factors that affect economic performance — performance of the economy in other jurisdictions, commodity prices, the Canadian dollar exchange rate and interest rates Risks to the economic projection The perspective of other jurisdictions on long-term economic growth.

13 12 Chapter 3: Long-Term Sustainability of Public Services The economic and demographic projections in previous chapters have implications for the demand for public services in Ontario A doubling of the senior population by 2030 expected to increase demand for health care. Other factors that will drive the demand for and cost of health care services include changes in population health status, patients’ expectations, inflation, technology and medical practice Education spending will reflect the increasing number of elementary and secondary school-aged children over the next 20 years. Differences in growth among regions will mean both rise and fall of enrolment at the local level Emphasis on lifelong learning and services for underrepresented groups, including new immigrants, expected to raise demand for training services The impact of an aging population on economic growth expected to slow revenue growth, particularly as it lowers growth of the taxation revenue base — mitigated somewhat by increasing withdrawals from savings by seniors. Federal transfers also expected to respond to growing provincial demand for services due to demographic and economic factors The McGuinty government will ensure the province returns to a firm and sustainable fiscal footing. Treasury Board/Management Board of Cabinet conducting an expenditure review and the government will deliver its plan in 2010 Budget.

16 15 Chapter 4: Modernizing Ontario’s Tax System for Jobs and Growth The comprehensive tax package announced in the 2009 Budget creates a more modern tax system that will better support long-term economic growth, create more jobs, raise incomes and help sustain the public services Ontarians rely on The comprehensive tax package: Replaces the Retail Sales Tax with a value added tax that is combined with the federal Goods and Services Tax (GST) to create a 13 per cent Harmonized Sales Tax (HST) starting July 1, 2010; and Provides $15 billion in temporary and permanent tax relief to people and businesses over three years Tax measures in the package make Ontario significantly more attractive for new business investment and allow businesses to improve their competitiveness by lowering their prices The comprehensive tax package, together with other recent tax changes, will cut Ontario’s marginal effective tax rate (METR) on new business investment in half, making Ontario a highly attractive location for businesses to invest and create jobs A study by accounting firm KPMG also shows that the comprehensive tax package significantly improves Ontario’s tax competitiveness A recent study by Professor Jack Mintz estimates that within 10 years the comprehensive tax package, together with other recent tax changes, will provide large benefits for Ontario — $47 billion in new business investment, 591,000 net new jobs and higher annual incomes of up to 8.8 per cent.

18 17 Impact of 2009 Budget on Ontario’s Tax Competitiveness, All Industries 12 3 4 Total Tax Index Note: The total tax burden for each city, over a 10-year period from business start-up, is expressed as an index with the average for all U.S. cities in KPMG’s Competitive Alternatives 2008 set at 100. 1 Reflects tax measures in effect or announced prior to the date of the 2009 Ontario Budget. 2 Reflects tax measures announced prior to August 1, 2009 that are expected to be in effect in 2011 and subsequent years. 3 Average for Ontario cities included in the study. 4 Average for U.S. cities included in the study. Sources: KPMG and Ontario Ministry of Finance.

22 21 Chapter 6: Towards a Prosperous and Sustainable Future Job creation and output growth are increasingly driven by the service sector Greening the economy and promoting the transition to a low-carbon future are central to Ontario’s long-term prosperity and sustainability The McGuinty government is preparing Ontario to confront the challenges of the coming decades and to seize opportunities emerging in the new economy. Key government policies and programs focus on: Modernizing Ontario’s tax system Reducing regulatory barriers to innovation and economic growth Addressing the infrastructure gap Investing in knowledge and skills Ensuring environmental sustainability Fostering innovation and a knowledge-based economy Partnering with both emerging and established industries for economic growth and diversity.

24 23 Conclusion Ontario’s Long-Term Report on the Economy highlights the challenges and opportunities the province may face over the next 20 years, while outlining measures the government is taking to prepare the province to grasp opportunities emerging in the new economy. The McGuinty government’s initiatives for improving overall productivity and future economic growth include modernizing the tax system, ensuring environmental sustainability, investing in infrastructure and key services such as health care and education, while continuing to be prudent with its fiscal management. 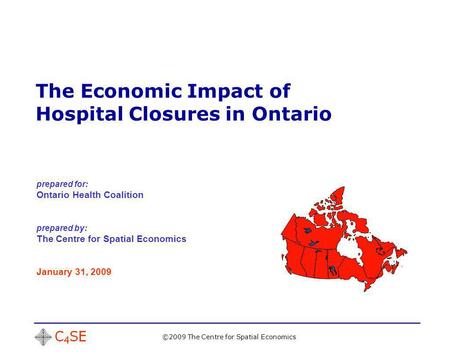 The Economic Impact of Hospital Closures in Ontario ©2009 The Centre for Spatial Economics prepared for: Ontario Health Coalition prepared by: The Centre. 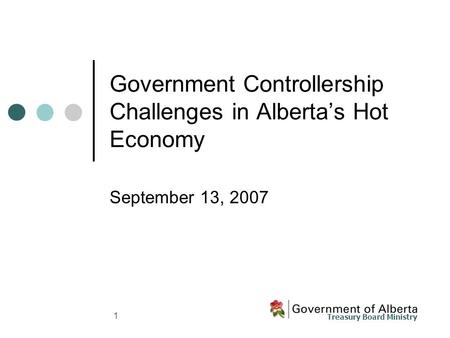 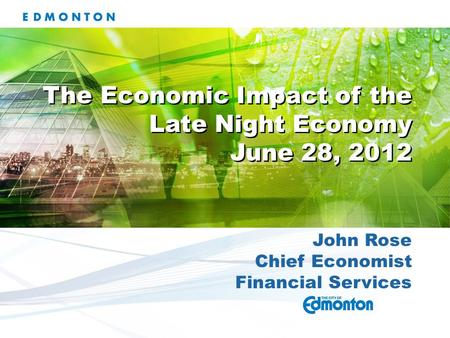 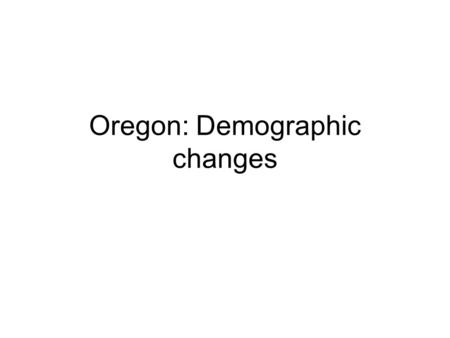 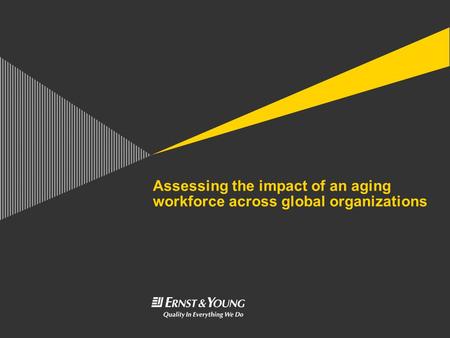 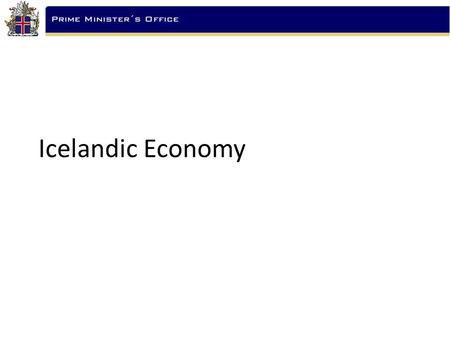 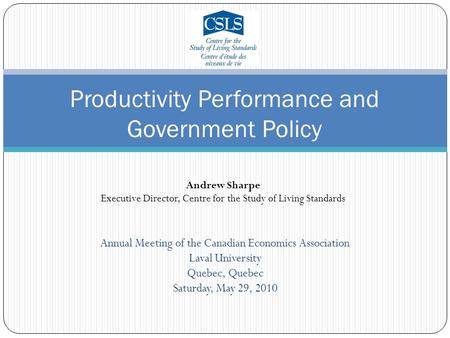 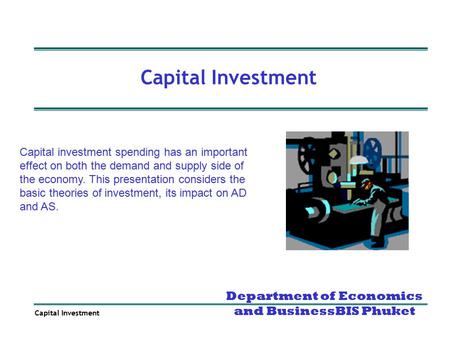 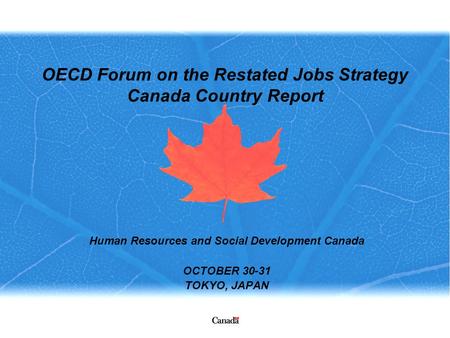 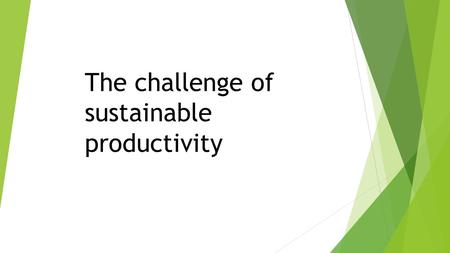