Presentation on theme: "With help from and. (17) When the magi had left, suddenly an angel of the Lord appeared to Joseph in a dream, saying, “Get up and take the child and his."— Presentation transcript:

1 With help from and

2 (17) When the magi had left, suddenly an angel of the Lord appeared to Joseph in a dream, saying, “Get up and take the child and his mother. Flee into Egypt. Stay there until I tell you, for King Herod will be searching for the child to destroy him.”

3 (14) King Herod sent the magi off to Bethlehem, saying, “Go and search for the young child. When you have found him, let me know, so that I may also go and do him homage.”

4 (4) Being an upright man, and not wanting to disgrace her in public, Joseph had decided to leave Mary quietly.

5 (20) After King Herod died, an angel of the Lord appeared to Joseph in Egypt in a dream, saying, “Get up and take the child and his mother. Go to the land of Israel, for those who sought to kill the child are dead.”

6 (18) Joseph got up that night and took the child and his mother, and went to Egypt.

7 (8) She wrapped him in bands of cloth, and laid him in a manger, because there was no room for them at the inn.

8 (5) But as he considered this, an angel of the Lord appeared to him in a dream, saying, “Joseph, do not be afraid to take Mary as your wife. The child in her is of the Holy Ghost. She will give birth to a son. You will name him Jesus.”

9 (21) Joseph got up and took the child and his mother, and returned to the land of Israel.

10 (7) It happened, while they were there, that the time came for her to deliver her child, and Mary gave birth to her firstborn son.

11 (9) There were some shepherds out in the nearby fields, keeping watch over their flock at night. An angel of the Lord appeared before them and said, “Don’t be afraid! Listen, a Saviour has been born to you today who is Christ the Lord. Here is your sign: you will find a baby wrapped in strips of cloth, lying in a manger.”

12 (12) After Jesus was born in Bethlehem in the days of King Herod, some magi from the east came to Jerusalem, saying, “Where is he who is born King of the Jews? For we saw his star when it rose, and have come to do him homage.”

13 (6) About this time, Caesar Augustus ordered a census of the entire Roman Empire, and so everyone went to their own towns to be registered. Because he was a descendant of King David, Joseph set out from Nazareth to the town of David, called Bethlehem, to register with his pregnant fiancée Mary.

14 (11) Having seen the baby, the shepherds made known what they had been told about this child, and all who heard it marveled at the things that the shepherds told them.

15 (19) When King Herod realized that he had been tricked by the magi, he was furious and sent out soldiers to kill all the male children two years old or younger throughout Bethlehem and the surrounding countryside.

16 (2) The angel said to Mary, “Listen! You will become pregnant and give birth to a child. You will name him Jesus.”

17 (10) The shepherds left in a hurry and they found Mary and Joseph, and the baby was lying in the manger.

18 (15) When they came into the house and saw the young child with his mother Mary they bowed down and did him homage. Opening their treasures, they offered to him gifts of gold, frankincense, and myrrh.

19 (13) When Herod the king heard about this, he was disturbed, as was all of Jerusalem with him.

21 (16) But the magi were warned in a dream that they should not return to King Herod, and so they travelled back to their own country by a different route.

22 (1) God sent the angel Gabriel to a town in Galilee called Nazareth to a virgin engaged to a man named Joseph, who was descended from King David. The virgin’s name was Mary.

Download ppt "With help from and. (17) When the magi had left, suddenly an angel of the Lord appeared to Joseph in a dream, saying, “Get up and take the child and his." 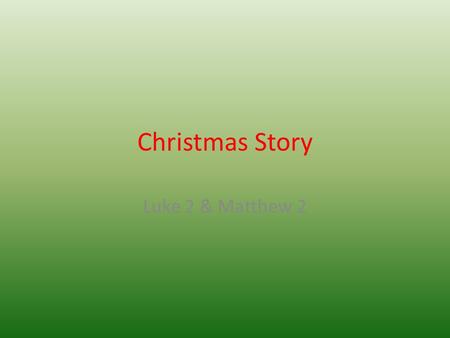 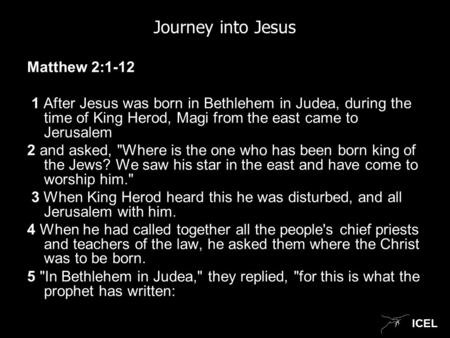 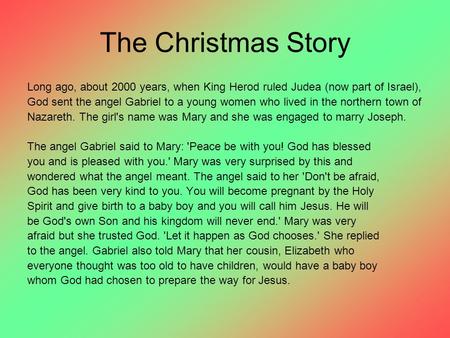 The Christmas Story Long ago, about 2000 years, when King Herod ruled Judea (now part of Israel), God sent the angel Gabriel to a young women who lived.