4 Terms to Know K – Kelvin, it measures absolute temperature
F – Fahrenheit, Our Measure of Temperature AU – Astronomical Units, Measure of distance in space (For us the measure of distance from the Sun) Mph – Miles Per an Hour, measurement of Speed (how fast something is going)

5 Sun All nine planets orbit the Sun
The Sun’s Surface is called the photosphere The Sun’s Temperature is 5800K Which is nearly 10,000 Degrees Fahrenheit

6 Mercury Closest to the Sun 8th largest planet of 9
Small rocky planet like Earth’s Moon It is Covered by craters .4 AU’s from the Sun

7 Venus Full of hot temperatures
Full of carbon dioxide = which creates a blanket of Clouds Heat gets trapped underneath the thick layer of clouds keeping Venus really Hot! Surface is like Earth but without water which probably boiled away due to how Hot Venus is Full of Gentle plains No hills or Mountains Second planet from the Sun 6th Largest of all 9 planets .7 AU’s

8 Earth Our Planet 3rd from the Sun 5th largest planet of 9
Earths Surface is very young it was first formed from Erosion and tectonic processes. 71% of Earth is covered by Water 21% of Earth’s atmosphere is oxygen, which WE breath! Earth is the most beautiful planet from space! 1 AU

9 Mars 4th planet from the Sun 7th largest of 9
Mars is the Second most interesting and beautiful planet (behind Earth) Lakes and ocean might have once existed on Mars but not any more. Only other Planet with evidence of Life once existing. 1.5 AU’s

10 Asteroid Belt Region between inner planets and outer planets
More than 7000 asteroids have been discovered here Largest Asteroid by far is called Ceres Ceres is considered 25% bigger than any other Asteroid Recently been Considered a Dwarf Planet, Which is a Planet not big enough but close enough to be called a Planet! 2.77 AU’s

11 Jupiter 5th planet from the Sun Largest planet in our Solar
System (of 9) 318 times larger than Earth! Planet does not have a solid surface due to is gaseous composition Jupiter has winds that can be as fast as 400 mph Jupiter also has bands/ rings that go around the planet (they are not as noticeable as Saturn's). 5.2 AU’s

12 Saturn 6th Planet from the Sun 2nd Largest out of 9
Like Jupiter, Saturn has bands that run around the Planet (Saturn's are much larger and Noticeable than Jupiter). Saturn is composted of mostly Gas just like Jupiter 9.5 AU’s

13 Uranus 7th Planet from the Sun 3rd Larges of the 9 plants
Like the other gas planets Uranus has bands of clouds that blow around very rapidly Uranus blue color is due to a gas called methane 19.6 AU’s

14 Neptune 8th Planet from the Sun 4th Largest in Size (out of 9)
Blue color result from a Gas called Methane Just like Uranus. Has rapid winds and storms Winds are fastest in Solar System and can reach 2000 km an hour 30 AU’s

15 Pluto Farthest Planet from the Sun Smallest Planet out of the 9
It is now officially considered a Dwarf Planet! There is not much known about Pluto surface, etc. 39 AU’s

16 Conclusion Scientist’s are Working day and night to always expand their knowledge of our Solar System and with each passing year New Planets are Discovered Here are some New ones: Up Coming Assignments: Project (model of Solar System) Test on Planets! Know the Facts from these Slides  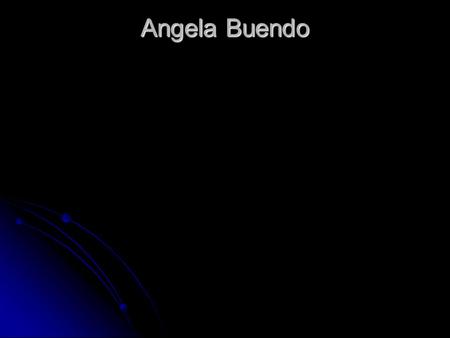 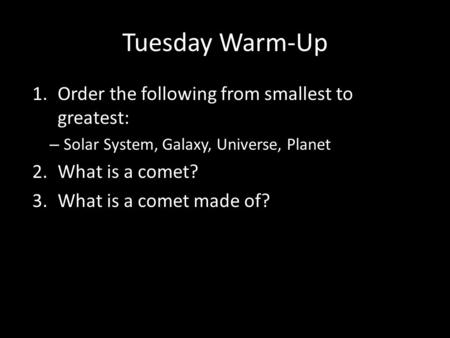 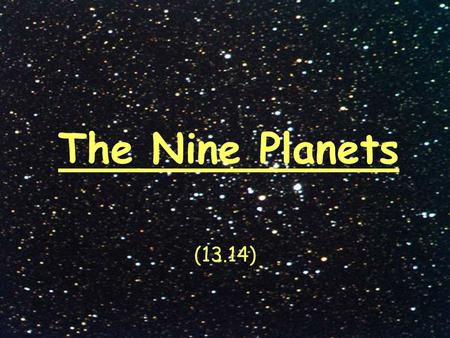 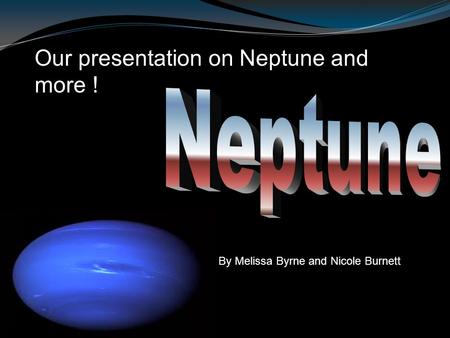 Our presentation on Neptune and more ! By Melissa Byrne and Nicole Burnett.