7 7 Generalized Anxiety Disorder Generalized anxiety disorder is a disorder in which a person is continually tense, apprehensive, and in a state of autonomic arousal. People with this condition are often jittery, agitated, and sleep-deprived. It is often, but not always, accompanied by depressed mood.

8 Panic Disorder Panic disorder is marked by unpredictable minutes-long episodes of intense dread which may include feelings of terror, chest pains, choking, or other frightening sensations. 8

9 9 Phobias Phobias are marked by a persistent and irrational fear of an object or situation that disrupts behavior.

10 10 Obsessive-Compulsive Disorder Obsessive-compulsive disorder is marked by repetitive thoughts (obsessions) and actions (compulsions) that cause distress.

11 11 Post-Traumatic Stress Disorder Post-traumatic stress disorder (PTSD) can be suffered by war veterans as well as those who have survived accidents, disasters, or assaults and is shown in the following symptoms. 1.Haunting memories 2.Nightmares 3.Social withdrawal 4.Jumpy anxiety 5.Sleep problems Bettmann/ Corbis

12 12 Post-Traumatic Stress Disorder Some researchers are more interested in the resiliency of those who do not develop PTSD. Surviving suffering can indeed lead to an increased appreciation for life, more meaningful relationships, increased personal strength, changed priorities, and a richer spiritual life. This positive outcome is called post-traumatic growth.

14 14 The Learning Perspective Learning theorists suggest that fear conditioning leads to anxiety. This anxiety then becomes associated with other objects or events (stimulus generalization) and is reinforced. John Coletti/ Stock, Boston

15 15 The Learning Perspective Investigators believe that fear responses are inculcated through observational learning. Young monkeys develop fear when they watch other monkeys who are afraid of snakes.

16 16 The Biological Perspective Natural Selection has led our ancestors to learn to fear snakes, spiders, and other animals. Therefor, fear preserves the species. Twin studies suggest that our genes may be partly responsible for developing fears and anxiety. Twins are more likely to share phobias.

18 Somatoform Disorders A somatoform disorder is a psychological disorder in which the symptoms take a bodily form without a physical cause. In the rare conversion disorder, a person experiences specific, genuine physical symptoms for which no physiological cause can be found. In the relatively common hypochondriasis, people interpret normal sensations as being symptoms of a dreaded disease. 18

19 19 Dissociative Disorders In dissociative disorders conscious awareness becomes separated (dissociated) from previous memories, thoughts, and feelings. Many people experience feelings of dissociation on occasion without experiencing a disorder. Facing a trauma, this detachment may even protect a person from being overwhelmed.

21 21 Understanding DID Skeptics question the authenticity of DID because: -It may be a natural extension of normal capacity for personality shifts. -It is a fairly recent and growing diagnosis, found mostly in North America. -It may be a cultural phenomena, created by therapists in a social context. Others point to supportive evidence: -There are distinct brain and body states associated with different personalities -May be a way of dealing with anxiety -May be associated with post-traumatic stress

22 22 Personality Disorders Personality disorders are characterized by inflexible and enduring behavior patterns that impair social functioning. They are usually without anxiety, depression, or delusions.

23 23 Antisocial Personality Disorder In antisocial personality disorder the person (usually a man) exhibits a lack of conscience for wrongdoing, even toward friends and family members. Formerly, this person was called a sociopath or psychopath.

24 24 Understanding Antisocial Personality Disorder Like mood disorders and schizophrenia, antisocial personality disorder has biological and psychological reasons. Youngsters, before committing a crime, respond with lower levels of stress hormones than others do at their age. 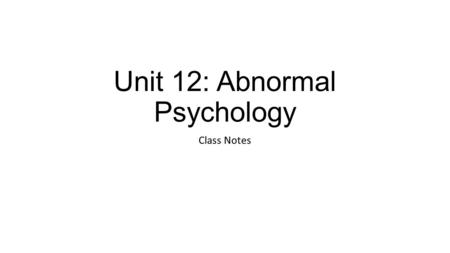 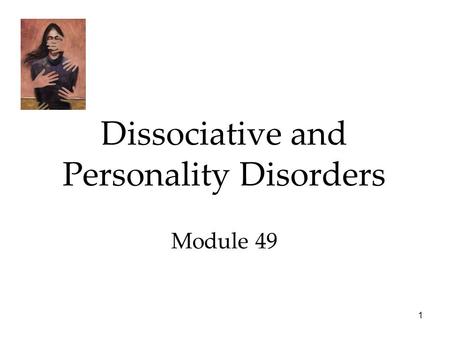 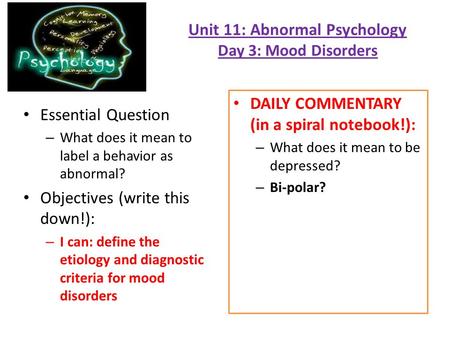