1 Chapter 11- Genetics Meiosis Principles of genetics require:
-each organism inherits a single copy of every gene from each parent -during gamete formation, two sets of genes must separate, so each gamete contains just one set of genes

6 Chapter 11- Genetics Phases of Meiosis
How haploid cells (gametes) produced from diploid cells (somatic cells) Meiosis- cell division that results in a gamete containing half the number (n) of chromosomes of its parent (2n) Involves two rounds of division: -Meiosis I -Meiosis II

8 Chapter 11- Genetics Phases of Meiosis Meiosis I Similar to mitosis
Four phases the same: prophase I, metaphase I, anaphase I, and telophase I

12 Chapter 11- Genetics Gamete Formation
In male animals, gametes produced through meiosis called sperm In some plants, pollen contains sperm cells In female animals, only one cell produced is made into a gamete Cytokinesis is uneven: produces one egg and 3 polar bodies

16 Chapter 11- Genetics Genes & Dominance
Studied 7 different pea plant traits Trait- a characteristic that can be passed on to offspring For each trait, studied a contrasting character: Ex. Seed color- green or yellow

18 Chapter 11- Genetics Original pair of plants = P generation
Offspring = F1 generation Hybrid- offspring of parents that have different forms of a trait Results? Every offspring had a character of only one of the parents

20 Chapter 11- Genetics Two conclusions:
Inheritance determined by factors passed from one generation to the next Gene- the functional units of inheritance Each trait controlled by one gene with two contrasting forms Alleles- alternate forms of a gene

23 Chapter 11- Genetics Segregation
What had happened to recessive alleles (traits) in plants? Mendel allowed F1 plants to self-pollinate Produced F2 generation which showed recessive trait in 1 out of 4 plants (3:1 ratio)

27 Chapter 11- Genetics Law of Segregation- states that every individual has two alleles of every gene; when gametes are produced, each gamete receives one of these alleles

31 Chapter 11- Genetics Genetics & Probability
Probability- the likelihood that a particular event will occur Two possible outcomes for a coin flip: heads or tails Probability of each occurring is equal Chance of heads is 1 in 2, or 50%

32 Chapter 11- Genetics Chance of heads coming up three in a row?
Each flip is an independent event: Probability of three heads in a row- ½ x ½ x ½ = 1/8 Way alleles segregate is random, like a coin flip Principles of probability can be used to predict outcomes of genetic crosses

37 Chapter 11- Genetics Probability & Segregation
Probability predicts that if the alleles segregate, then a 3:1 phenotypic ratio should be seen Each cross showed a 3:1 ratio Mendel’s law of segregation proven correct

38 Chapter 11- Genetics Since probabilities predict averages:
the larger the number of individuals, the closer the data comes to the probability

39 Chapter 11- Genetics Exploring Mendelian Genetics
Mendel further investigated: Alleles segregate- but do alleles package together? or are they independent of one another?

43 Chapter 11- Genetics Summary of Mendel’s Principles
Inheritance is determined by individual units called genes. Genes passed from parents to offspring. When two or more forms (alleles) of a gene exist, some forms may be dominant, others recessive.

44 Chapter 11- Genetics In most sexually reproducing organisms, each adult has two copies of each gene – one from each parent. These copies are segregated from one another during meiosis (gamete formation) Alleles for different genes usually segregate independently of one another

45 Chapter 11- Genetics Complex patterns of Inheritance
Important exceptions to Mendel’s principles Some alleles are neither dominant nor recessive Many traits controlled by multiple alleles, or multiple genes

48 Chapter 11- Genetics Codominance Expression of both alleles
(ex. White bull crossed with a red cow yields a roan calf) Both alleles contribute to the phenotype

54 Chapter 11- Genetics Genetics & the Environment
Characteristics of any organism not solely determined by genes Determined by interaction between genes and environment Genes provide plan, how plan goes also depends on environment 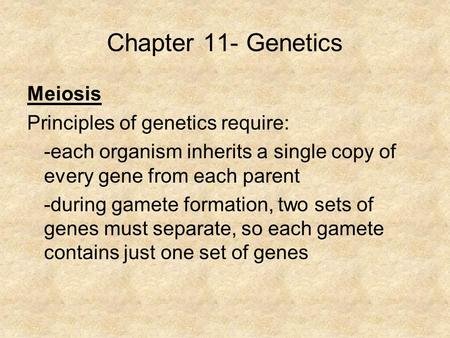 Chapter 11- Genetics Meiosis Principles of genetics require: -each organism inherits a single copy of every gene from each parent -during gamete formation,