A community movement brought to you by…

Presentation on theme: "A community movement brought to you by…"— Presentation transcript:

2 Water First for Thirst It’s good for you… It’s good for our community…
Together, we can make water the easy choice! Click for animation: In the next 15 minutes, I will share with you why Water First for Thirst is good for your organization and good for our community. We will see several examples of how other organizations in our community have encouraged water first for thirst. Finally, I will show you simple changes you can make to make water the easy choice for the children and families you serve .

3 Water First for Thirst Everything a body needs… Skin Muscles Brain
Digestive system Kidneys Water is the original sports drink – every system in our body depends on water to function optimally. Our skin, muscles, brain, digestive system, kidneys etc. all work at their best when we drink water

4 Water First for Thirst …and nothing it doesn’t.
No sugar No fat/cholesterol No added sodium No artificial additives Together, we can make water the easy choice! Water is naturally free of the nutrients we want to consume less of too.

5 50 gallons of sugary drinks
What Are We Drinking? 50 gallons of sugary drinks = 38 pounds of sugar Source: Ogden et al. Consumption of Sugar Drinks in the United States The average American drinks about 50 gallons of sugary drinks annually. That adds up to about 38 pounds of sugar in a year! Sugary beverages are the number one source of calories in the American diet. The Ohio Department of Health describes sugary beverages as: pop, soda, sweetened powder drink mixes (ex. Kool-aid/lemonade) Sunny Delight, Hawaiian Punch, Gatorade, energy drinks (not including diet drinks) One 20 ounce bottle of soda contains about 16 teaspoons of sugar. Resources: Ogden CL, Kit, BK, Carroll MD, Park, S. Consumption of Sugar Drinks in the United States, NCHS data brief, no71. Hyattsville, MD: National Center for Health Statistics Division of Nutrition and Physical Activity. Research to Practices Series No. 3: Does Drinking Beverages with Added Sugars Increase the Risk of Overweight? Atlanta: Centers for Disease Control and Prevention, 2006.

6 What Are We Drinking? In 2002, 44% of toddlers, 19–24 months old consumed at least one sugary drink every day. Source: Centers for Disease Control and Prevention, 2006. In 2002, The FITS study found that almost half of children ages months consumed sugar sweetened beverages at least once per day. Resources: Ogden CL, Kit, BK, Carroll MD, Park, S. Consumption of Sugar Drinks in the United States, NCHS data brief, no71. Hyattsville, MD: National Center for Health Statistics Division of Nutrition and Physical Activity. Research to Practices Series No. 3: Does Drinking Beverages with Added Sugars Increase the Risk of Overweight? Atlanta: Centers for Disease Control and Prevention, 2006.

9 The Effects… For adults….
Drinking one or two sugary drinks each day increases the risk of developing type 2 diabetes by 25%. Malik VS, et al. Sugar-Sweetened Beverages and Risk of Metabolic Syndrome and Type 2Diabetes. Diabetes Care. 2010; 33:2477–2483 So what effect does all this sugar have? Review slide….

10 The Effects… For children…..
every sugary drink they drink each day, increases their likelihood of developing obesity during childhood by about 60%. Ludwig DS, Peterson KE, Gortmaker SL. Relation between consumption of sugar-sweetened drinks and childhood obesity: a prospective, observational analysis. Lancet 2001; 357: 505–08. So what effect does all this sugar have? For every 1 sugary drink a child drinks each day, their likelihood of developing obesity during their childhood goes up by about 60%. The OHIO DEPARTMENT OF HEALTH’s Report on the Body Mass Index of Ohio’s Third Graders 2004–2010 reinforced this research, finding that children who regularly consumed more than 1 sugar sweetened beverages per day were more likely to be at an unhealthy weight than those who drank fewer SSBs. According to the Ohio Family Health Survey, compared to healthy weight children, Ohio’s children with obesity are 4.6 times more likely to have diabetes 1.8 times more likely to have asthma 2 times more likely to have poor health status Source: Ohio Family Health Survey,

13 Making Water the Easy Choice in Our Community...
While the issue of obesity, especially childhood obesity, is complex and requires many changes at many levels, it is clear that reducing the number of SSB children are consuming is an important component of any effort to improve health and reduce weight-related illness. But we are making progress. Many of our local organizations have implemented policy, system and environmental changes that are making it easier for children and families to choose water.

14 What Can You Do? Commit to making the healthy choice the easy choice….. “Behind every child raising a sugar sweetened beverage to their lips, there are adults that let it be there, priced it or advertised it.” Carol Smathers MA MPH, Field Specialist, Youth Nutrition and Wellness, OSU Extension Family and Consumer Sciences While it is true that parents are ultimately the decision makers about what their children eat and drink, the choices parents and children make are shaped by the choices they have. Every time a child eats of drinks something – healthy or not, there are many adults who affected their choice. Adults make decisions about what messages children see, what foods they can choose from and the financial and societal costs of that food. By changing your policies, by writing down and committing to a change in the environment in which you serve your customers, you can help make the healthy choice the easy choice.

15 What Can You Do? Make Water the Easy Choice.
Serve only water Pricing strategies Vending machine placement Limit portion sizes Every organization is unique and there are a variety of different ways you can make water the easy choice. When freely serving beverages at events and meetings, serve only water. Make water free or at least cheaper relative to other beverages Replace at least ½ (or all) of the sugary drinks for sale in vending machines and foodservice with water. Place other beverages in the very top and very bottom rows and fill the others with water. Limit the portion sizes of sugary beverages that can be served/sold in your facility. (example: only 12 ounce cans and no 16 or 20 ounce bottles)

16 What Can You Do? Change the Message You Send
Limit logos Be selective about sponsors Add “Water First for Thirst” Model drinking water Eliminate ads and logos for sugary drinks. Avoid taking money, resources and product donations from beverage companies. Add the Water First for Thirst messages to your own marketing efforts. CPH’s website has lots of great resources. Show people drinking water in your ads – even for other things

17 Our Community… Community Development for All People
Water will always be available whenever other beverages such as coffee, tea, 100% fruit juice and/or milk are offered. Community Development for All People Will serve only water or unsweetened beverages for any meals or events. Will not serve sugar sweetened beverages (e.g., fruit punch, soda, flavored drinks) at any meal or event. In 2012, Columbus Public Health partnered with 10 community organizations and agencies to create a healthier environment. Of those 10 organizations, 8 established policies and environments specifically intended to make water the easy choice for their clients and visitors. Let’s review how they did it….. (review slide content)

20 Our Schools… Since 2009, all beverage vending machines located in student areas of Columbus City Schools have sold only water. In 2009/2010, Columbus City Schools stepped up as a leader in making water the easy choice for students by implementing a water-only vending policy. Since 2009, beverage vending machines accessible to students in CCS have stocked nothing but water.

21 Our Healthcare… In the first quarter of 2011 – Nationwide Children’s Hospital eliminated all sugary drinks from their facilities and property, including Cafeteria and Gift Shops Food Court (includes Subway and Koko’s) All Vending (including off sites) Patient and Family Food Menus They also reduced the price of water. In 2011, NCH took a slightly different approach. They eliminated the sale of sugary drinks in all vending, foodservice and patient meals. At that time they also reduced the price of water to make it more competitive in sales. NCH does allow some exceptions Physicians/ residents/ nurses may order soda for patients (clinical reasons) Families, visitors, staff may bring SSBs to campus

22 2.72%* NCH was able to document that not only did they not lose revenue with this change – they actually saw a net increase of 2.72% in beverage sales after eliminating sugary beverages. NCH also was able to document that milk and water sales increased, suggesting that when sugary drinks were less readily available, consumers began to choose more healthful beverage options. * Percent Change 2010 to 2011

23 Our Government… In 2012, Columbus Public Health
Required vending machines to have at least 50% of slots filled with water. Eliminated all sugary drinks from vending machines. Reduced the price of water (relative to diet sodas). Established healthy meeting guidelines for serving only water, coffee, tea and skim/1% milk at meetings and events. In 2012, Columbus Public Health followed a similar plan and eliminated the sale of sugary drinks in all vending machines and made water less expensive than diet drinks.

24 Our Parks… Columbus Recreation and Parks
CAP City Nights and APPS events: Will not serve sugar-sweetened beverages. Only water, unflavored skim or 1% milk or 100% fruit juice will be offered. In 2013, Columbus Recreation and Parks course catalogs will feature a logo for a water product. instead of a sugar-sweetened beverages. Note: APPS (Applications for Purpose Pride and Success) is a violence prevention and intervention program aimed at reducing the incidence of gang-involved shootings and youth homicides in Columbus neighborhoods. The APPS program operates at four Recreation centers in the city, offering activities and intervention for youth and young adults.

25 Be a Water First for Thirst Partner
Do you need help to make water the easy and appealing choice? Columbus Public Health can help! Contact: Healthy Children, Healthy Weights (614) publichealth.columbus.gov/healthy-children-healthy-weights.aspx

Download ppt "A community movement brought to you by…" 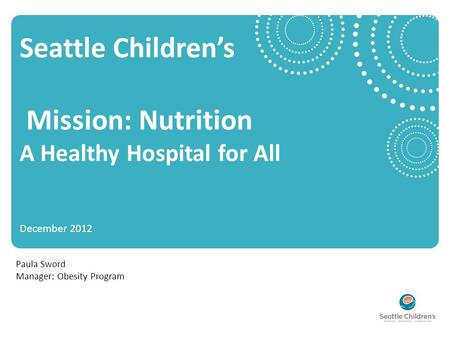 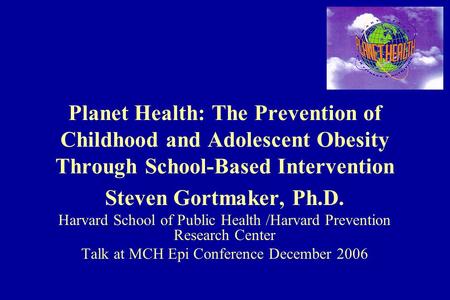 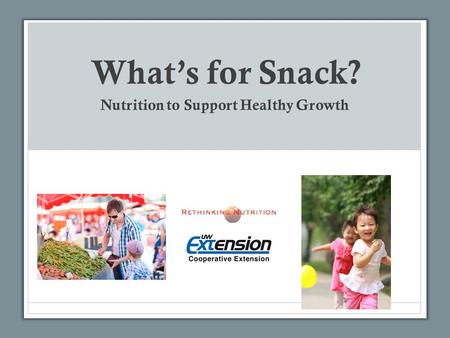 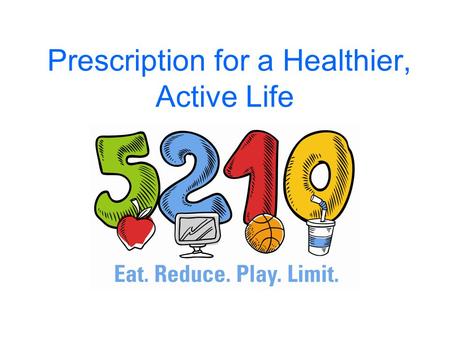 Prescription for a Healthier, Active Life 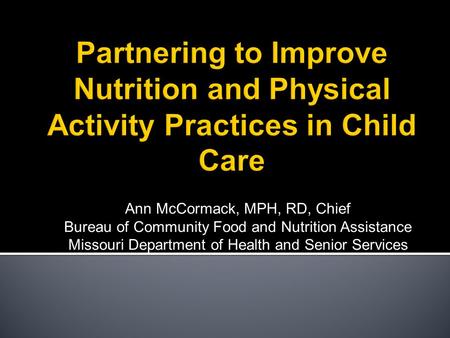 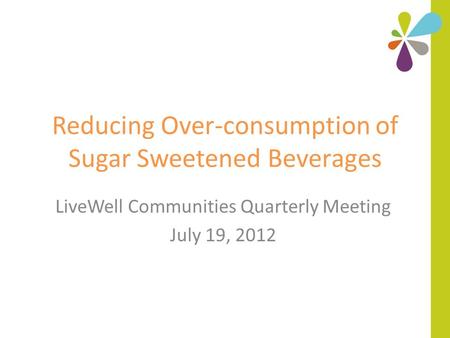 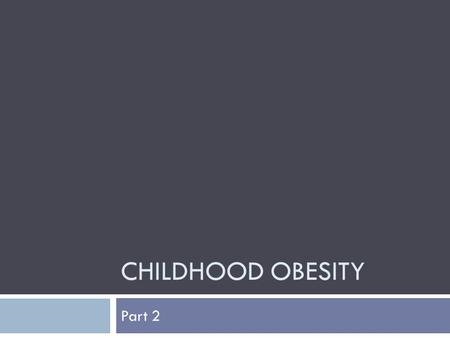 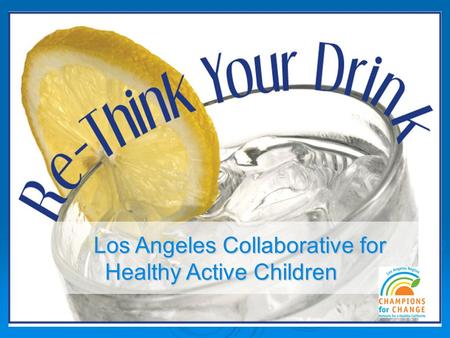 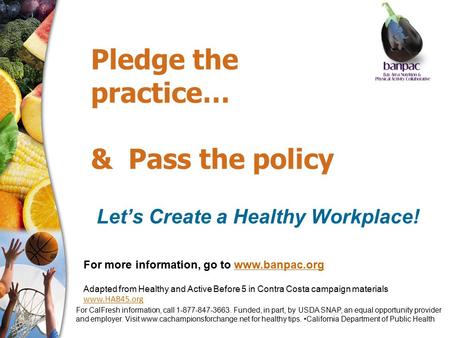 Pledge the practice… & Pass the policy Let’s Create a Healthy Workplace! For more information, go to Adapted from Healthy. 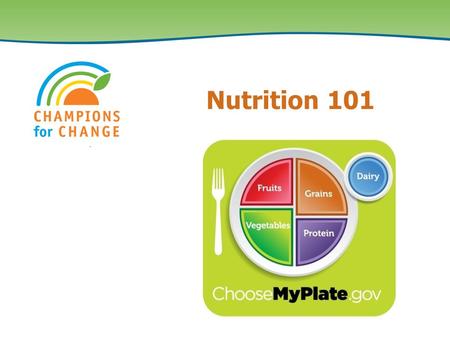 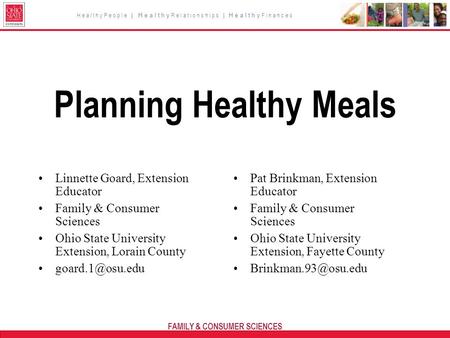 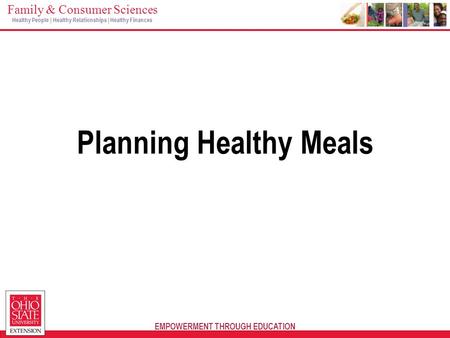 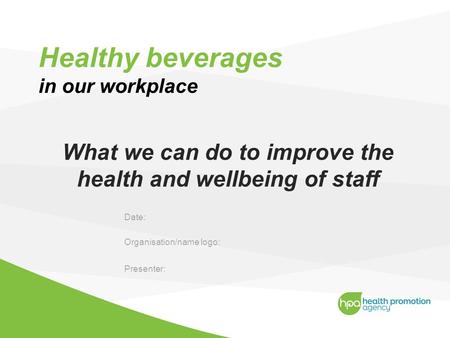 Healthy beverages in our workplace What we can do to improve the health and wellbeing of staff Date: Organisation/name logo: Presenter: 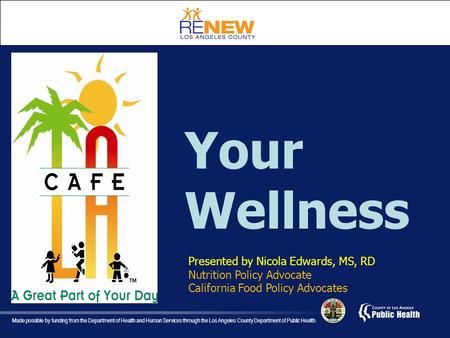 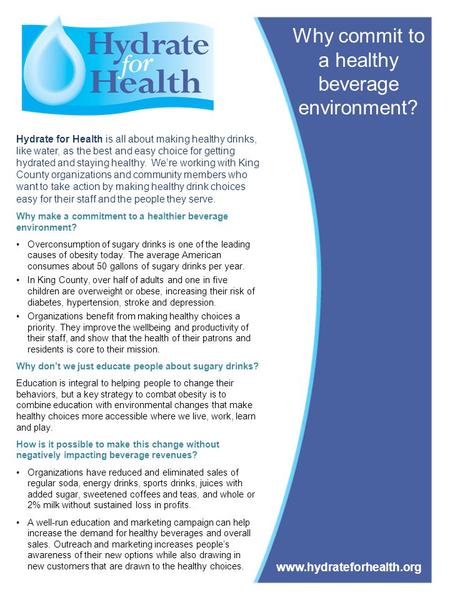 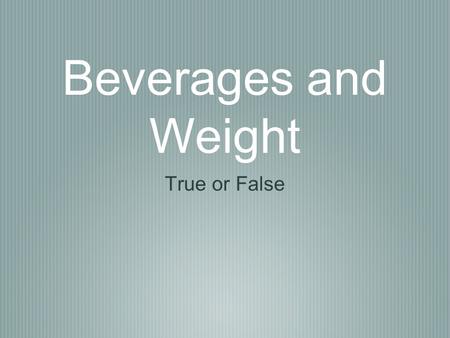 Beverages and Weight True or False. Gatorade is a healthy alternative to water when not exercising. True or False? 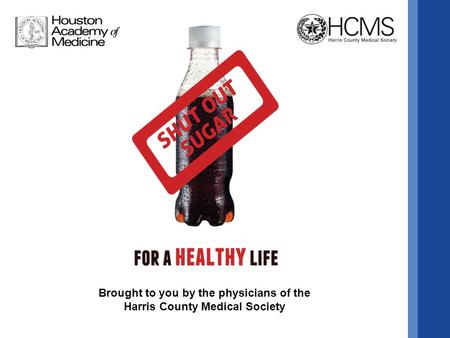 Brought to you by the physicians of the Harris County Medical Society. 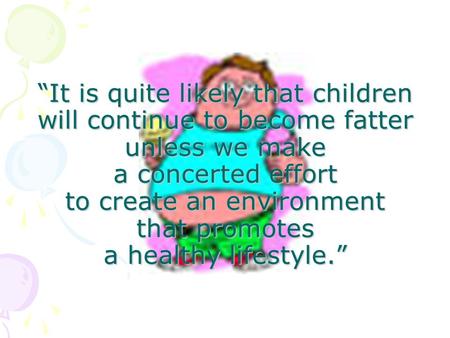 “It is quite likely that children will continue to become fatter unless we make a concerted effort to create an environment that promotes a healthy lifestyle.” 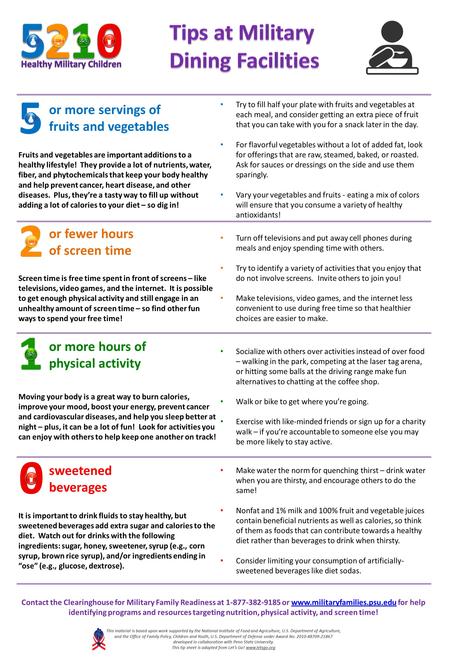 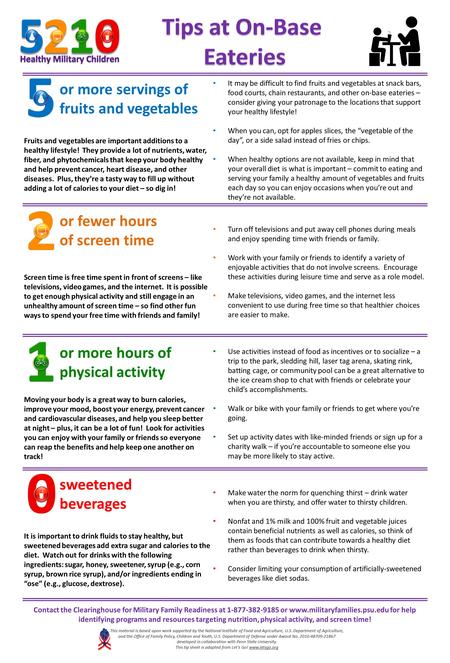 This material is based upon work supported by the National Institute of Food and Agriculture, U.S. Department of Agriculture, and the Office of Family.