Today’s Topic (02/03/14) How did 1 st week of labs go? Questions? Comments? Polarization assays—important for  2 and for binding assays (Lab 2)

2 Fluorescence Polarization Important for binding assays Also important for  2. 1. Dyes have a transition absorption dipole moment If light is polarized in direction of dipole,, will absorb light; if polarized perpendicular to light, it won’t absorb it. Signal proportional to sin  a  a  is angle between light vector and dipole moment vector. 2. Once molecule is excited, then has probability of emitting, via an emission dipole moment, (which tends to be aligned with the absorption dipole moment). The probability that it will make it through the analyzer is sin  e  e  is angle between emission dipole vector and analyzer. Excited fluorophores Coordinate system

3 How to measure FP AnisotropyPolarization Polarization & Anisotropy: Just slightly different forms Generally use Anisotropy because of simpler forms when time-dependent. Also simpler when have multiple components: A =  i A i where  i is the mole fraction of the ith component. parallel ( ) perpendicular ( ) (0 to 0.5) (0 to 0.4)

4 Polarization vs. Anisotropy Denominators with P, A AnisotropyPolarization Generally use Anisotropy because of simpler forms when time-dependent. Also simpler when have multiple components: A =  i A i where  i is the mole fraction of the i th component. P defined by analogy with dichroism ratio Anisotropy is a more useful form for experimental data on complex systems Non-polarized light (along x-axis) Break into I z, I y. The denominator of Anisotropy is simply the total light that would be observed if no polarizers were used. (Come in along x-axis.) Call I z = I || Call I y = I Call I x = I I x + I y + I z = 2 I + I ||

11 Anything that adds mass can be used in FP: Homogeneous Assay http://www.iss.com/resources/research/technical_notes/PC 1_FP.html

14 Example of living cell FP Septin-GFP constructs in MDCK Cell: Fluorescence image of a living cell (MDCK) expressing septin molecules linked to green fluorescent protein (GFP). The image was recorded with the Fluorescence LC-PolScope which reveals the polarized fluorescence of septin fibers in false color. Each hue is associated with a different orientation of the GFP dipoles, which in turn reflect the fiber orientation, as septin-GFP molecules are locked into the fiber assembly. The white color of the fluorescence from the cytosol, on the other hand, reveals the lack of a common alignment of septin-GFP molecules suspended in the cytosol. Credit: Bradley DeMay and Amy Gladfelter, Dartmouth College. http://openpolscope.org/pages/ Fluorescence_Polarization.htm

17  2 and R o in FRET in Angstroms J is the normalized spectral overlap of the donor emission (f D ) and acceptor absorption (  A ). Does donor emit where acceptor absorbs? q D is the quantum efficiency (or quantum yield) for donor emission in the absence of acceptor (q D = number of photons emitted divided by number of photons absorbed). n is the index of refraction (1.33 for water; 1.29 for many organic molecules).   is a geometric factor related to the relative orientation of the transition dipoles of the donor and acceptor and their relative orientation in space. Very important; often set = 2/3.

18   Orientation Factor where  DA is the angle between the donor and acceptor transition dipole moments,  D (  A ) is the angle between the donor (acceptor) transition dipole moment and the R vector joining the two dyes.  2 ranges from 0 if all angles are 90 °, to 4 if all angles are 0°, and equals 2/3 if the donor and acceptor rapidly and completely rotate during the donor excited state lifetime. x y z D A R AA DD  DA This assumption assumes D and A probes exhibit a high degree of rotational motion Can measure whether donor & acceptor randomize by looking at polarization.  2 is usually not known and is assumed to have a value of 2/3 (Randomized distribution) The spatial relationship between the DONOR emission dipole moment and the ACCEPTOR absorption dipole moment (0 4)  2 often = 2/3

21 Extra Slides We briefly mentioned how Green Fluorescent Protein (GFP) can be perfectly labeled in vivo because it is placed in a cell by genetic means, i.e. through DNA attached to another protein’s DNA (like kinesin-GFP fusion, shown), and then the DNA is transfected inside the cell. GFP now comes in many colors. 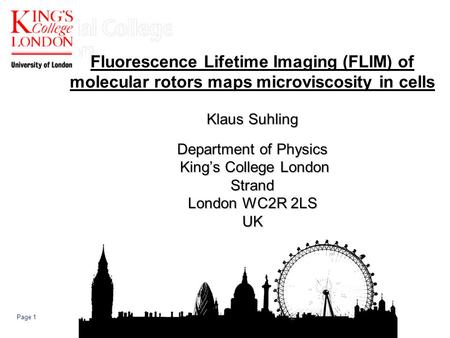 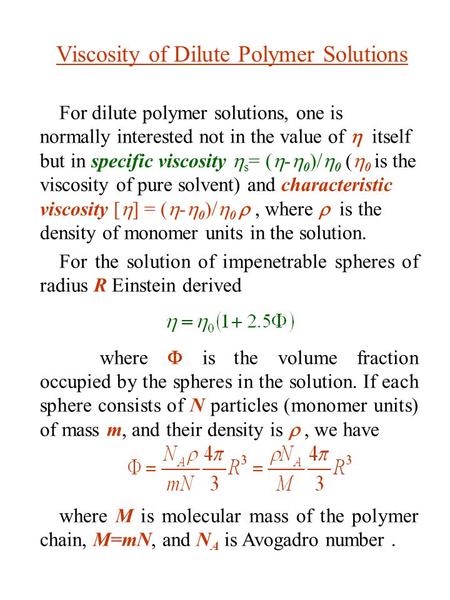 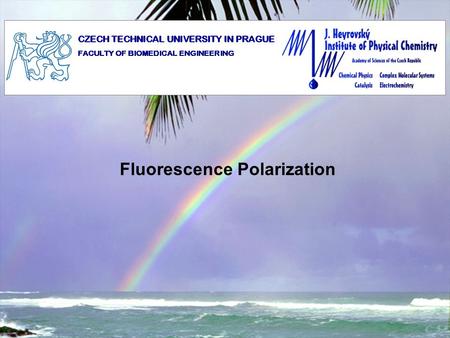 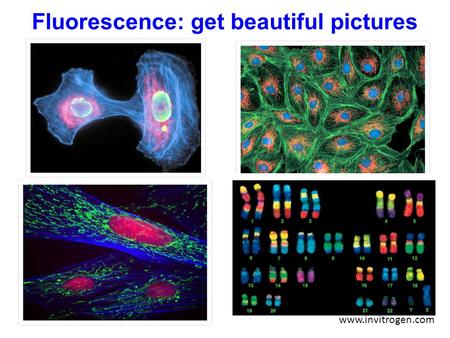 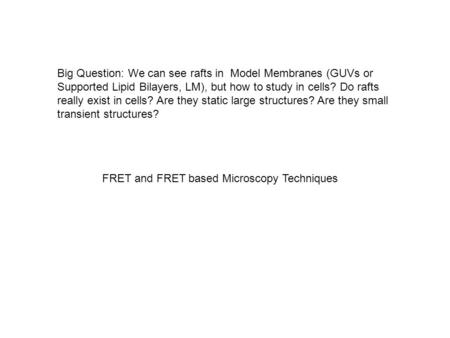 Big Question: We can see rafts in Model Membranes (GUVs or Supported Lipid Bilayers, LM), but how to study in cells? Do rafts really exist in cells? Are. 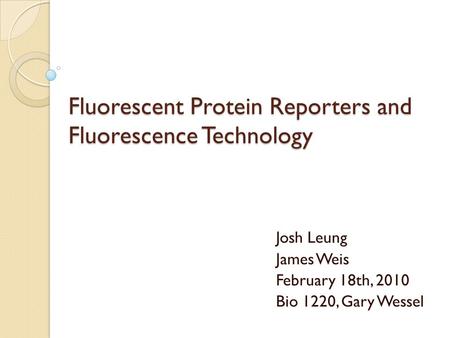 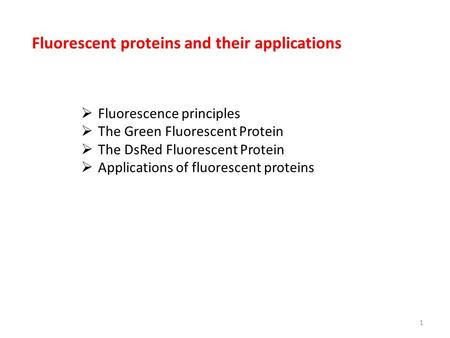 Fluorescent proteins and their applications 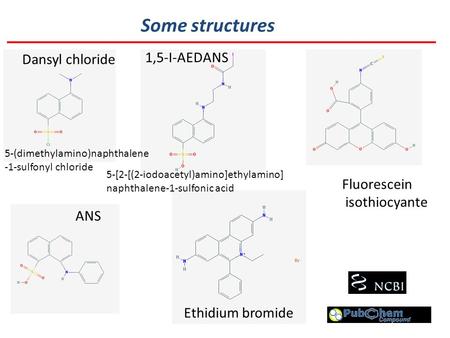 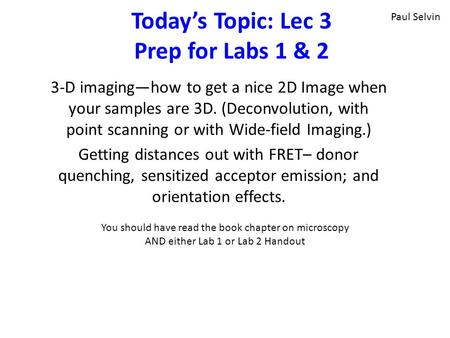 Today’s Topic: Lec 3 Prep for Labs 1 & 2 3-D imaging—how to get a nice 2D Image when your samples are 3D. (Deconvolution, with point scanning or with Wide-field. 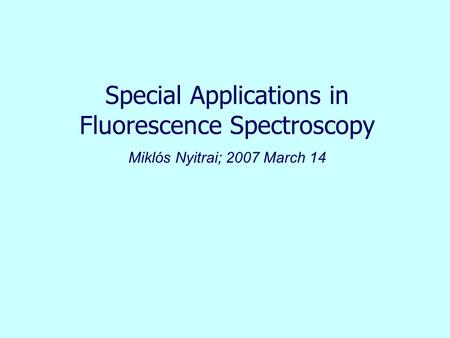 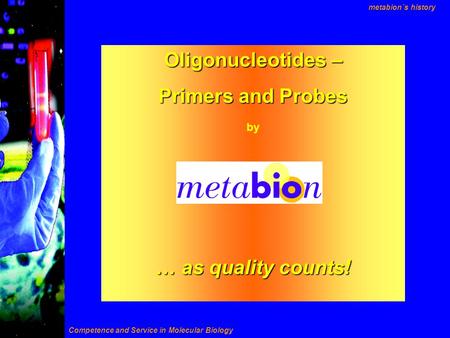 Oligonucleotides – Primers and Probes by … as quality counts! Competence and Service in Molecular Biology metabion´s history. 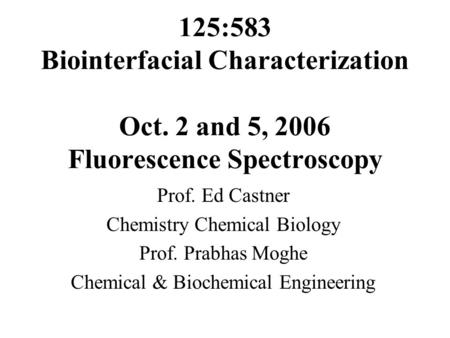 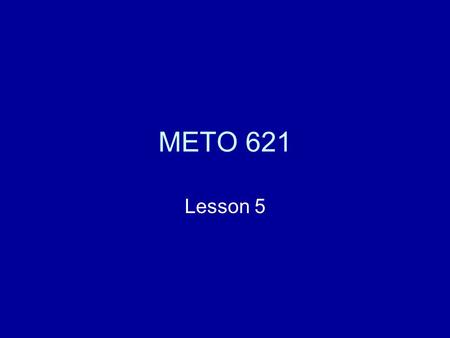 METO 621 Lesson 5. Natural broadening The line width (full width at half maximum) of the Lorentz profile is the damping parameter, . For an isolated. 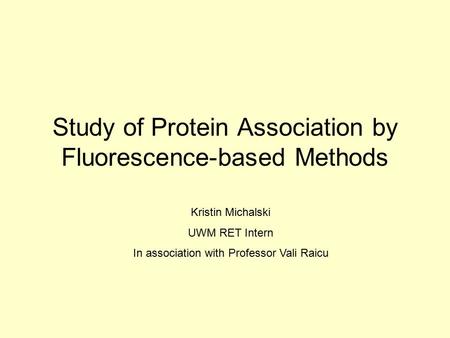 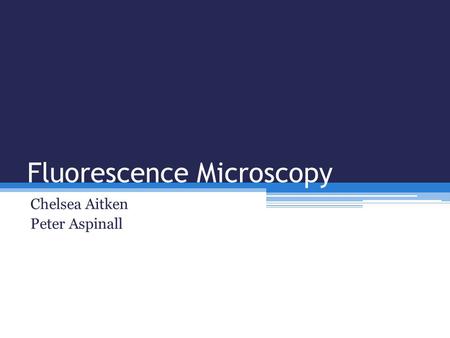 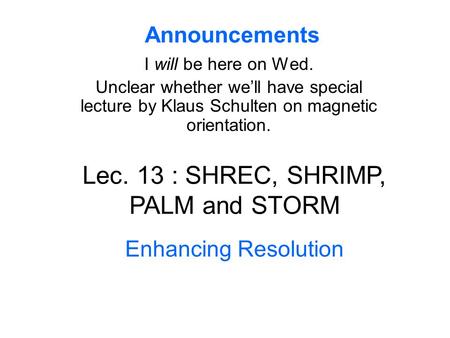 Announcements I will be here on Wed. Unclear whether we’ll have special lecture by Klaus Schulten on magnetic orientation. Lec. 13 : SHREC, SHRIMP, PALM. 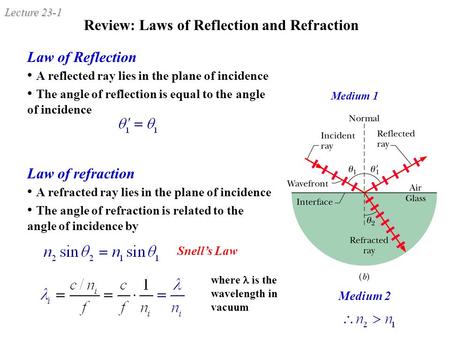 Review: Laws of Reflection and Refraction 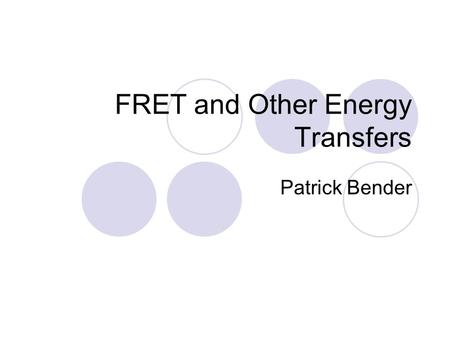 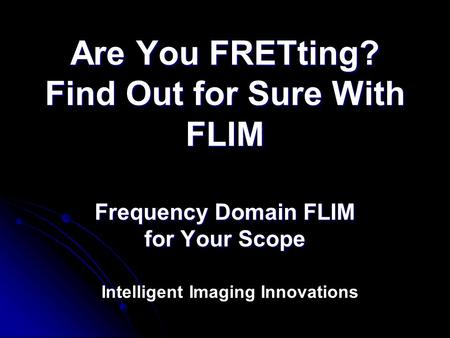 Are You FRETting? Find Out for Sure With FLIM Frequency Domain FLIM for Your Scope Intelligent Imaging Innovations. 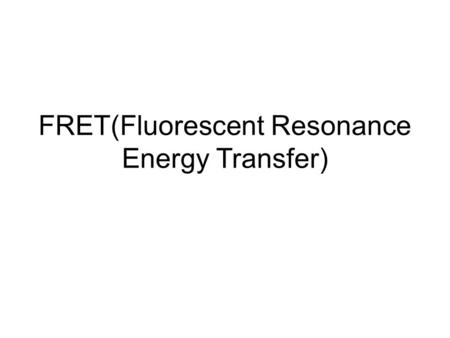