2 Anticipatory Set What are some factors that led to the destruction of other empires you have studied?

5 Big Idea Unstable government, high taxes, and splitting the empire in two all contributed to the fall of the Roman Empire

7 Unstable Government The decline began with a series of weak emperors
Commodus (Marcus’ son) was corrupt In the 50 years after AD 235, there were 21 emperors!

9 Price Inflation Emperors tried to increase the money supply by issuing coins made of less precious metal As a result, merchants raised their prices Inflation Inflation hurt commerce, and made it difficult to supply the army

12 Constantine’s New Capital
A military officer named Constantine defeated his rivals to become ruler after Diocletian’s death In 330, began work on an impressive new capital which is now Turkey He built his “New Rome” on the site of an old Greek city called Byzantium After his death the city was renamed Constantinople

15 The Germans Two great rivers, The Rhine and the Danube, marked the northern and eastern boundaries of the Roman Empire in Europe Romans called the people living past these frontiers “Germans” By the time of Constantine, thousands of Germans had joined the Roman army

16 Barbarians on the Move The crisis that would test the Roman Empire’s border legions came from the Huns of Central Asia In the 300s, the Huns conquered northern China Then they turned towards Europe Germans fled in terror

17 Barbarians on the Move In 376, the Goths crossed the Danube, entering the empire When the Romans tried to drive them back, they were badly defeated Other groups followed, and the western provinces were taken over by peoples who set up their own Germanic kingdoms

18 The Fall of Rome In time, Rome itself came under attack
Visigoths invaded Rome in 410 and looted the city In 455, Vandals attached Rome a second time Their raid was so destructive that we still use the term “vandalize”

19 The Fall of Rome Rome never recovered from these attacks
Historians have used the date 476 to mark the fall of the Roman Empire However, Roman peace, order, and government had collapsed long before that date

21 Check For Understanding
What were Rome’s economic problems?

23 Guided Practice How did economic problems affect the poor in Roman society? 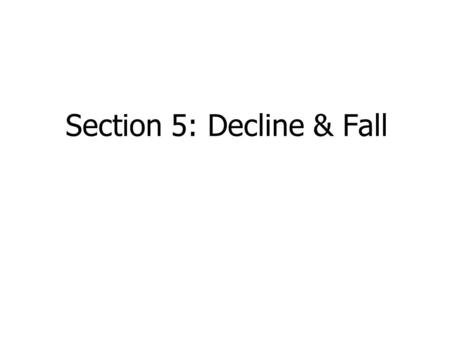 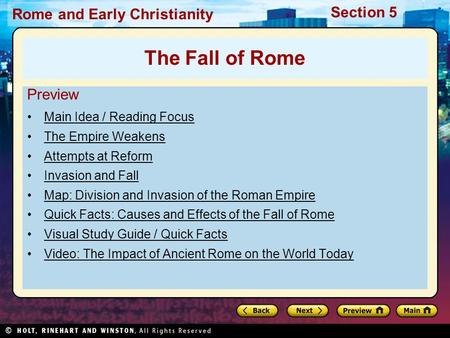 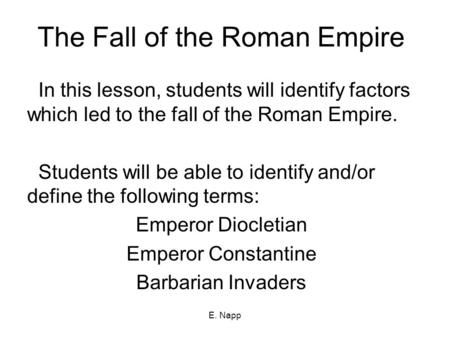 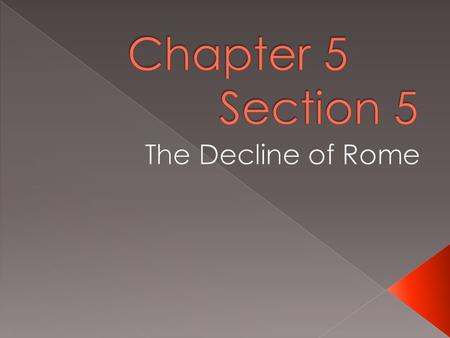 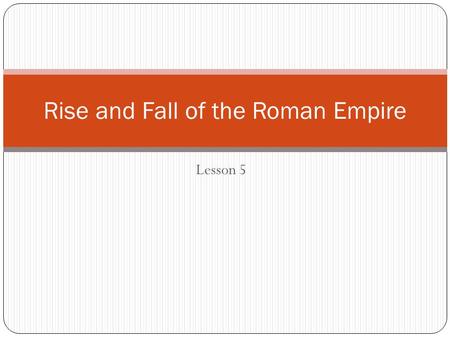 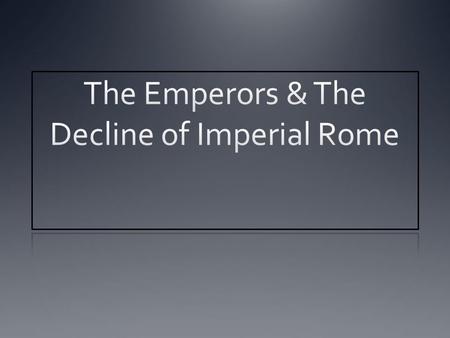 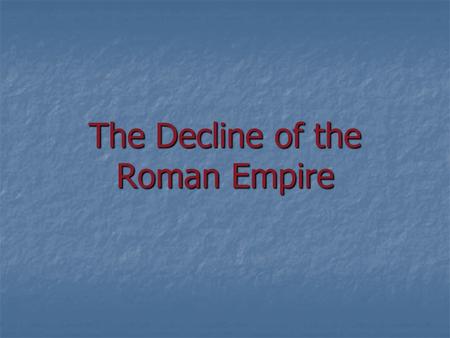