1 Chapter 27: The Scramble for Africa
Sections 1-2

3 Do Now: How does this political cartoon represent imperialism in Africa? Who do you think the snake represents? Why? Create a title for this cartoon.

5 The Congo Sparks Interest
King Leopold II ________________of Belgium commissioned the explorer Henry Stanley to secure agreements from the tribes who inhabited the Congo Basin in Africa. Stanley did so through a combination of promises, threats and trickery. In 1882 a treaty was signed with local chiefs of the Congo River valley. The treaties gave King Leopold II of Belgium personal control over the land.

6 Abuses of the Native Congolese People
Leopold licensed companies that brutally exploited Africans, by forcing them to collect sap from rubber plants. Africans harvesting rubber in the Congo.

7 The system was unusually exploitative and brutal, even in Colonial Africa. Whipping was a common form of punishment for workers who did not meet their quotas or who disobeyed the white man's rules.

9 The World Demanded Changes
Much of Europe frowned upon these atrocities, which led to the end of Leopold's rule of the basin. His financial backing eroded to the point that Leopold required loans from the Belgian government. In 1908 Belgium took the lands for itself as the Belgian Congo. Many of the hardships of the natives were reduced and living conditions were improved.

10 Forces Driving Imperialism
Belief in European Superiority • Race for colonies grows out of national pride • Racism—belief that one race is better than others • Social Darwinism—survival of the fittest applied to human society Factors Promoting Imperialism in Africa • Technological inventions like steam engine, Maxim gun help conquest • Perfection of quinine protects Europeans from malaria • Within Africa, Africans are divided by language and culture NEXT

11 The Division of Africa The Lure of Wealth
• Discovery of gold and diamonds increases interest in colonization Berlin Conference Divides Africa • Berlin Conference—14 nations agree on rules for division (1884–85): - countries must claim land and prove ability to control it • By 1914, only Liberia and Ethiopia are free of European control  Demand for Raw Materials Shapes Colonies • Raw materials are greatest source of wealth in Africa • Businesses develop cash-crop plantations NEXT

13 Section 2 Imperialism CASE STUDY: Nigeria Europeans embark on a new phase of empire building that affects both Africa and the rest of the world. NEXT

19 Observing this photo, what are some of the positive and negative aspects of Imperialism? 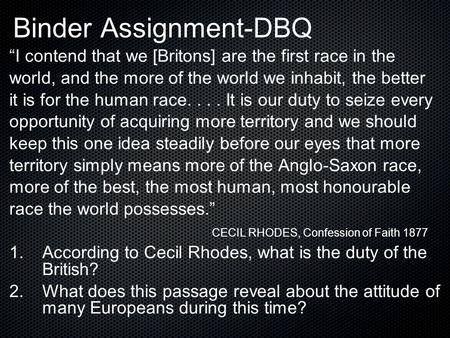 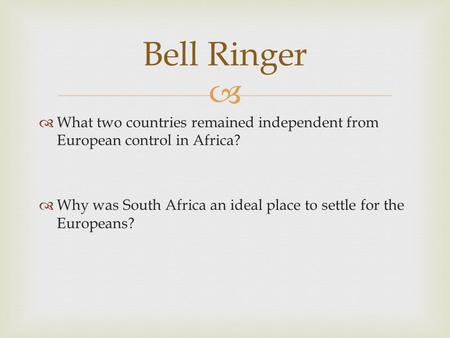 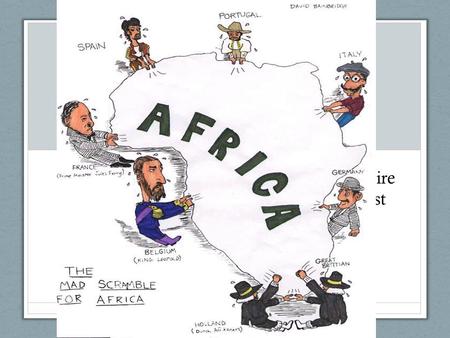 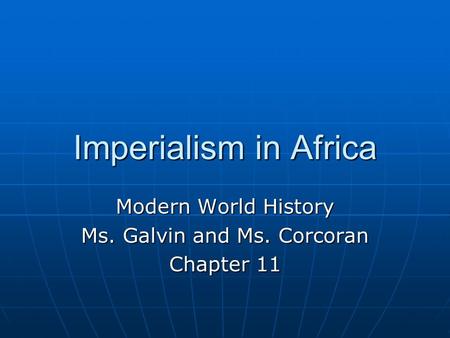