2 Summary: mirrors Sign conventions: + on the left - on the right Convex and plane mirrors: only virtual images (for real objects) Concave: real images, virtual only when the object is very close to the mirror (d o <f) Virtual images are upright Real images are inverted A plane mirror is a spherical mirror with 1/f=0: d i =-d o, m=1 When the object is near F, the image forms at infinity

3 25.3 The Formation of Images by a Plane Mirror Conceptual Example 1 Full-Length Versus Half-Length Mirrors What is the minimum mirror height necessary for her to see her full image?

7 25.6 The Mirror Equation and Magnification Example 5 A Virtual Image Formed by a Convex Mirror A convex mirror is used to reflect light from an object placed 66 cm in front of the mirror. The focal length of the mirror is -46 cm. Find the location of the image and the magnification. AF 3613

9 Images Formed by Refraction Consider two transparent media having indices of refraction n 1 and n 2. The boundary between the two media is a spherical surface of radius R. Rays originate from the object at point O in the medium with n = n 1. Section 36.3

10 Images Formed by Refraction, 2 We will consider the paraxial rays leaving O. All such rays are refracted at the spherical surface and focus at the image point, I. The relationship between object and image distances can be given by Section 36.3

12 Images Formed by Refraction, 3 The side of the surface in which the light rays originate is defined as the front side. The other side is called the back side. Real images are formed by refraction in the back of the surface.  Because of this, the sign conventions for q and R for refracting surfaces are opposite those for reflecting surfaces. Section 36.3

15 Images Formed by Thin Lenses Lenses are commonly used to form images by refraction. Lenses are used in optical instruments.  Cameras  Telescopes  Microscopes Light passing through a lens experiences refraction at two surfaces. The image formed by one refracting surface serves as the object for the second surface. Section 36.4

16 Thin Lens Equation The relationship among the focal length, the object distance and the image distance is the same as for a mirror. Section 36.4 pq

19 Focal Length of a Diverging Lens The parallel rays diverge after passing through the diverging lens. The focal point is the point where the rays appear to have originated. Section 36.4

20 Determining Signs for Thin Lenses The front side of the thin lens is the side of the incident light. The light is refracted into the back side of the lens. This is also valid for a refracting surface. Section 36.4

23 Thin Lens Shapes These are examples of converging lenses. They have positive focal lengths. They are thickest in the middle. Section 36.4

24 More Thin Lens Shapes These are examples of diverging lenses. They have negative focal lengths. They are thickest at the edges. Section 36.4

29 Ray Diagrams for Thin Lenses – Diverging For a diverging lens, the following three rays are drawn:  Ray 1 is drawn parallel to the principal axis and emerges directed away from the focal point on the front side of the lens.  Ray 2 is drawn through the center of the lens and continues in a straight line.  Ray 3 is drawn in the direction toward the focal point on the back side of the lens and emerges from the lens parallel to the principal axis. Section 36.4

32 Example 9 The Real Image Formed by a Camera Lens A 1.70-m tall person is standing 2.50 m in front of a camera. The camera uses a converging lens whose focal length is 0.0500 m. (a)Find the image distance and determine whether the image is real or virtual. (b) Find the magnification and height of the image on the film. (a) real image (b) 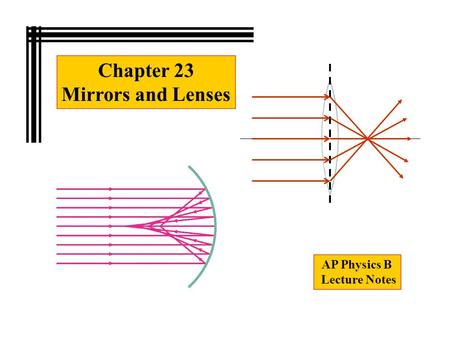 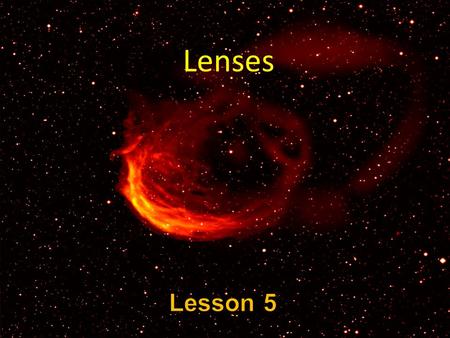 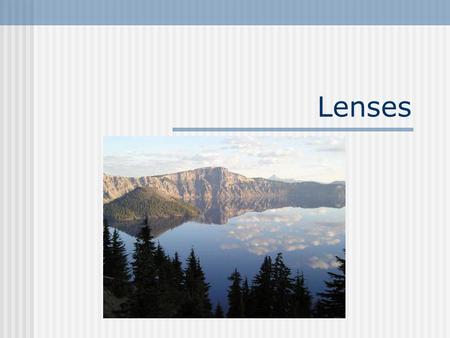 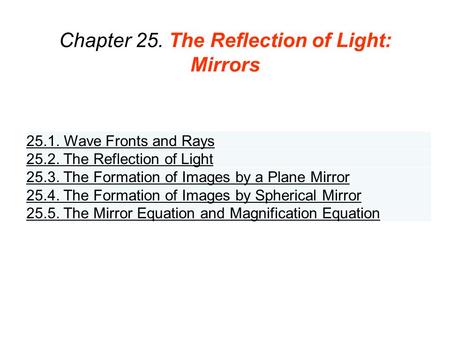 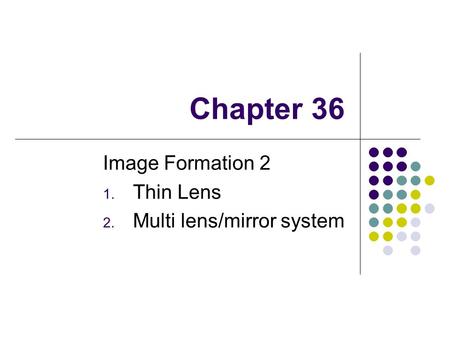 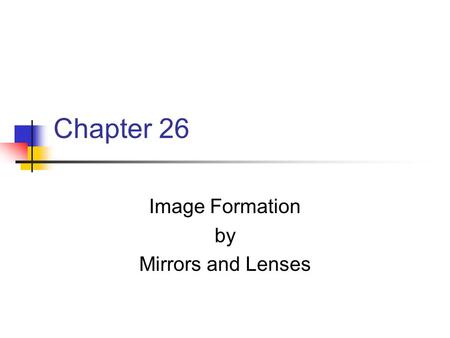 Image Formation by Mirrors and Lenses