4 Flat Mirror Simplest possible mirror
Properties of the image can be determined by geometry One ray starts at P, follows path PQ and reflects back on itself A second ray follows path PR and reflects according to the Law of Reflection Demo

6 Concave Mirror, Notation
The mirror has a radius of curvature of R Its center of curvature is the point C Point V is the center of the spherical segment A line drawn from C to V is called the principle axis of the mirror

11 Focal Point and Focal Length, cont
The focal point is dependent solely on the curvature of the mirror, not by the location of the object f = R / 2 The mirror equation can be expressed as Demo

14 Convex Mirrors A convex mirror is sometimes called a diverging mirror
The rays from any point on the object diverge after reflection as though they were coming from some point behind the mirror The image is virtual because it lies behind the mirror at the point where the reflected rays appear to originate In general, the image formed by a convex mirror is upright, virtual, and smaller than the object

15 Image Formed by a Convex Mirror

21 Ray Diagram for Concave Mirror, p > R
The object is outside the center of curvature of the mirror Demo The image is real The image is inverted The image is smaller than the object

22 Ray Diagram for a Concave Mirror, p < f
The object is between the mirror and the focal point Demo The image is virtual The image is upright The image is larger than the object

28 Thin Lenses A thin lens consists of a piece of glass or plastic, ground so that each of its two refracting surfaces is a segment of either a sphere or a plane Lenses are commonly used to form images by refraction in optical instruments

31 Focal Length of Lenses The focal length, ƒ, is the image distance that corresponds to an infinite object distance This is the same as for mirrors A thin lens has two focal points, corresponding to parallel rays from the left and from the right A thin lens is one in which the distance between the surface of the lens and the center of the lens is negligible

38 Ray Diagrams for Thin Lenses
Ray diagrams are essential for understanding the overall image formation Three rays are drawn The first ray is drawn parallel to the first principle axis and then passes through (or appears to come from) one of the focal lengths The second ray is drawn through the center of the lens and continues in a straight line The third ray is drawn from the other focal point and emerges from the lens parallel to the principle axis There are an infinite number of rays, these are convenient 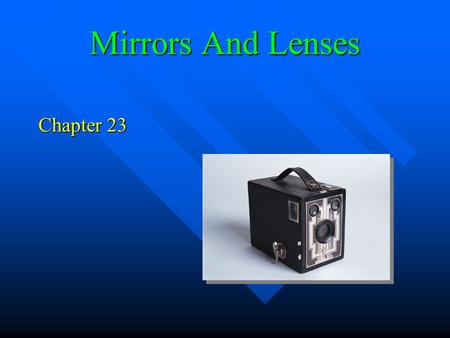 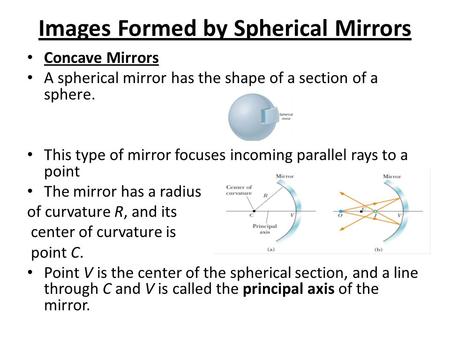