1 Heating the Earth Air Pressure
Energy From the Sun

2 Where We Get Our Energy The Sun is a major source of energy for Earth.
You can feel the radiant energy warming your skin Radiation- movement of energy through empty space

4 Absorption of Energy Dark surfaces absorb light, and it is usually changed into heat Surfaces that reflect light, such as white, remain cooler

5 Conduction The troposphere is heated by moving heat through matter
How does heat move through a metal pan? Conduction- heat moves from an area of higher temperature to area of lower temperature

8 Forms of Energy Let’s look at this animation for radiation, conduction, and convection

10 What is Air Pressure? Pressure- the amount of force per unit of area
Weight- weight (force) is measured in Newtons Ex.- Holding a book (pg. 260) Force over small area causes more pressure than a large area

13 Water Vapor Water evaporates from lakes, rivers, and oceans
Water vapor molecules are lighter than other gas molecules So, more water vapor in air, the lower the air pressure

14 Measuring Air Pressure
Barometer- air pressure is measured with this instrument Air pressure pushes down on the surface of the mercury in the containter Standard air pressure- 760 mm of mercury or 1 atmosphere or 1, mb

16 How do Winds Form? Wind- the horizontal movement of air along Earth’s surface Earth’s atmosphere is always in motion Winds form as cool, heavy air moves toward warm, light air Cool air moves along the surface toward warmer air

27 Sea Breeze During the day, air over land is warmer and lighter than air over water The cooler, heavier air over the ocean moves in toward the land The result is a sea breeze

29 Land Breeze At night, land cools faster than water
Air over land becomes cooler than the air Heavier air over the land moves toward the water Warmer, lighter air rises over the land 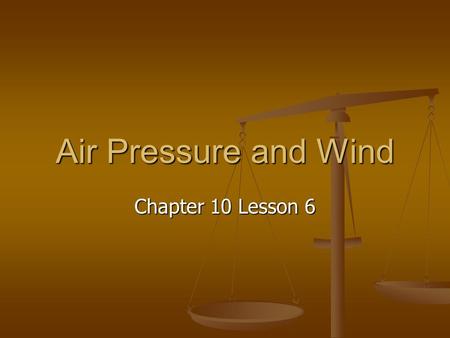