2 Vincent Van Gogh Born in Holland Art and religion were the two occupations to which the Van Gogh family gravitated. He went to Paris at 16 to assist an art dealer, began making sketches, and his interest in art began. For a time, he served as a missionary in England and Holland, but he eventually was expelled from the mission.

3 Vincent Van Gogh He decided to become an artist and studied at The Academic Art School at The Hague; where his cousin Anton Mauve taught. He began to paint gloomy scenes of thatched huts, peasants and workers. His brother Theo was his source of financial and emotional support. Theo sent money to Vincent for food, paint and canvas and tried to sell Vincent’s paintings. He also wrote him many letters of encouragement. « La chambre de Van Gogh à Arles » (Van Gogh's Room at Arles)

4 Vincent Van Gogh In 1886 he moved in with his brother in Paris. He met the leaders of Impressionism Claude Monet Camille Pissarro Paul Gauguin Georges Seurat. « Wheatfield With Cypresses »

5 Vincent Van Gogh He began painting prolifically in his own style characterized by lively brushstrokes and bright, clashing colors. Among his best-known works are The Potato Eaters (1885), Starry Night (1889), and Irises (1889). During this time he was suffering from depression and had hallucinations. « The Potato Eaters »

6 Vincent Van Gogh’s Art Productive period lasted 10 years (His most popular pieces of work were created in the last 3 years of his life) Produced more than 2000 pieces of artwork, 900 paintings & 1100+ drawings and sketches Mostly self taught Not very famous DURING his life Guess how many paintings sold during his life? Paintings sold after his death? For how much? His work had a powerful influence on the development of modern painting, and he is considered the greatest Dutch painter since Rembrandt.. He is now regarded as one of the most profoundly influential artists of the 19th century.

7 Vocabulary Horizon A level line where water or land seems to end and the sky begins. It is usually on the eye level of the observer. If the horizon cannot be seen, its placement must be imagined. Perspective Techniques for creating the illusion of depth on a two-dimensional surface. Mood The feeling or emotion created What mood do you think is depicted with this painting? « Three Pairs of Shoes »

8 Vocabulary Impressionism A style of painting among French artists in the 1870’s and 1880’s that depicted the natural appearances of objects by means of dabs or strokes of primary unmixed colors in order to simulate actual reflected light. Post-Impressionism A style of painting among French artists from 1886 to 1914 that places a greater emphasis on structure and form and rejecting the naturalism of the Impressionists. « The Café Terrace on the Place du Forum, Arles, at Night »

9 More on Post-Impressionism Originating in France in 1886 – 1914 Artists include Vincent Van Gogh Paul Gaugin Georges Seurat Henri de Toulouse-Lautrec Distinctive brushstrokes and thick application of paint Dabs of vivid color Impressionist did NOT use black Short and wide lines; and Pointillism Emotional connection with the subject rather than its true appearance Unmixed primary colors that are applied side by side; the eye of the viewer optically mixes upon viewing Depiction of light in its ever changing qualities; natural light emphasized

12 Starry Night What is the mood of the painting? Which elements help to set it?

13 The Olive Trees What does the use of color do to create mood? How does it make you feel?

14 Red Vineyard in Arles How does the color here change the mood as in previous examples? How do you think Van Gough was feeling when he painted this?

15 Peach Blossom in the Crau What is his use of space? What was Van Gogh’s state of mind while painting this?

16 Peach Blossom in the Crau Painted this landscape in 1988 during his Arles period, when he used the Japanese style of making people and objects appear small in composing his landscapes. The horizon line is just above the middle of the painting. The blooming trees symbolize his optimism, wishes and desires. He used the Impressionist style in applying the paint in dabbing brushstrokes of thick paint.

17 Van Gogh Quotes “What would life be if we had no courage to attempt anything?” "Painting is a faith, and it imposes the duty to disregard public opinion.“ “A good picture is equivalent to a good deed. “ “Paintings have a life of their own that derives from the painter's soul.” “Happiness... it lies in the joy of achievement, in the thrill of creative effort.“

18 Van Gogh Quotes “Great things are not done by impulse, but by a series of small things brought together. “ “Love many things, for therein lies the true strength, and whosoever loves much performs much, and can accomplish much, and what is done in love is done well.” “I feel that there is nothing more truly artistic than to love people.” “It is not the language of painters but the language of nature which one should listen to.... The feeling for the things themselves, for reality, is more important than the feeling for pictures. “

19 Today’s Lesson You will create a landscape painting using Van Gogh’s style of straight brushstrokes and perspective. Decide on mood and color scheme for your landscape. What color will you use to create the mood? First draw a light line on the paper to represent the horizon, then lightly sketch in the remainder of the landscape. Objects grow smaller toward the back of the painting (perspective) Paint the landscape in a style that will support the mood. 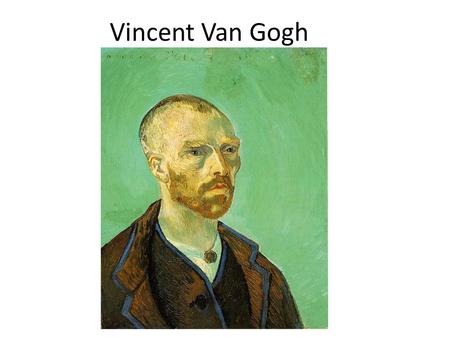 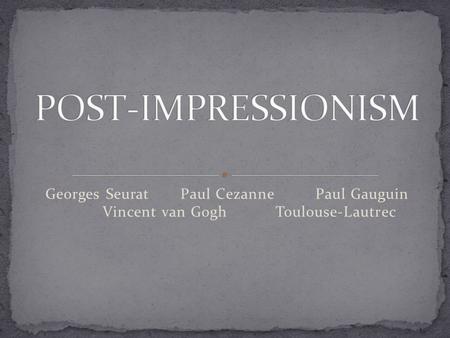