Magnetic Forces. Forces in Magnetism The existence of magnetic fields is known because of their affects on moving charges. What is magnetic force (F B.

Presentation on theme: "Magnetic Forces. Forces in Magnetism The existence of magnetic fields is known because of their affects on moving charges. What is magnetic force (F B."— Presentation transcript:

4 Example #1 A positively charged particle traveling at 7.5 x 10 5 meters per second enters a uniform magnetic field perpendicular to the lines of force. While in the 4.0 x 10 -2 tesla magnetic field, a net force of 9.6 x 10 -15 newton acts on the particle. What is the magnitude of the charge on the particle?

5 What is the magnetic field (B)? The magnetic field is a force field just like electric and gravitational fields. It is a vector quantity. Hence, it has both magnitude and direction. Magnetic fields are similar to electric fields in that the field intensity is directly proportional to the force and inversely related to the charge. E = F E /q B = F B /(|q|v) Units for B: Ns/Cm = 1 Tesla

6 Right Hand Rules Right hand rule is used to determine the relationship between the magnetic field, the velocity of a positively charged particle and the resulting force it experiences.

8 The Lorentz Force Equation & RHR What is the direction of force on the particle by the magnetic field? a.Right b. Left c. Up d. Down e.Into the page f. Out of the Page V + Uniform B θ vsinθ q F B = qvB sinθ Note: Only the component of velocity perpendicular to the magnetic field (vsin) will contribute to the force.

9 Right Hand Rule – What is the Force? x x x + v What is the direction of the magnetic force on the charge? a) Down b) Up c) Right d)Left

11 Right Hand Rule – What is the Direction of B What is the direction of the magnetic field in each chamber? a.Up b.Down c.Left d.Right e.Into Page f.Out of Page 1 2 3 4 What is the speed of the particle when it leaves chamber 4? a.v/2b. -v c.vd. 2v Since the magnetic force is always perpendicular to the velocity, it cannot do any work and change its KE.

12 Two protons are launched into a magnetic field with the same speed as shown. What is the difference in magnitude of the magnetic force on each particle? a. F 1 F 2 Example 2: Lorentz Force x x v2v2 + + v1v1 F = qv x B = qvBsinθ Since the angle between B and the particles is 90 o in both cases, F 1 = F 2. How does the kinetic energy change once the particle is in the B field? a. Increase b. Decrease c. Stays the Same Since the magnetic force is always perpendicular to the velocity, it cannot do any work and change its KE.

13 Trajectory of a Charge in a Constant Magnetic Field What path will a charge take when it enters a constant magnetic field with a velocity v as shown below? x x x + v  Since the force is always perpendicular to the v and B, the particle will travel in a circle  Hence, the force is a centripetal force.

25 Torque on a Current Carrying Coil (cont.) What is the contribution of forces from the two shorter sides (w)? F = IwB sin (90 o – ) Note 1:  is the angle that the normal to the wire makes with the direction of the magnetic field. Note 2: Due to symmetry, the forces on the two shorter sides will cancel each other out (Use RHR #1). L w I Axis of rotation X X

26 Torque on a Current Carrying Coil (cont.) What is the contribution of torque from the two longer sides (L)? F = BIL for each side since L is always perpendicular to B. The magnitude of the torque due to these forces is:  = BIL (½w sin) + BIL (½w sin) = BILw sin(1) Note: Since Lw = the area of the loop (A), (1) reduces to:  = IAB sin For a winding with N turns, this formula can be rewritten:  = NIAB sin

27 DC Motor DC Electric Motor Armature – Part of the motor that spins that contains windings and an iron core. External Magnetic Field – Electromagnet or permanent magnet that provides an attractive and repulsive force to drive armature. Split Ring Commutator – Brushes and split ring that provide the electrical connection to the armature from the external electrical source.

Download ppt "Magnetic Forces. Forces in Magnetism The existence of magnetic fields is known because of their affects on moving charges. What is magnetic force (F B." 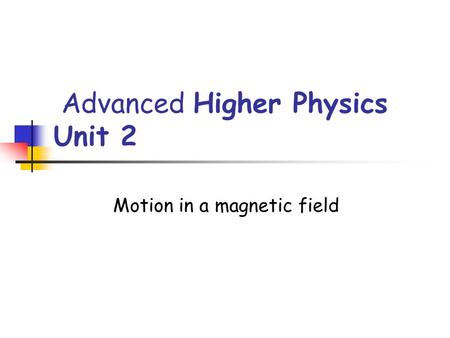 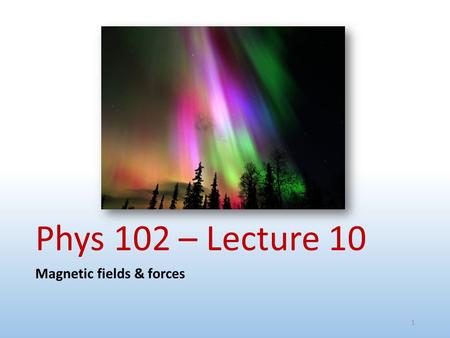 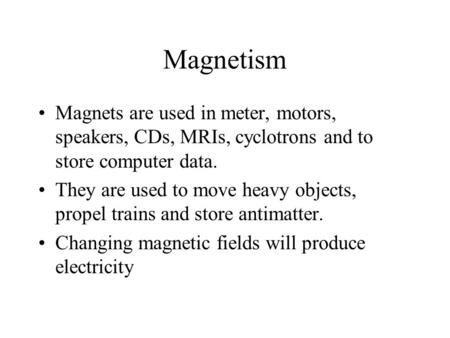 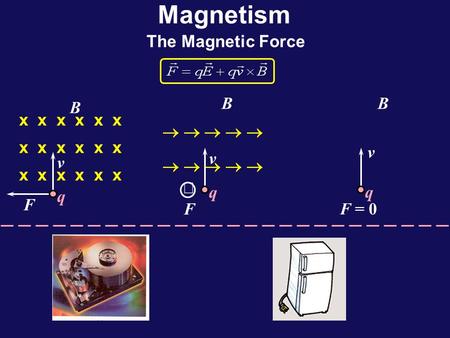 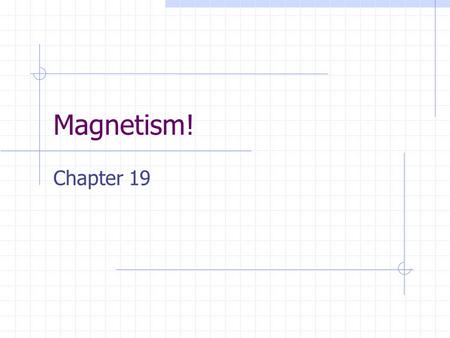 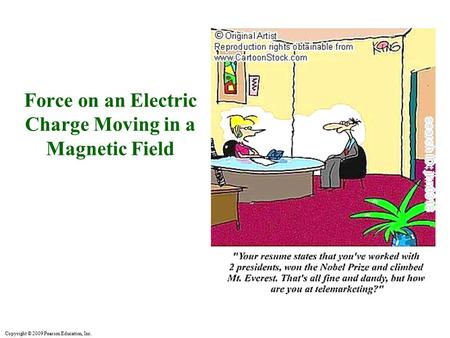 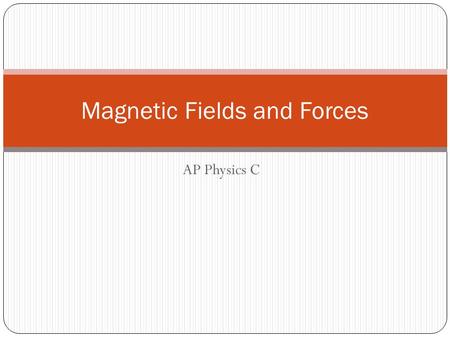 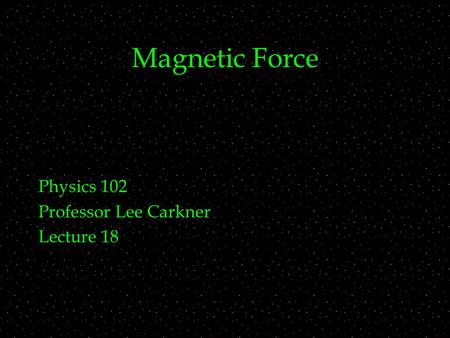 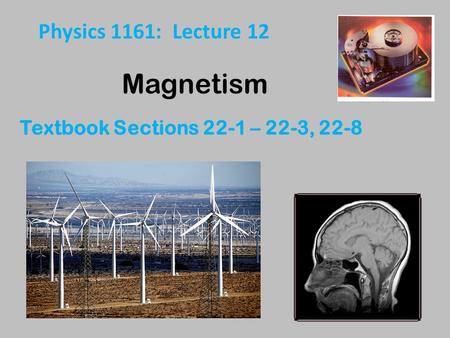 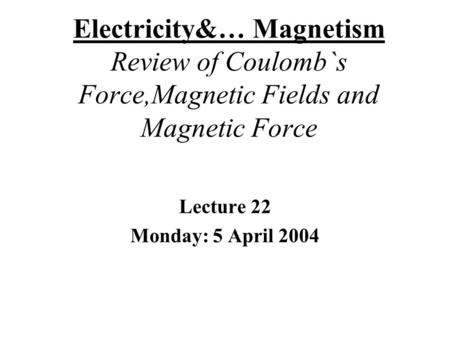 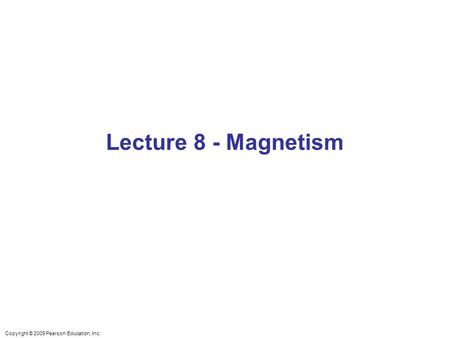 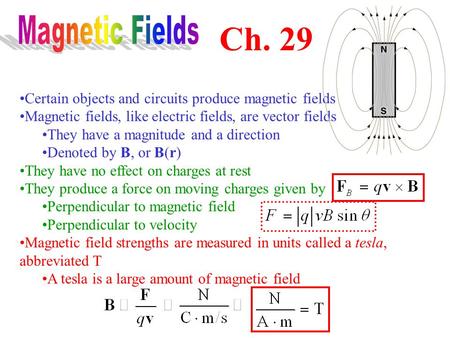 Certain objects and circuits produce magnetic fields Magnetic fields, like electric fields, are vector fields They have a magnitude and a direction Denoted. 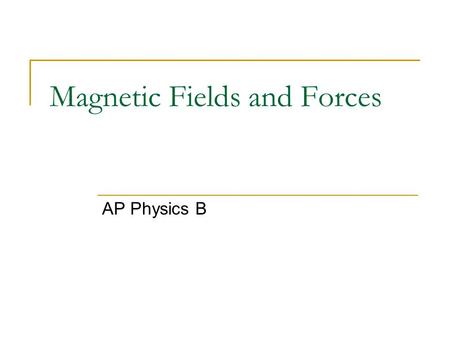 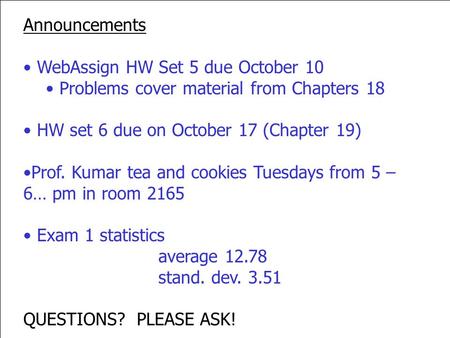 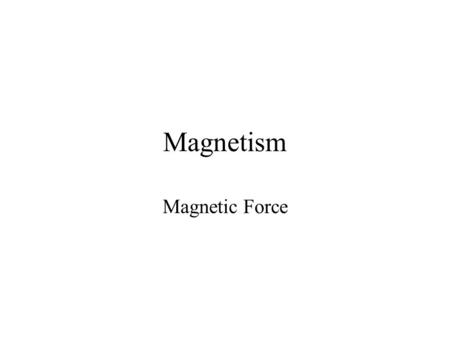 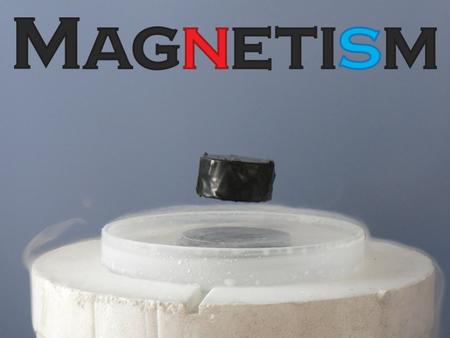 Whiteboard Warmup! A beam of electrons is being fired to the right, when a magnet is pointed toward the beam and brought closer. As a result, the beam. 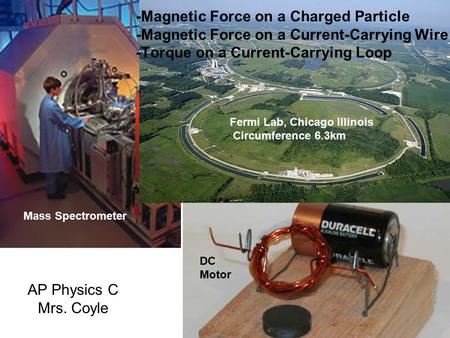