2 The Chemistry of Carbon
Carbon atoms can form strong covalent bonds with many other elements. Molecules containing carbon are called organic. Living organisms are composed of molecules consisting of carbon bonded to other elements.

5 Macromolecules The smaller units, or monomers, join together to form polymers. The monomers in a polymer may be identical or different.

10 Complex Carbohydrates
polysaccharides - sugars formed by joining many monosaccharides together.

12 Lipids Lipids - made mostly from carbon, hydrogen, and oxygen
- generally not soluble in water. categories of lipids: 1. fats 2. oils 3. waxes

15 Lipids Lipids used to store energy.
Some are parts of biological membranes and waterproof coverings. Many steroids, such as hormones, are lipids and serve as chemical messengers.

19 Protein Proteins - made of nitrogen, carbon, hydrogen, and oxygen.
Proteins are polymers made of monomers called amino acids. Proteins perform many varied functions, such as controlling the rate of reactions and regulating cell processes, forming cellular structures, transporting substances into or out of cells, and helping to fight disease.

20 Protein Amino acids - compounds with amino group (–NH2) on one end and carboxyl group (–COOH) on the other end. - More than 20 different amino acids are found in nature Peptide bonds link amino acids together to form a polypeptide. Protein - functional molecule built from one or more polypeptides.

21 Levels of Organization
Proteins have four levels of structure. 1. Primary structure - the sequence of amino acids. 2. Secondary structure - folding or coiling of the polypeptide chain. 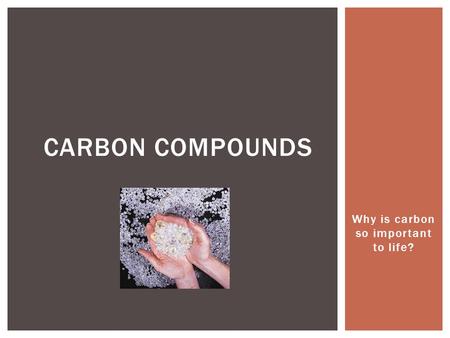