Presentation on theme: "SOLVING SYSTEMS OF LINEAR EQUATIONS. Overview A matrix consists of a rectangular array of elements represented by a single symbol (example: [A]). An individual."— Presentation transcript:

2 Overview A matrix consists of a rectangular array of elements represented by a single symbol (example: [A]). An individual entry of a matrix is an element (example: a 23 )

3 Overview (cont) A horizontal set of elements is called a row and a vertical set of elements is called a column. The first subscript of an element indicates the row while the second indicates the column. The size of a matrix is given as m rows by n columns, or simply m by n (or m x n). 1 x n matrices are row vectors. m x 1 matrices are column vectors.

5 Matrix Operations Two matrices are considered equal if and only if every element in the first matrix is equal to every corresponding element in the second. This means the two matrices must be the same size. Matrix addition and subtraction are performed by adding or subtracting the corresponding elements. This requires that the two matrices be the same size. Scalar matrix multiplication is performed by multiplying each element by the same scalar.

6 Matrix Multiplication The elements in the matrix [C] that results from multiplying matrices [A] and [B] are calculated using:

7 Matrix Inverse and Transpose The inverse of a square, nonsingular matrix [A] is that matrix which, when multiplied by [A], yields the identity matrix. – [A][A] -1 =[A] -1 [A]=[I] The transpose of a matrix involves transforming its rows into columns and its columns into rows. – (a ij ) T =a ji

10 Graphical Method For small sets of simultaneous equations, graphing them and determining the location of the intercept provides a solution.

13 Cramer’s Rule Cramer’s Rule states that each unknown in a system of linear algebraic equations may be expressed as a fraction of two determinants with denominator D and with the numerator obtained from D by replacing the column of coefficients of the unknown in question by the constants b 1, b 2, …, b n.

15 Naïve Gauss Elimination For larger systems, Cramer’s Rule can become unwieldy. Instead, a sequential process of removing unknowns from equations using forward elimination followed by back substitution may be used - this is Gauss elimination. “Naïve” Gauss elimination simply means the process does not check for potential problems resulting from division by zero.

16 Naïve Gauss Elimination (cont) Forward elimination – Starting with the first row, add or subtract multiples of that row to eliminate the first coefficient from the second row and beyond. – Continue this process with the second row to remove the second coefficient from the third row and beyond. – Stop when an upper triangular matrix remains. Back substitution – Starting with the last row, solve for the unknown, then substitute that value into the next highest row. – Because of the upper-triangular nature of the matrix, each row will contain only one more unknown.

20 Pivoting Problems arise with naïve Gauss elimination if a coefficient along the diagonal is 0 (problem: division by 0) or close to 0 (problem: round-off error) One way to combat these issues is to determine the coefficient with the largest absolute value in the column below the pivot element. The rows can then be switched so that the largest element is the pivot element. This is called partial pivoting. If the rows to the right of the pivot element are also checked and columns switched, this is called complete pivoting.

26 Cholesky Factorization Symmetric systems occur commonly in both mathematical and engineering/science problem contexts, and there are special solution techniques available for such systems. The Cholesky factorization is one of the most popular of these techniques, and is based on the fact that a symmetric matrix can be decomposed as [A]= [U] T [U], where T stands for transpose. The rest of the process is similar to LU decomposition and Gauss elimination, except only one matrix, [U], needs to be stored.

28 MATLAB MATLAB can perform a Cholesky factorization with the built-in chol command: U = chol(A) MATLAB’s left division operator \ examines the system to see which method will most efficiently solve the problem. This includes trying banded solvers, back and forward substitutions, Cholesky factorization for symmetric systems. If these do not work and the system is square, Gauss elimination with partial pivoting is used.

30 Gauss-Seidel Method The Gauss-Seidel method is the most commonly used iterative method for solving linear algebraic equations [A]{x}={b}. The method solves each equation in a system for a particular variable, and then uses that value in later equations to solve later variables. For a 3x3 system with nonzero elements along the diagonal, for example, the j th iteration values are found from the j-1 th iteration using:

31 Jacobi Iteration The Jacobi iteration is similar to the Gauss- Seidel method, except the j-1th information is used to update all variables in the jth iteration: a)Gauss-Seidel b)Jacobi

32 Convergence The convergence of an iterative method can be calculated by determining the relative percent change of each element in {x}. For example, for the i th element in the j th iteration, The method is ended when all elements have converged to a set tolerance.

Download ppt "SOLVING SYSTEMS OF LINEAR EQUATIONS. Overview A matrix consists of a rectangular array of elements represented by a single symbol (example: [A]). An individual." 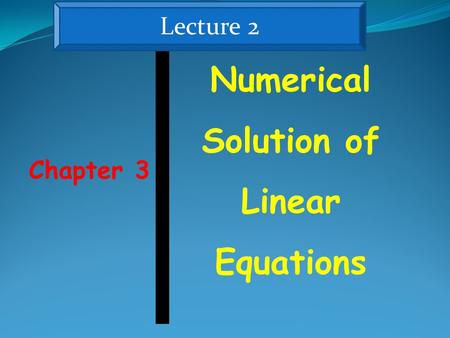 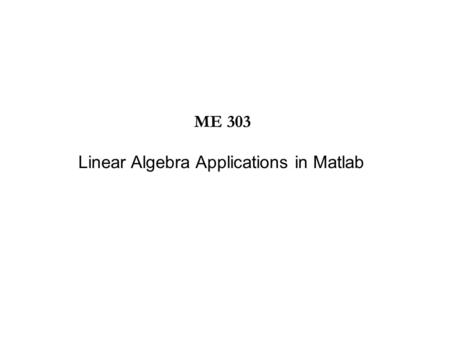 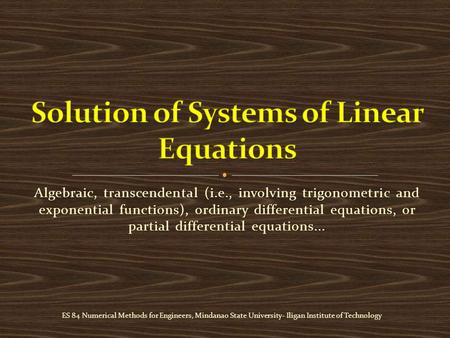 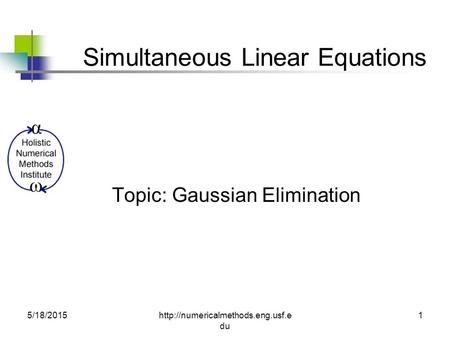 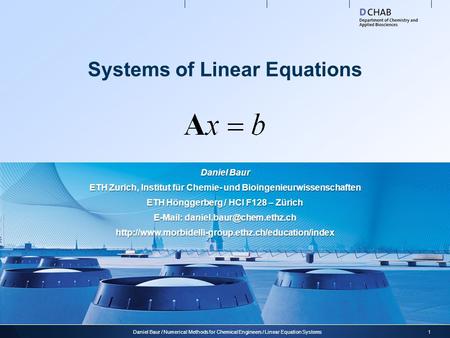 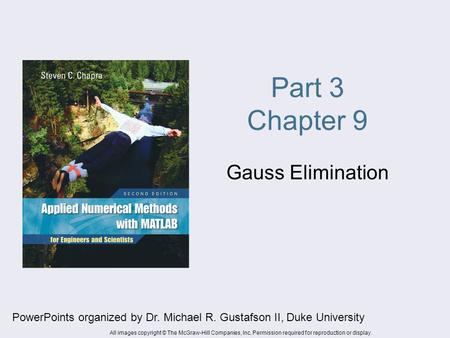 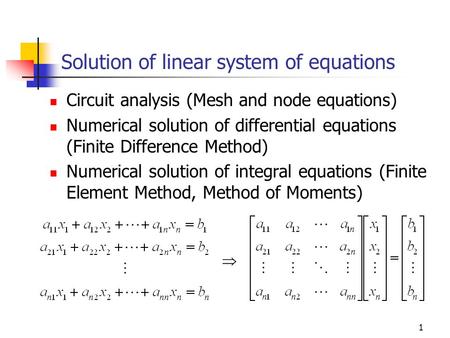 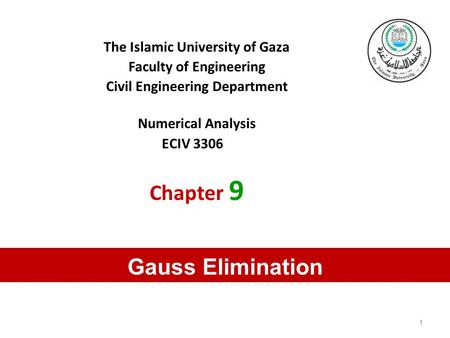 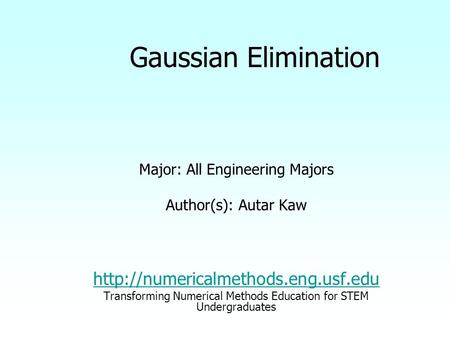 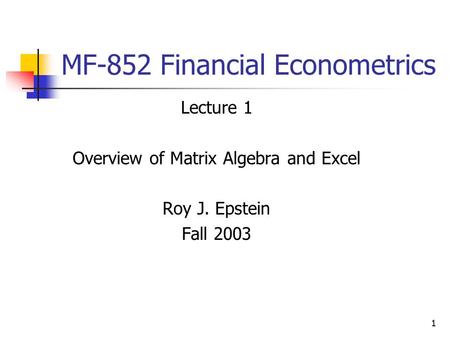 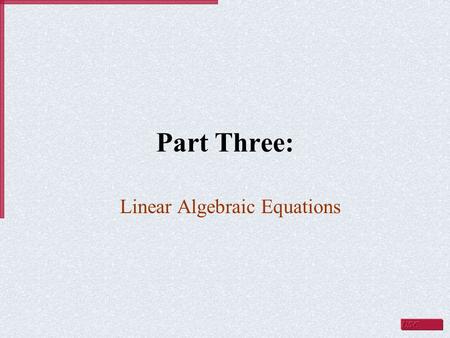 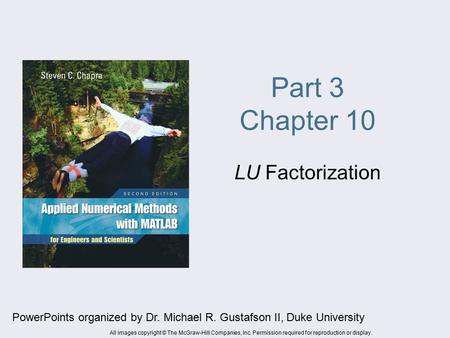 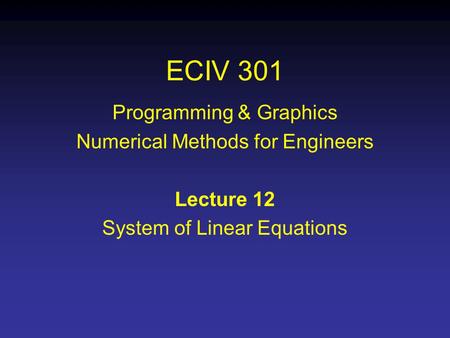 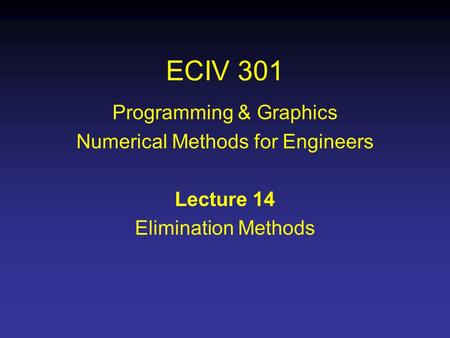 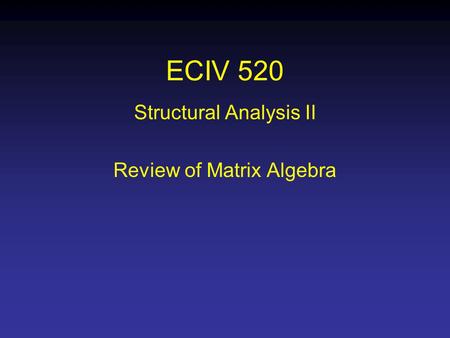 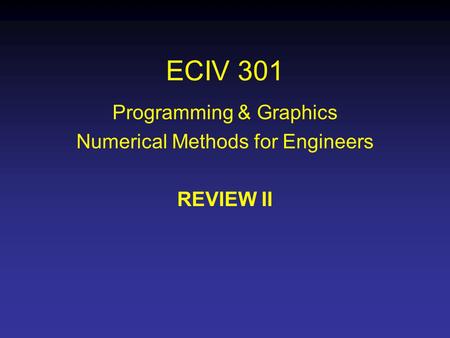 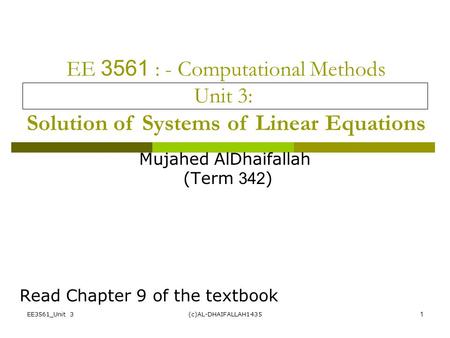 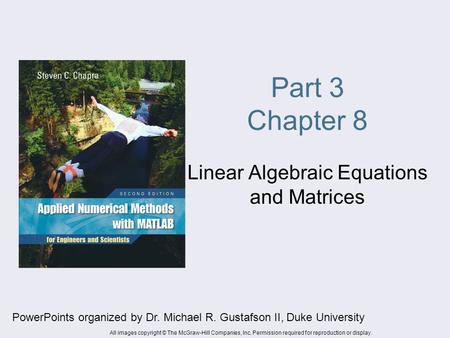