6 Farm Problems In response to the lack of political support from the two main political parties, as well as a lack of support from Congress, farmers therefore formed a union for mutual protection farm union called the Grange Latin for grain demanded laws to reform and regulate the railroads

7 Oliver Hudson Kelley FOUNDER: The National Grange of the Patrons of
Husbandry 1867

11 The Grange formed insurance companies, general stores, warehouses to help farmers lobbied on behalf of member farmers in the government

17 "The railroads are not run for the benefit of the 'dear public' — that cry is all nonsense — they are built by men who invest their money and expect to get a fair percentage on the same.” –William Henry Vanderbilt

20 Granger Law Cases Grange demanded state laws to end railroad abuses
Illinois legislature passed laws regulating rates and other railroad charges other states passed similar laws during the 1870’s state laws challenged in court by railroad companies as a violation of the 14th Amendment (“…no State shall deprive any person of life, liberty, or property without due process of law”)

21 Munn v. Illinois Decision:
a private business could be regulated by the public if that business involved the public interest the Illinois law establishing a maximum charge for the storage of grain was therefore constitutional although interstate commerce was involved the Federal Government was not exercising its right to regulate interstate Commerce in this instance therefore there was no interference or encroachment by the state on federal authority

22 The Supreme Court modified the Munn decision with Wabash v.Illinois

24 Granger Law cases Wabash v. Illinois Decision
railroad rates set by state laws interfered with the exclusive power of the U.S. Congress to regulate interstate commerce therefore the rate –fixing laws of Illinois were unconstitutional the Wabash decision made it impossible for states to deal with railroad abuses

33 Sherman Anti-Trust Act 1890
OUTLAWED: “Every contract, combination, or conspiracy in restraint of trade or commerce among the several states, or with foreign nations”. Senator John Sherman

36 Inflation Farmers blamed scarcity of money on low farm prices:
wanted federal government to bring about inflation{price increases} by coining more silver (sixteen ounces of silver equaled one ounce of gold in value) therefore proposed money be backed by gold and silver at “16 to 1 ratio”

38 Bland – Allison Act (1878): Required the Federal Government to buy a set amount (b/t $2 & $4 million) of silver each year to be minted into coins Too much silver being produced & not enough absorbed by coinage Value fell to 20:1 Vetoed by President Rutherford B. Hayes, the Congress overrode Hayes' veto to enact the law.

43 McKinley Tariff Act {1890} Imposed a 50% tariff on foreign import
highest tariff of nineteenth century In return for its passage, the Sherman Silver Act was given Republican support. The McKinley Tariff Act raised tariffs and brought new trouble to farmers, who were forced to buy high-priced, protected products from American manufacturers but sell their own products into highly competitive, unprotected world markets.

53 William Jennings Bryan
Supported for President by the following political parties: Democrats Populists Bryan made “Cross of Gold” speech at Democratic Party Convention: attacked gold standard “You shall not crucify mankind upon a cross of gold”

54 Bryan’s Cross of Gold Speech
“You shall not crucify mankind upon a cross of gold”. William Jennings Bryan

58 William McKinley Conservative Ohio politician McKinley:
the opposite of Bryan McKinley: favored gold standard, high tariffs, non-interference by the government with business supported by bankers and industrialists most political support in the Northeast 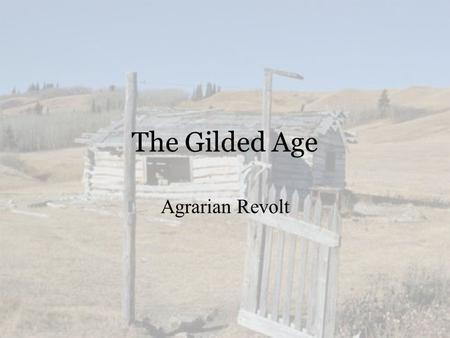 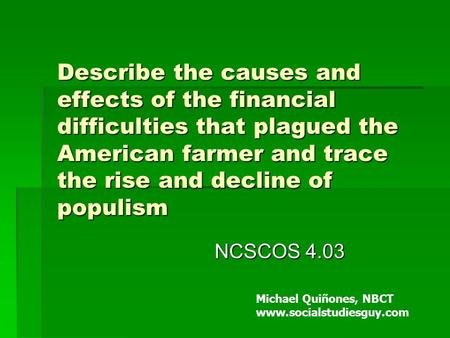