3 Essential Questions What is feudalism?
Explain the social class system in feudal society. Explain life on a manor. Why did towns and trade grow?

4 Feudalism and Manor Life
The Big Idea A complex web of duties and obligations governed relationships between people in the Middle Ages. Main Ideas Feudalism governed how knights and nobles dealt with each other. Feudalism spread through most of Europe. The manor system dominated Europe’s economy. Towns and trade grew and helped end the feudal system.

5 Why Feudalism? When the Vikings, Magyars, and Muslims began their raids in the 800s, the Frankish kings could not defend their empire. As a result, the power of nobles grew and kings became less powerful. Nobles remained loyal to the king, but created a system to effectively rule independent territories.

8 Main Idea 1: Feudalism governed how knights and nobles dealt which each other.
To defend their lands, nobles needed soldiers. The best soldiers were knights, warriors who fought on horseback. Knights needed weapons, armor, and horses, so nobles gave land to the knights to support them. A knight who promised to support a lord in exchange for land was called a vassal. Feudalism was a system of promises that governed the relationships between lords and vassals.

10 Lords Lords sent help to the vassals if they were attacked.
They built castles to defend themselves against attack. The lords could not punish the vassals without good reason. If a lord failed to do what he was supposed to, the vassal could break all ties with him.

11 Vassals Served their lords in times of war
Gave money to their lords on special occasions such as weddings Gave their lords food and shelter whenever they came to visit.

12 Main Idea 2: Feudalism spread through much of Europe.
Feudalism was created by the Franks, but the system spread to other countries. Frankish knights introduced feudalism into northern Italy, Spain, and Germany. Feudalism then spread to eastern Europe and to England.

13 William the Conqueror A French noble named William was the duke of Normandy when it decided to conquer England. The duke invaded England in 1066 and became known as William the Conqueror. William and his men defeated the English, and William declared himself king of England. He gave his knights land in return for their loyalty. This was the beginning of feudalism in England.

14 Main Idea 3: The manor system dominated Europe’s economy.
When knights received land from their kings, they did not have time to farm it. At the same time, there were poor people who needed a way to grow food. The manor system was a way to take care of both problems.

15 The Manor System A large estate owned by a knight or lord was called a manor. The manor included a large house or castle, pastures, fields, and forests. Most medieval lords kept one-half to one-third of the land for themselves. The rest of the land was divided among peasants and serfs, workers who were tied to the land on which they lived.

16 Serfs and Peasants Although they were not slaves, they could not leave the land without permission. They spent most of their time working for the lord in exchange for a small piece of land. Farm labor was hard, and everyone worked, even children. The lords wanted people to produce everything they needed to live.

17 Manor Lords The lords controlled everything that happened on their land. They resolved disputes and collected taxes from the people on their land. The lords lived more comfortably than the serfs and peasants, but they still had to worry about disease and warfare.

19 Main Idea 4: Towns and trade grew and helped end the feudal system.
During the Middle Ages, most people lived on farms, and towns were small. After about 1000 AD, things began to change, as some towns turned into big cities.

20 Growth of Towns and Trade
More people lived in Europe because more food was available. New technology, such as a heavier plow and the horse collar, meant that farmers could be more productive. Trade increased as the population grew and trade routes began to develop across Europe. People began to leave the farms and move to the towns in order to make more money.

23 Explain the Lord and Vassal Agreement

27 What is feudalism (political system)? Who created it? How did it spread?

29 What is a manor? Explain this economic system.

31 Explain the lives of serfs and peasants.

32 How were serfs and peasants different?

33 Explain the job and expectations of a manor lord?

35 What led to the growth of towns and trade in the Middle Ages?

39 Essential Questions Though Europe and Japan were similar, what were their cultural differences?

43 Main Idea 1: Feudal societies shared common elements in Europe and Japan.
Feudalism was not used only in Europe. There was also a very similar system in place in Japan.

44 Lords and Vassals Kings and lords were like the emperors and daimyo, or landowners, of Japan. They controlled the lands and had warriors who helped them defend their property. In Europe the warriors were known as knights. In Japan they were known as samurai.

46 Main Idea 2: Europe and Japan differed in their cultural elements such as religion and art.
Europe and Japan were similar in some ways, such as the feudal system. However, they also had cultures that were very different.

47 Differences between Europe and Japan
European art was mainly about religion and depicting scenes from the Bible. Japanese art was about nature and beauty. Art Nearly all Europeans were Christian. The Japanese blended elements of Buddhism, Shinto, and Confucianism. Religion

48 Chapter 17-4 Quick Questions
According to the code of chivalry, how were knights required to behave? How did knights and samurai react when faced with difficult odds? How were the feudal systems of Europe and Japan different? What was the main difference between medieval Europeans and Japanese? How did the subjects of European art and Japanese art differ? Which were greater, the similarities or the differences between European and Japanese societies in the Middle Ages? 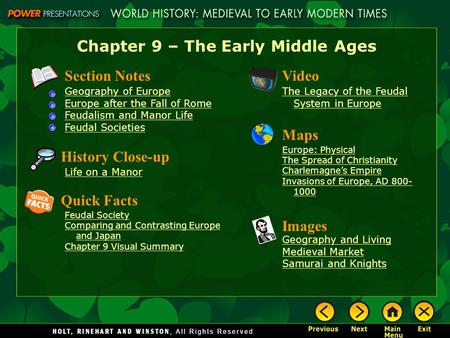 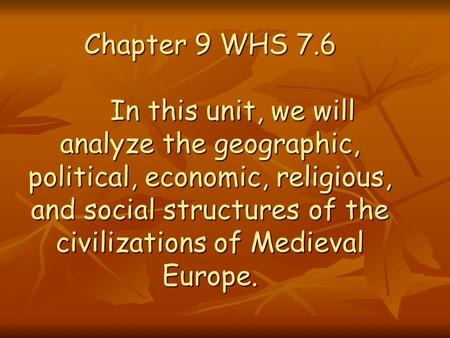 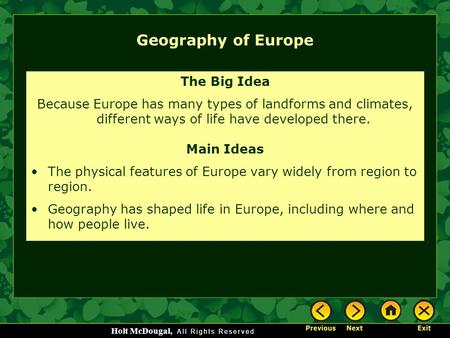 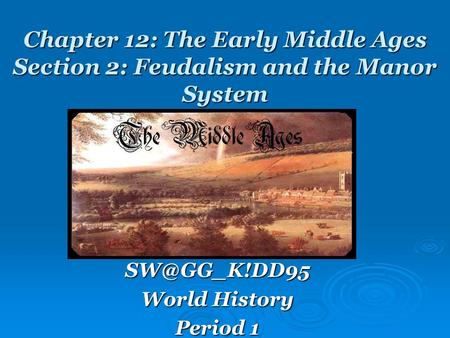