1 PHYSICAL PROPERTIES OF SPEECH SOUNDS
We have concentrated for the most part on the articulatory description of speech sounds We describe consonants and vowels, the basic units of speech sounds, along several parameters: Articulatorily, consonants are described using three main parameters: State of the glottis (voiced/voiceless consonants) Place or point of articulation (bilabial, velar, etc.) Manner of articulation (stop/plosive, fricative, etc.)

2 Vowels are defined in terms of different set of criteria
The parameters for vowel classification are: The height of the tongue ( high, mid, low vowels) The position of the tongue (front, central, back vowels) The rounding of the lips (rounded/unrounded vowels) The tongue root position (tense/lax or ±ATR vowels) Using the IPA we can represent vowels in a chart such as that below [i] high front tense unrounded vowel [u] high back rounded tense vowel

3 ACOUSTIC PROPERTIES OF SPEECH SOUNDS
Besides those articulatory parameters, we can hear and study sounds based on their physically quantifiable features Speech as we have discovered is a continuous flow of varying air pressure Variations in air pressure in the form of sound waves move through the air somewhat like ripples and on reaching the ear cause the eardrum to vibrate

5 READING ACOUSTIC DISPLAY
A display of a wave may not give a clue as to the exact nature of the sound. However, the manner of articulation is often clear If what is said is known, one can make some clear judgments about manner transitions from one point to the other in wave display

8 PROPERTIES OF SOUND WAVES
Sound waves originate from the movement of sound source or ‘piston’ , for example: Tuning fork (Jensen – p.18) The vibration of a tuning fork will produce a sine wave – a regular or periodic wave Other vibrating bodies such as vocal cords: Vocal cords produce both periodic and irregular wave forms – aperiodic wave

9 ELEMENTS OF SIMPLE SOUND WAVES
THERE ARE TWO MAJOR FEATURES OF A SIMPLE SOUND WAVE FREQUENCY (MEASURED IN HERTZ (Hz)) This denotes the number of cycles of a sound wave per second (2Hz = 2 cycles per sec, etc.). AMPLITUDE (MEASURED IN DECIBELS (dB)) The maximum displacement of sound wave. Amplitude in auditory terms is called LOUDNESS

12 RESONANCE THE QUALITY OF CERTAIN SPEECH SOUND DEPENDS ON ADDITIONAL ACOUSTIC FEATURES: There is resonance from three major chambers: Pharyngeal cavity Oral cavity Nasal cavity The frequencies associated with these cavities are called: a. pharynx resonance = F1 b. oral resonance = F2 c. nasal = F3 These are most useful for distinguishing different vowel types in languages (Ladefoged 2001: 172 for AmE)

14 [+flat] sounds are labialized, retroflexed, uvularized, pharyngealized (vis-à-vis other sounds with otherwise identical feature composition, e.g., /i/ = [-flat]; [y] = [+flat]) Prediction: no language will make us of [+flat] in more than one of the above articulatory ways, e.g., no uvualrs plus retroflexes; if retroflexes, then no uvulars; if distinctive rounding, then no retroflexes, etc. This claim is not absolutely true but it is valid statistically. There is no basis for this claim with a purely articulatory descriptive system. 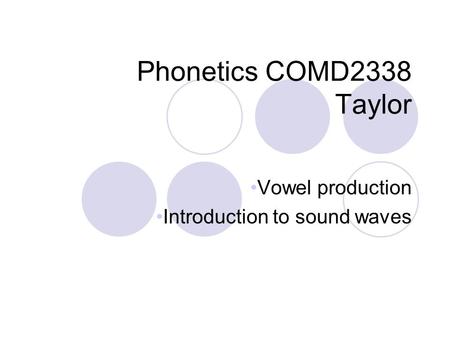 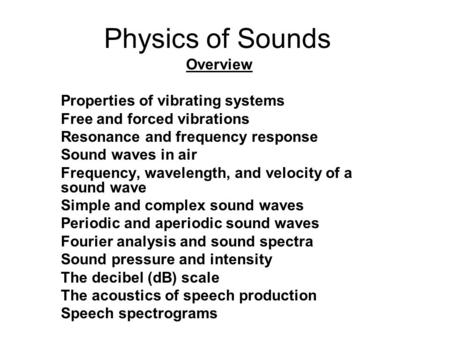 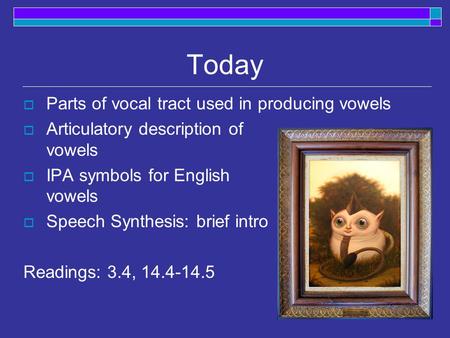 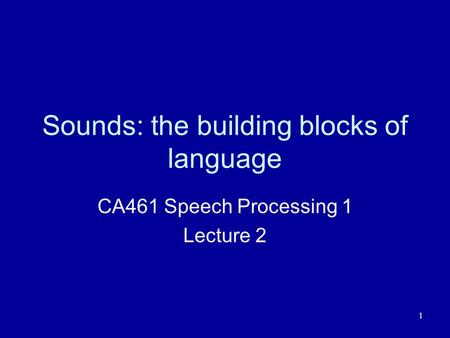