7 1972 London [Dumping] Convention and its 1996 Protocol
Parties agree to “promote the effective control of all sources of pollution of the marine environment” Regulates disposal of land-based wastes at sea 1996 Protocol now incorporates a precautionary approach anything not listed in Annex 1 cannot be dumped at sea 2006 Amendment to Protocol permits storage of CO2 under the seabed.

8 1972 Convention: Article 1 Contracting States shall individually and collectively promote the effective control of all sources of pollution of the marine environment and pledge themselves especially to take all practical steps to prevent the pollution of the sea by the dumping of wastes and other matter….

9 1996 Protocol Contracting Parties shall individually and collectively protect and preserve the marine environment from all sources of pollution and take effective measures, according to their scientific, technical and economic capabilities, to prevent, reduce and where practicable eliminate pollution caused by dumping or incineration at sea of wastes or other matter.

10 Customary International Law
States shall: Fulfil in good faith [their] obligations under general principles and rules of international Law Not allow activities under national control to damage territory of other states or areas beyond national jurisdiction Use a Precautionary Approach Prior assessment ?

11 Precautionary Principle
1992 Rio Declaration: Principle 15 “In order to protect the environment, the precautionary approach shall be widely applied by states according to their capabilities. Where there are threats of serious or irreversible damage, lack of full scientific certainty shall not be used as a reason for postponing cost effective measure to prevent environmental degradation”

12 1992 UN Framework Convention on Climate Change
General obligations address stabilization of climate by sources and use of sinks (art 4.1.d) “should take precautionary measures ... lack of scientific certainty should not be used as a reason for postponing such measures ... which [should] ... cover all relevant sources, sinks and reservoirs of GHGs...” (art 3.2) “...use appropriate methods, e.g. impact assessments..., with a view to minimising adverse effects on... the quality of the environment” (art 4.1.f)

14 Kyoto Protocol 1997 Developed Countries (Annex I of UNFCCC) agreed GHG emissions reductions from 1990 levels by an average of 5.2% Commitment period is Specific targets (or assigned amounts) were set out in Annex B of the Protocol, Iceland 10%+ Australia 8%+ European Union 8% reduction Japan 7% US 6%

18 Conditions for Participation in CDM
Must be voluntary; Between Parties to Kyoto projects must manifest real measurable and long-term benefits relating to mitigation of climate change; and a project activity must be “additional” to that which would have occurred in its absence. Participation in the CDM is also open to the involvement of private and/or public entities, subject to the guidance of the Executive Board. “sink projects in principle eligible” – pending decisions of CoP/MoP

21 1982 Law of the Sea Convention
Art 1 (1)(4) ‘Pollution of the marine environment’ means the introduction by man, directly or indirectly, of substances or energy into the marine environment … which results or is likely to result in such deleterious effects as harm to living resources and marine life, hazards to human health, hindrance to marine activities, including fishing and other legitimate uses of the sea, impairment of quality for use of seawater and reduction of amenities; General Obligations “to protect and preserve the marine environment” (art 192) Take all measures “consistent with this Convention to prevent, reduce and control pollution” from all sources

22 Dumping 1982 Law of the Sea Convention
Article 1(1)(5) ‘dumping’ means Any deliberate disposal of wastes or other matter from vessels, aircraft, platforms or other man made structures at sea; Article (1)(5) (b) ‘dumping’ does not include: (ii) placement of matters for a purpose other than the mere disposal thereof, provided that such placement is not contrary to the purposes of this Convention BUT : is this Dumping of Carbon ? From vessels etc

23 1972 London Convention Art 1 ‘dumping’ does not include
Placement of matter for a purpose other the mere disposal thereof, provided that such placement is not contrary to the aims of the Convention 1996 Protocol One of the most important innovations is to introduce (in Article 3) what is known as the "precautionary approach". This requires that "appropriate preventative measures are taken when there is reason to believe that wastes or other matter introduced into the marine environment are likely to cause harm even when there is no conclusive evidence to prove a causal relation between inputs and their effects.

24 1996 London Protocol In implementing this Protocol, Contracting Parties shall apply a precautionary approach to environmental protection from dumping of wastes or other matter whereby appropriate preventative measures are taken when there is reason to believe that wastes or other matter introduced into the marine environment are likely to cause harm even when there is no conclusive evidence to prove a causal relation between inputs and their effects.

25 Can OIF projects be brought within the Kyoto regime
Kyoto is a state to state System: Must be clear state ownership, Must be a host country, Must be an acquiring country. No category under CDM or JI under which the projects could be classified No general accounting for GHG stored in Oceans, it will be difficult to create such category as it falls outside the IPCC reporting guidelines Permanence and project specificity is a problem. Project boundaries: can periodic monitoring and verification be ensured ?

26 Conclusions If an activity is likely to “result in such deleterious effects as harm to living resources and marine life” then it is “pollution” States have an obligation to prevent, reduce and control pollution Deliberate dispersal of iron is probably not dumping (ie not disposal) but may come within the general mandate of the London Convention and its 1996 Protocol

27 Conclusions 2 OIF may in principle be justifiable by States – or under their direct authority - under general obligations of UNFCCC but there is an obligation to use “appropriate methods:” (ie impact assessment) to minimize adverse effects OIF does not meet the current criteria for project registration under Kyoto Protocol Responsibility of national governments to police the informal private market for emission credits 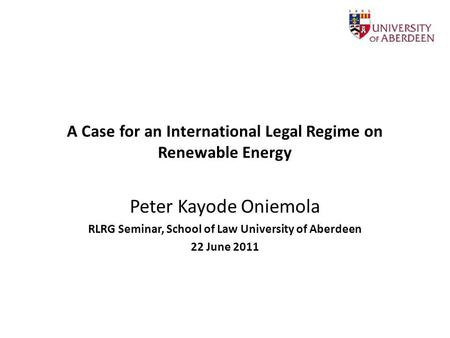 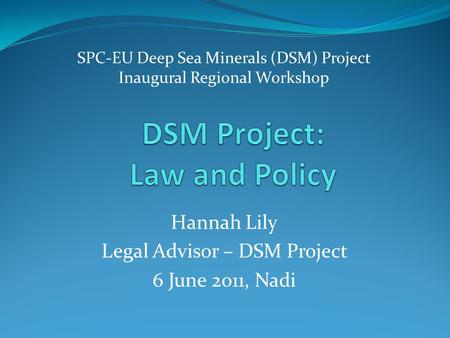 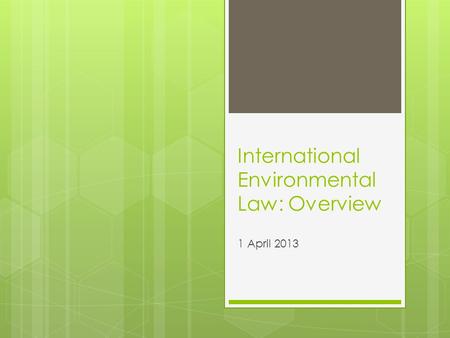 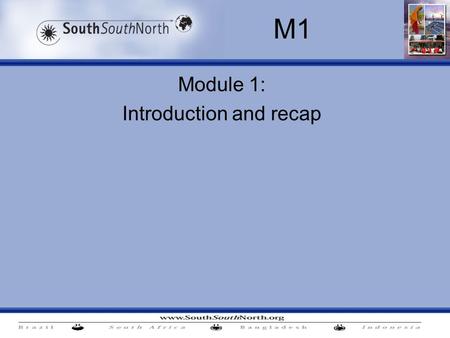 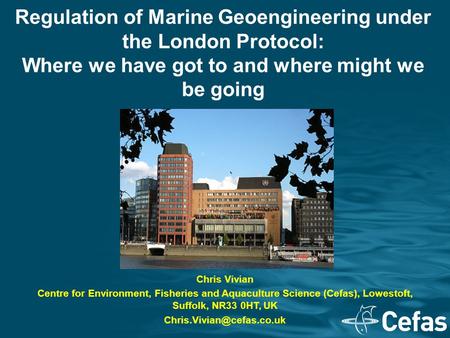 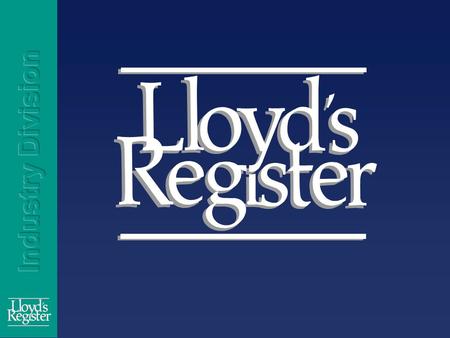 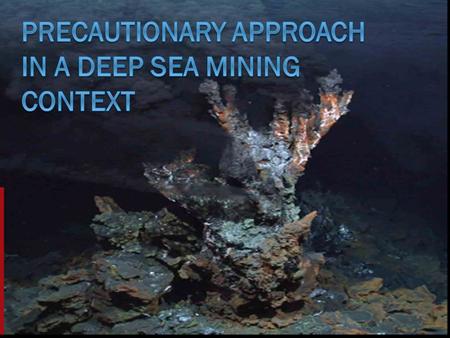 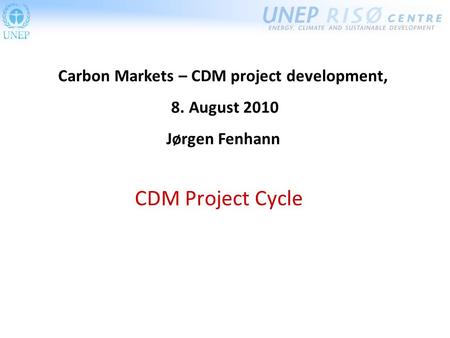 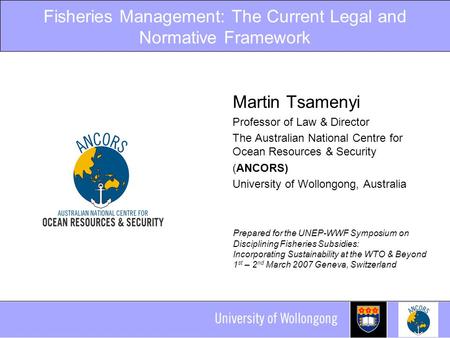 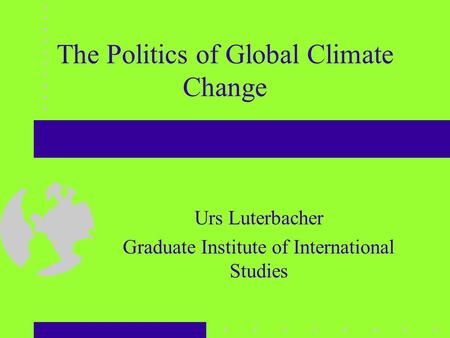 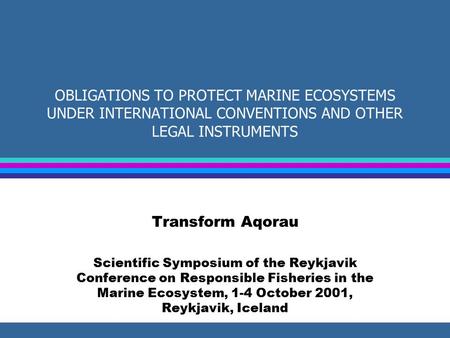 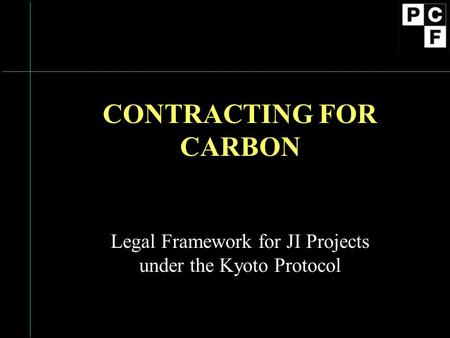 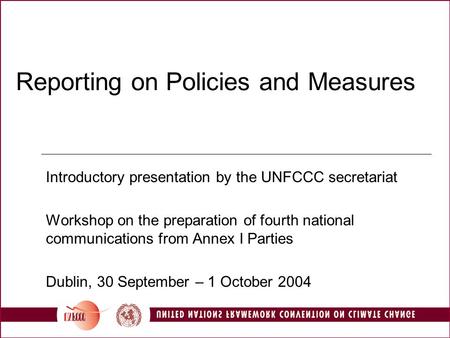 Reporting on Policies and Measures Introductory presentation by the UNFCCC secretariat Workshop on the preparation of fourth national communications from. 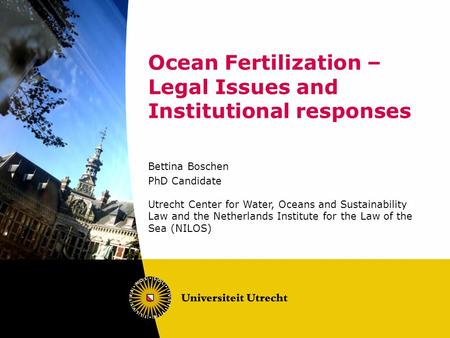 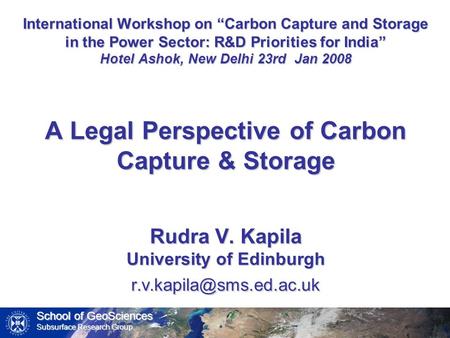